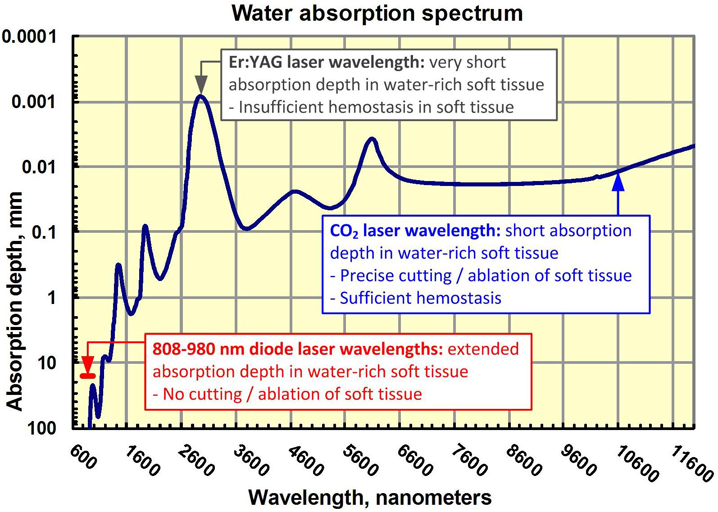 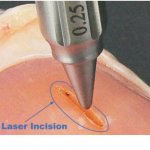 Figure 2 illustrates the interaction of CO2 laser light at 10,600 nm with fresh poultry muscle tissue. The CO2 laser beam from the Aesculight laser-focused to a 0.25 mm spot size at 5-watts continuous wave in SuperPulse mode, produces a clean incision with char-free (carbon-free with no evidence of burning) margins with minimal thermal damage.

The CO2 laser-tissue interaction is always predictable and is based on:

Why Not a Diode Laser?

Because their 800-1,000 nm wavelengths are poorly absorbed by soft tissue, diodes are used exclusively as THERMAL devices. There is no diode laser beam-tissue interaction beyond glass tip “activation,” and such an activated diode laser glass tip is essentially a “hot tip.” Diodes are never used surgically in order to avoid a massive spread of thermal necrosis. The red-hot glass tip is used to very slowly “poke, burn and pick” tiny amounts of oral-mucosa, similar to electrosurgery, branding irons, or hot picks. I.e. the diode is a thermal instrument and not a laser.

Why Should the Diode Laser Glass Tip Be Activated?

The key to soft tissue removal with the diode laser is the carbon-rich black ink or char deposited on the diode laser fiberglass tip in order to “initiate” or “activate” it – see Figure 5A. The char absorbs the diode laser light and blocks it inside the glass tip. The glass tip then heats up to a temperature at which it can burn the soft tissue upon contact – see Figure 6B. Such thermal tissue removal is a slow heat-conduction process that depends on how charred and hot the glass tip is. That is to say, THERE IS NO DIODE LASER BEAM-TISSUE INTERACTION BEYOND TIP ACTIVATION. Slow tissue removal induced thermal necrosis up to 6 mm deep[3] is manifested by 1) extensive char left at the margins of incision and by 2) white “seared” discoloration outside of the charred margins of incision seen in Figure 5B. An often overlooked aspect of using a hot charred glass tip for soft tissue removal is the thermal stress induced fracture of the fiber and loss of the broken tip inside the tissue – see Figure 6. 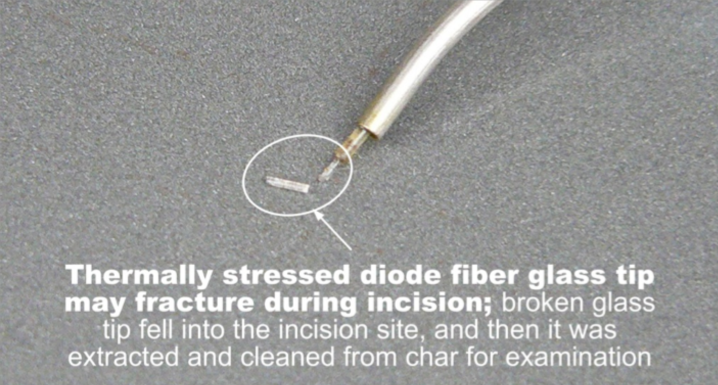 Why Not a YAG laser?

The Er:YAG laser wavelength’s extinction depth in soft tissue is ten times shorter than the CO2 laser wavelength. The Er:YAG is sufficient at cutting soft tissue but is detrimental for hemostasis, so it is most useful in water-rich hard tissue applications where hemostasis is not needed. Furthermore, Er:YAG lasers require complex power supplies, cooling systems, and beam delivery devices that are expensive for the end-user and have high maintenance costs.

Why a CO2 Veterinary Laser?

The CO2 laser has been used for veterinary procedures since the 1960s and millions of CO2 laser procedures have been performed with Luxar-Aesculight-VetScalpel flexible fibers to date since 1991.

The CO2 laser wavelength of 10,600nm is universally regarded by surgical specialists as best suited for soft tissue laser surgery, due to its very thin extinction depth and excellent hemostasis. Its wavelength is absorbed by soft tissue 10-100 times better than the diode wavelength.

Why Are CO2 Veterinary Lasers Better than “All-Tissue Lasers”?

Currently, there is no laser wavelength that works equally well on both hard and soft tissues.

Char-Free CO2 Laser Surgery: What is SuperPulse mode and what are its clinical advantages?

The SuperPulse mode was invented in the 1990s. Instead of an uninterrupted flow of laser power, SuperPulse mode produces a continual series of short, high peak power bursts or pulses. SuperPulse provides a greater rate of tissue ablation, with less heat propagation into surrounding tissues. SuperPulse CO2 lasers minimize collateral thermal damage to adjacent tissue, which leads to considerably less char, wound contraction, and faster healing. Because SuperPulse mode has a higher ablation rate than regular CW mode, it is ideal for procedures in which thermal damage needs to be minimized while the tissue removal rate needs to be maximized (e.g. faster and deeper cutting). 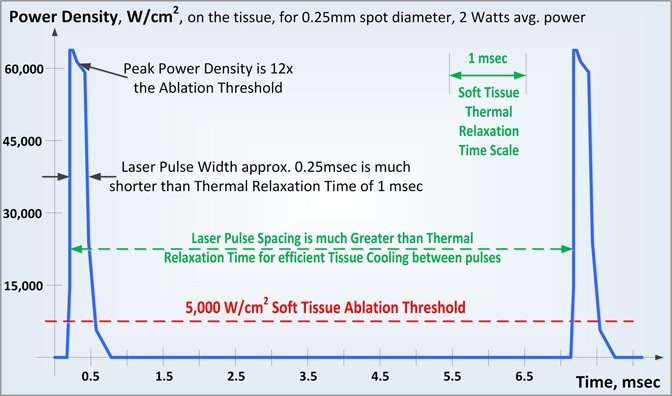 CO2 laser light’s ability to ablate and cut the water-rich soft tissue with maximum precision and minimal collateral thermal effects[1] makes it a true “What You See Is What You Get” surgical laser with a short learning curve and a great variety of uses in dentistry, OMS, ENT, dermatology, general surgery, podiatry, etc.

Diode veterinary laser light does not ablate the water-rich soft tissue such as muscle tissue or low pigmentation skin; it is used indirectly to heat up the optically “black” char on the tip of glass fiber. Then the hot charred glass tip cuts the tissue by burning it away upon contact. Excessive char and thermal necrosis along with the possibility of a thermal stress-induced fracture of the glass tip inside the surgical site make the diode veterinary laser a “What You Don’t See Can Hurt You” tool for soft tissue surgery. A diode’s fiber hot glass tip is best used surgically where the use of CO2 lasers is limited (fluid-filled surgical site or with flexible endoscopes), while diode laser light has a number of non-surgical applications such as Biostimulation, etc.

Try Our Laser In Your Office! Take a Test Drive

© 2023 VetScalpel. Made in the USA. All rights reserved. Terms, pricing, specifications and availability are subject to change without notice.