By William E. Schultz, DVM For the Education Center
Originally Published In Veterinary Practice News, May 2017 – Download as a PDF

Urethral prolapse is a protrusion of the urethral mucosa beyond the end of the penis.[1] Although recorded in other breeds, urethral prolapse is diagnosed more often in young male English bulldogs and Boston terriers. Although its exact cause is unknown, urethral prolapse is reported to be the result of sexual excitement or may be associated with genitourinary infections, or both.[1,2] Urethral prolapse is not common. The clinical signs are occasional bleeding, tenesmus and a sprayed rather than focused urine stream. Owners may notice a bulbous dark red to purple area on the tip of the penis. Some dogs may excessively lick the affected area, which may cause trauma to the exposed urethra. Self-inflicted trauma or drying may lead to necrosis of the protruding urethral mucosa.

Other issues potentially can cause hematuria and/or penile bleeding. During examination, the clinician should exclude such problems as urethritis, penile fractures, preputial, penile or urethral neoplasia, urethral stricture, urethral calculi, and prostate issues. Urinary tract infections also should be ruled out.

The recommended treatment of the prolapsed urethral mucosa is surgical resection. Traditionally, this procedure has been done with a scalpel and some form of a tourniquet to control bleeding in the operative field.[2] When performed with a CO2 laser, a tourniquet is unnecessary, and the visual field remains clear throughout the surgery.

Olaf, a 9-month-old intact male English bulldog, presented with a one-month history of mild to moderate bleeding from the sheath and occasional tenesmus, with no urine production. He was an otherwise healthy dog with no other clinical problems. Physical examination revealed a urethral prolapse characterized by a deep red, small, doughnut-shaped mass protruding from the distal end of the penis (Figure 1). 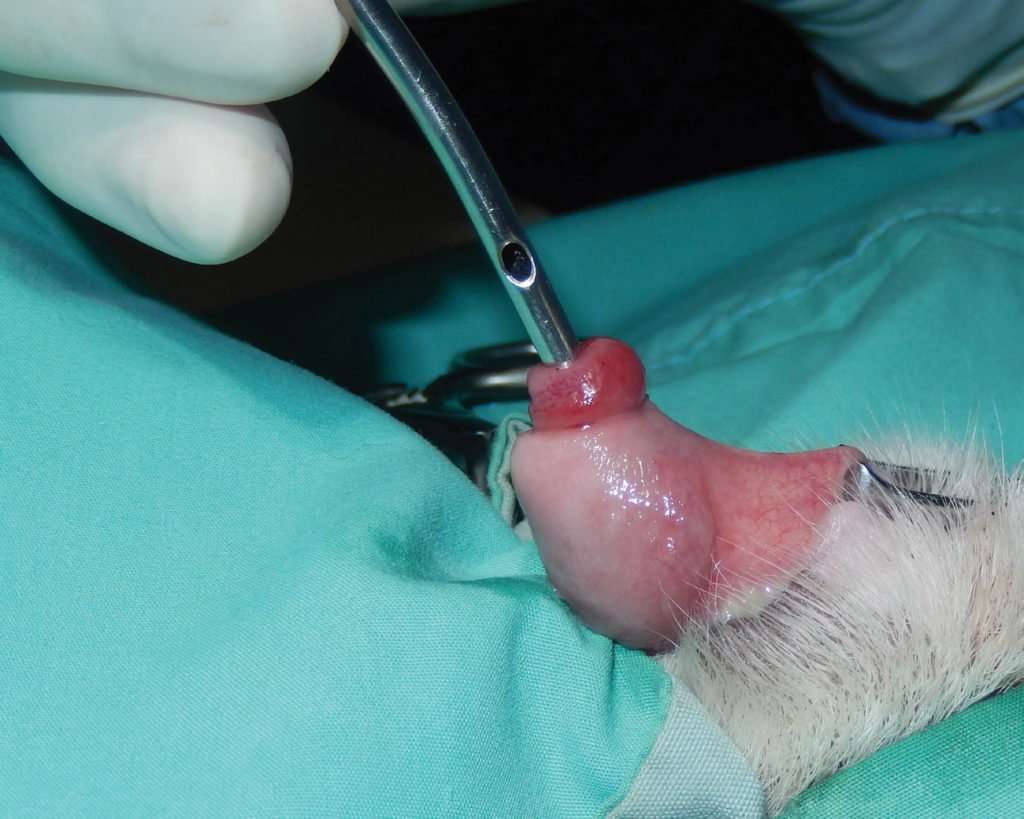 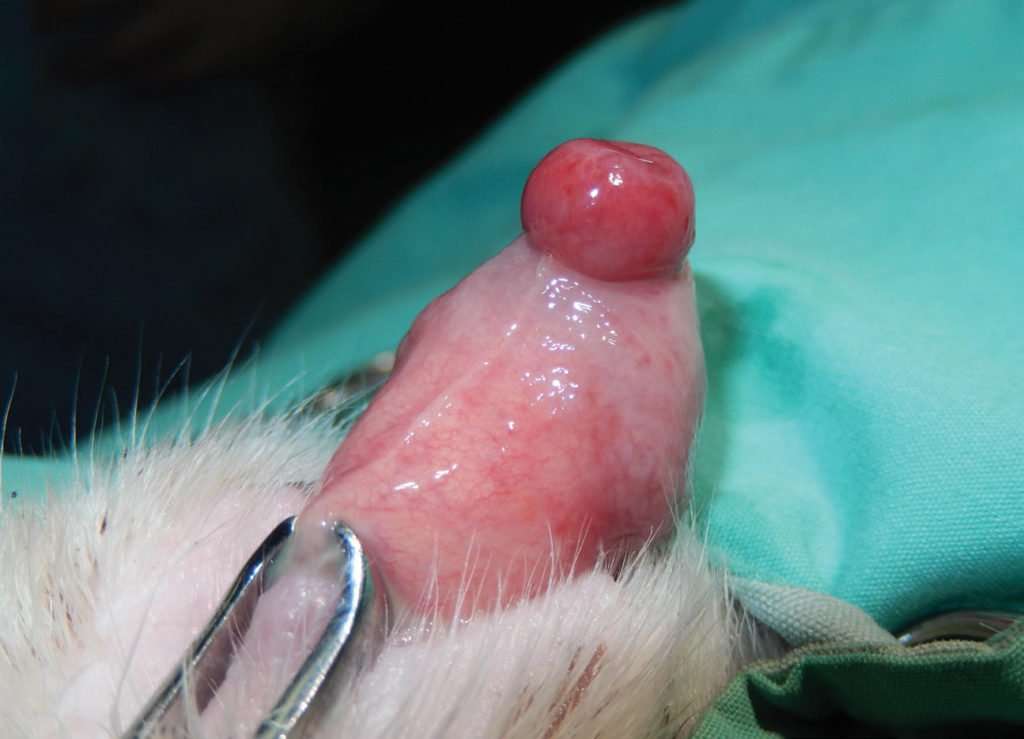 Figure 2: Metal catheter was placed as a backstop.

Preanesthetic complete blood count and chemistry panel were normal. The patient was premedicated with torbutrol. General anesthesia was induced with propofol 28 and maintained with sevoflurane in oxygen via an endotracheal tube. Additionally, buprenorphine (analgesic) and carprofen (anti-inflammatory/analgesic) were administered parenterally during the anesthesia and prior to the procedure.

A 20-watt Aesculight surgical CO2 laser (by LightScalpel LLC, Bothell, Wash.) with a flexible hollow waveguide and tipless handpiece with a 0.4-millimeter focal spot size were used. The laser was set at 8 to 10 watts continuous wave for the procedure. This setting allows for minimal tissue damage while controlling intraoperative hemorrhage.

The patient was placed in dorsal recumbency. The penis was extruded from the sheath and cleaned with dilute chlorhexidine. Allis tissue forceps were used to keep the sheath retracted (Figures 1 through 10). A metal urinary catheter was placed in the penile urethra (Figure 2). Plastic catheter is not recommended, as the laser beam might melt it. Small splinter forceps were used to create tension thus facilitating laser incision (Figure 3-A).

The surgery started on the ventral surface of the penis. A small incision (3 to 4 millimeters) was made at the base of the prolapse through both penile and urethral mucosa to the level of the catheter (Figures 3-A and 3-B). The laser always was directed at a 90-degree angle toward the target tissue. The incision was examined, and any char was removed from the site with a saline-soaked gauze pad (Figure 3-C). The urethra was then grasped with tissue forceps and sutured to the proximal penile tissue in order to prevent the retraction of the urethral mucosa within the tip of the penis (Figures 4-A and 4-B). 4-0 Monocryl sutures were placed. The incision was advanced circumferentially, with sutures placed in an interrupted pattern until the entire prolapsed tissue was removed (Figures 5 through 9). 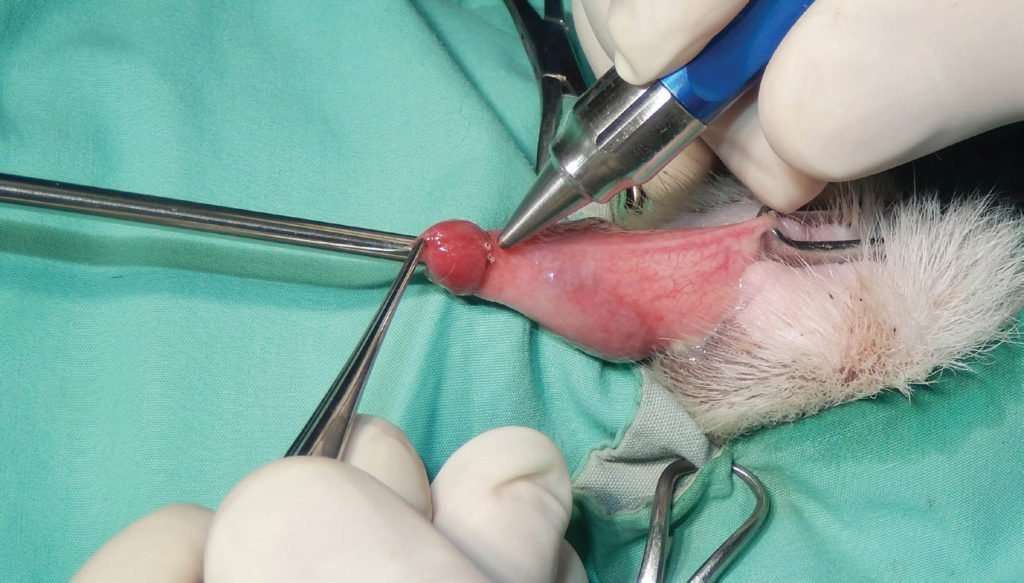 Figure 3-A: Tension was applied to the exposed urethral tissue to facilitate laser incision. 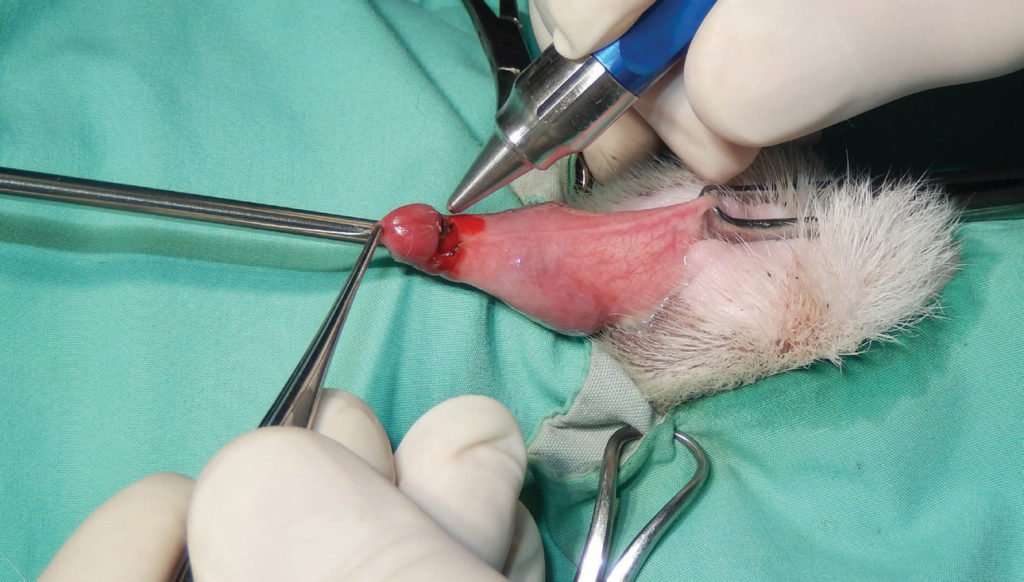 Figure 3-B: Small incision was made through the urethral and penile tissues on the ventral part of the penis. 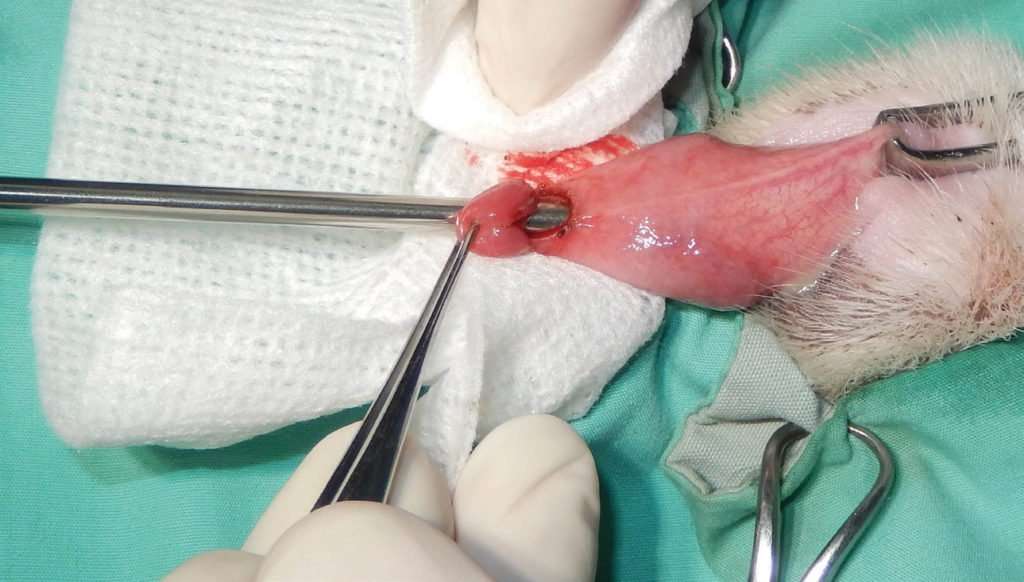 Figure 3-C: Any char was removed from the site. 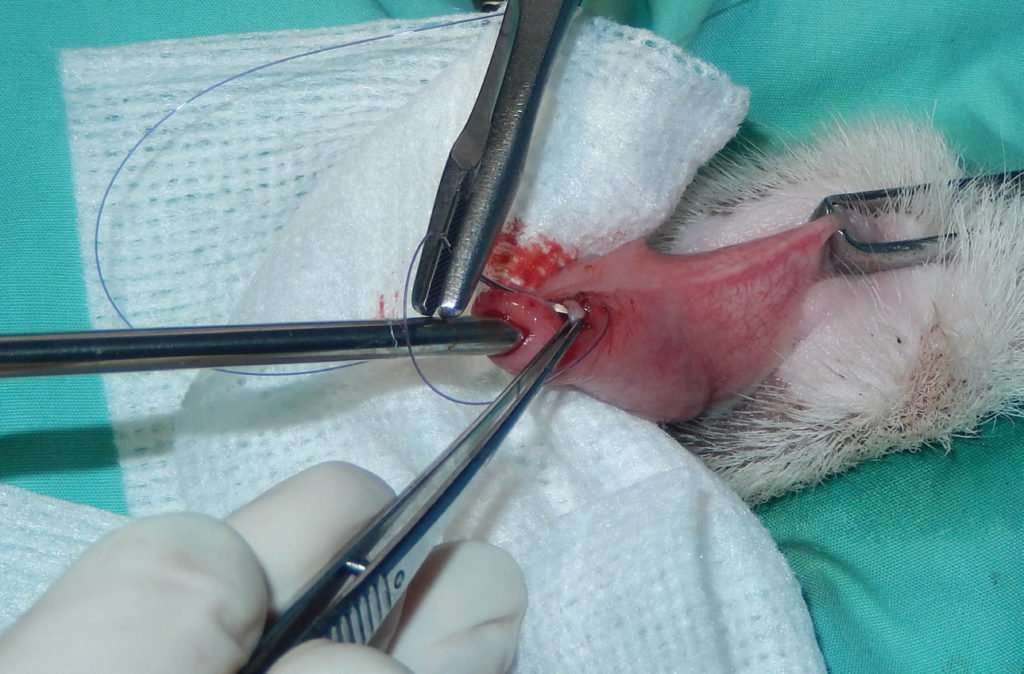 Figure 4-A: The urethral mucosa was sutured to the penile mucosa to prevent urethral retraction. 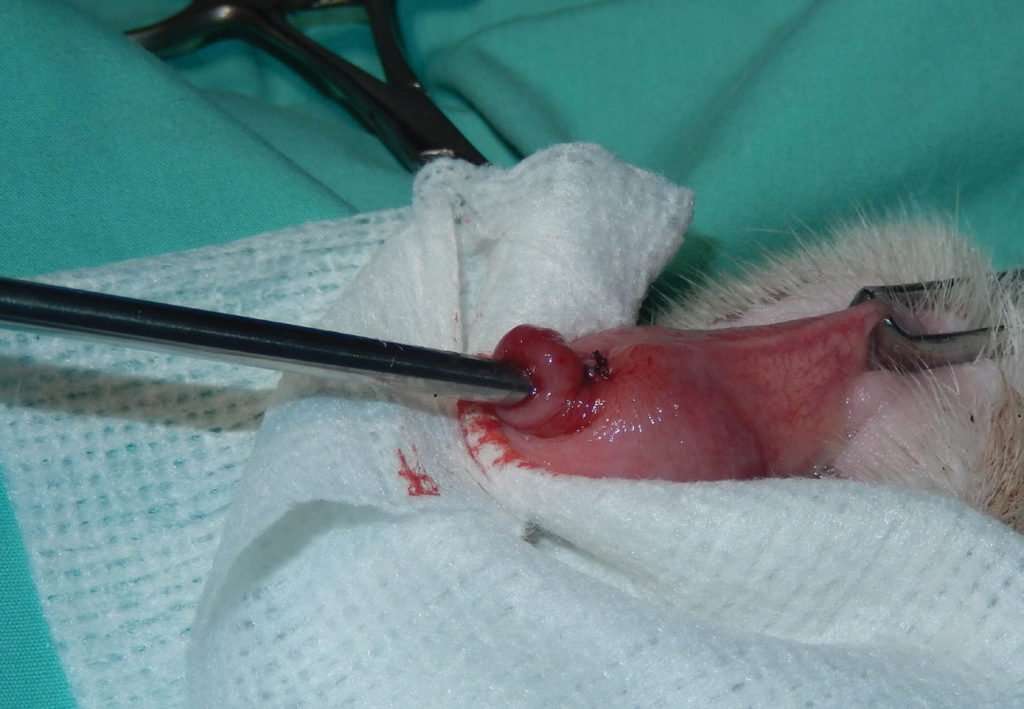 Figure 4-B: This technique removes the need for stay sutures. 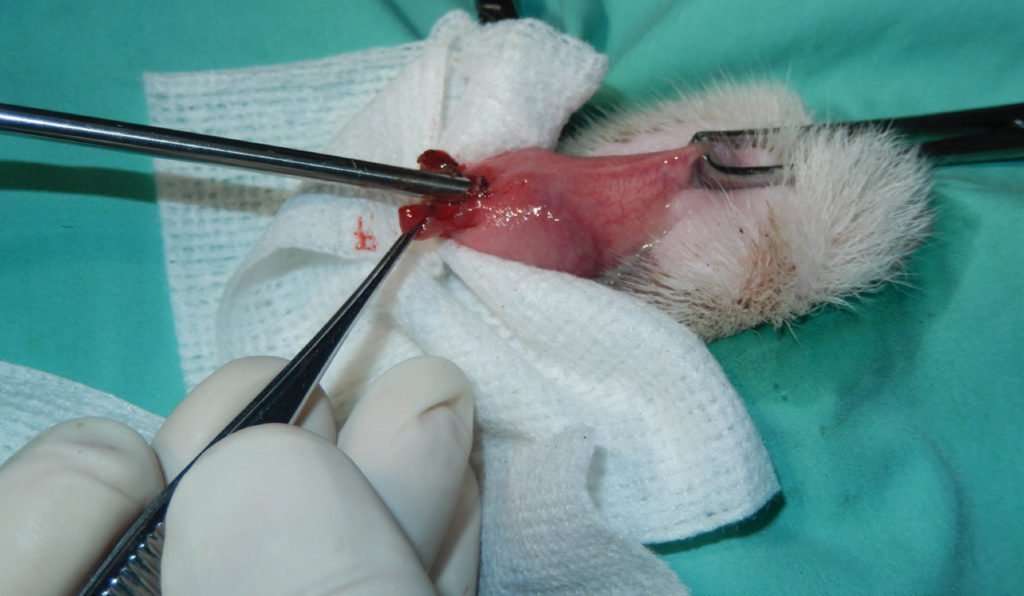 Figure 5: The incision was extended slightly around the circumference. 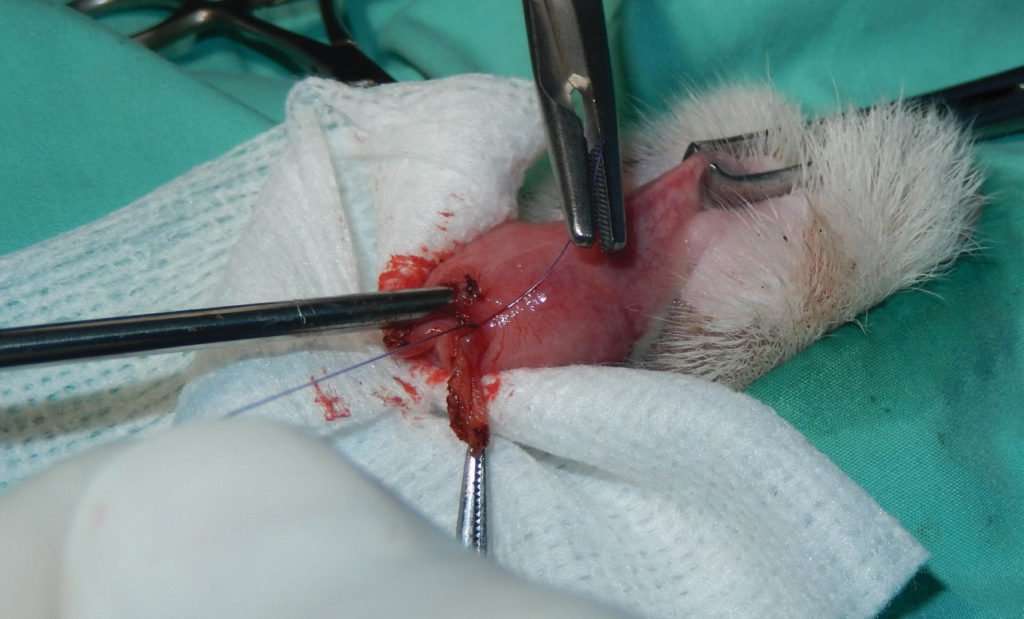 Figure 6: The incised urethral and penile mucosa were sutured together. 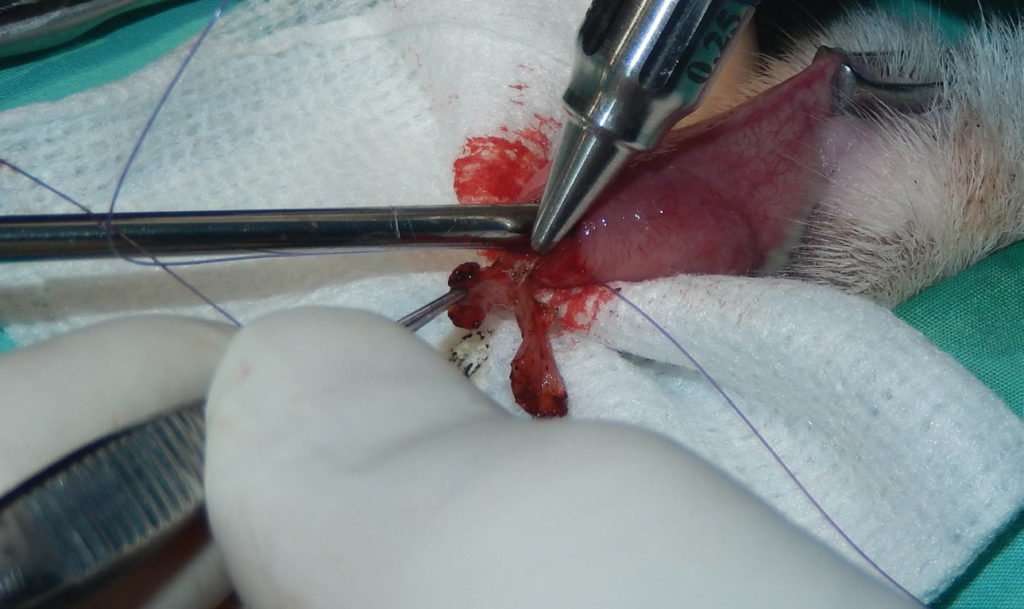 Figure 7: Gradual resection was advanced circumferentially until the entire prolapsed tissue was removed. 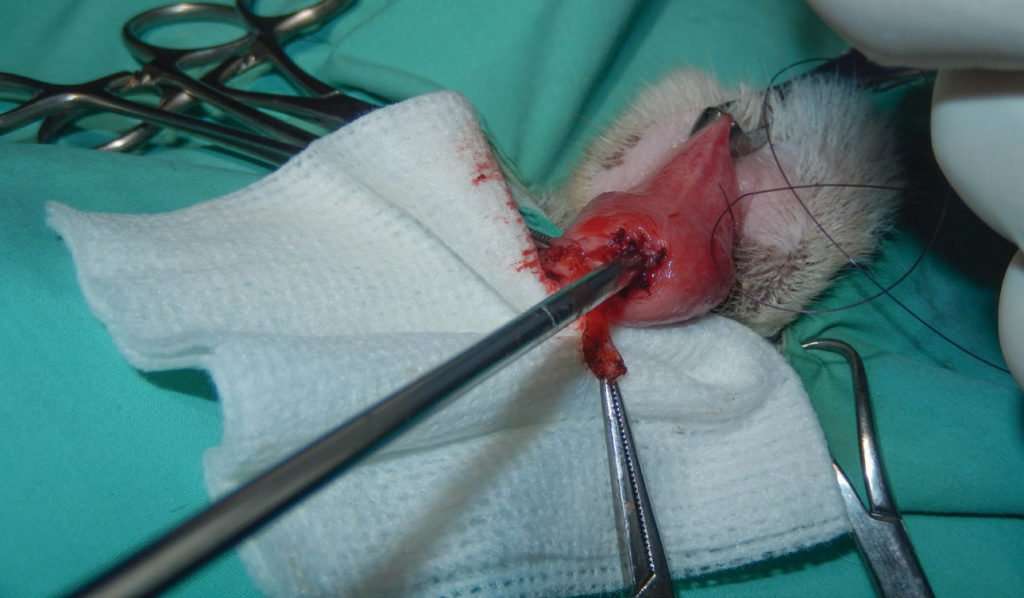 Figure 8: As the incision advanced, sutures were placed in an uninterrupted pattern. 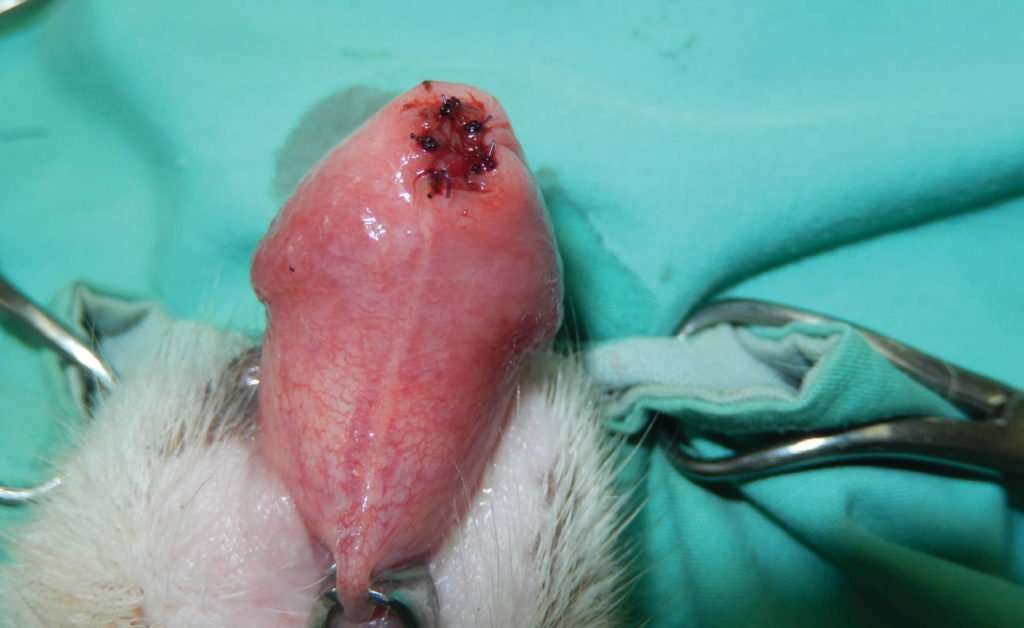 After the procedure, Olaf was sent home on carprofen (anti-inflammatory/analgesic) for one week. His activity was restricted during the first week. The patient had mild bleeding for the first three days, but it cleared rapidly. He had no complications and no tenesmus postoperatively. It should be noted that excitement and a partial erection may cause bleeding initially. It is therefore recommended that an effort e made to limit exciting activity for the first week after the procedure. A mild tranquilizer may be used if necessary. The patient should wear an Elizabethan collar or inflatable protective collar until suture removal. Sutures are removed 14 days after the surgery (light sedation may be used for this procedure).

In our clinic, the Aesculight CO2 laser is always utilized for the correction of urethral prolapse. Compared to scalpel surgery, the greatest benefit of using the laser for this procedure is the efficient hemostasis in this richly vascularized area. In addition, the lack of a tourniquet makes this surgery less traumatic to the penile tissue.

Will Schultz, DVM, graduated from Michigan State University in 1973 and opened his companion animal practice in the fall of 1974. Dr. Schultz has been a board member on the Synbiotics Reproductive Advisory Panel, the Society for Theriogenology and the Theriogenology Foundation. He has held speaking engagements at several veterinary conferences, veterinary associations and national specialties because of a special interest in canine reproduction and laser surgery. Schultz also is interested in soft tissue and orthopedic surgery. Schultz, who has more than 20 years of experience with laser surgery, uses a 40- watt flexible hollow waveguide CO2 laser.

It is now fair to say that various surgical lasers have extended the operative precision, range, and morbidity reduction in small animal surgery. Equine upper airway surgery has also been revolutionized, and there are certainly many applications yet to be developed.