By Janine S. Dismukes, DVM For The Education Center 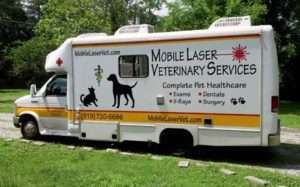 In 2004, I attended the Ralph Lee Veterinary Conference in Myrtle Beach, S.C., and heard Dr. John Godbold speak about surgical lasers. I immediately recognized that less bleeding, less swelling and less pain were higher standards to which I would hold my practice. That same conference, I registered for the hands-on surgical laser lab, and I was hooked!

At that time, I was an associate in a small animal practice. I returned from the conference insisting that the practice needed a surgical laser for our patients and to exemplify our state-of-the-art image.

The practice purchased a laser, and during the next few years, I attended all the surgical laser CE courses I could. Interesting enough, Aesculight is the only surgical laser company that provides and promotes surgical laser continuing education for veterinarians. 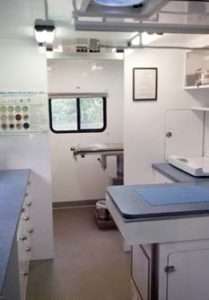 In 2008, I started a small animal mobile practice (Figures 1A-1B). All surgeries are done with the flexible waveguide Aesculight CO2 surgical laser (Figure 1C). My laser has the ability to work in the SuperPulse mode, which allows for sufficient tissue relaxation (cooling) between high-peak laser pulses to minimize the zone of thermal necrosis (Wilder-Smith and colleagues[1] report sub-50 micron zone of thermal necrosis achieved with a 0.25 mm laser spot-size tip used with the flexible waveguide CO2 laser).

The SuperPulse mode ensures char-free ablation, incision and excision. And it is easy to control the depth of coagulation/hemostasis on the margins of the cut. I use the laser almost every day that I am seeing patients. I perform all the usual surgeries of a small animal practice, such as spays, neuters, biopsies, mass removals, Meibomian gland removals and more. The laser’s precision, and its control of bleeding, swelling and pain, have removed my reluctance to do enucleations, amputations and aural hematomas. 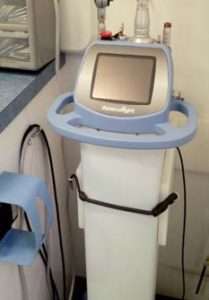 I would emphasize the usefulness of the CO2 laser for oncologic surgeries. The laser operates photo-thermally; in other words, it cuts, ablates and coagulates soft tissue in a non-contact mode (with a beam of light). This mode of laser-tissue interaction can minimize the intraoperative contamination of the wound with tumor cells.[2,3]

Another advantageous peculiarity of the CO2 laser surgery is that it causes no muscle contraction (compared to electrosurgery).[4] F.A. Mann points out in the April issue of VPN the importance of the hemostatic ability of the CO2, laser (i.e., due to the bloodless surgical area). Excisions can be more conservative than a conventional scalpel.[4]

The ability of the laser to achieve pain-free hemostasis is unmatched in any type of soft tissue surgery, especially in highly vascular parts of the animal, such as around the face, the ears and the genital area.

Since having the laser, I have successfully performed many surgeries that I would not have attempted with a scalpel—mass removal on a hemophiliac cat, many soft-palate resections and tonsillectomies for brachycephalic breeds, rhinectomy to remove SCC on white cats, ablation of feline stomatitis and removal of lick granulomas. I get referrals from other veterinarians in my area to perform laser procedures on their patients and even on my colleagues personal pets.

The following five clinical cases are examples of using the Aesculight CO2 laser in my mobile veterinary clinic.

An 8-year-old male neutered domestic short-haired cat presented for excision of a squamous cell carcinoma of the right pinna and nasal planum. 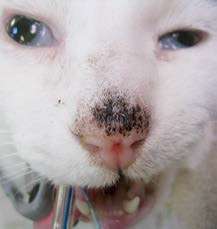 1A: Pre-operative view of the SCC of the nasal planum. 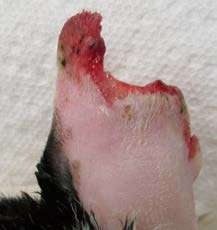 1B: SCC of the right pinna prepared for laser surgery. 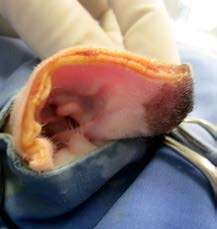 1C: Laser incision of the pinna prior to suturing. Laser was set to 20 watts continuous- wave SuperPulse and used with a 0.4 mm focal spot size. 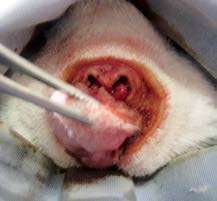 1D: The entire nasal planum was excised with the laser, taking generous margins. 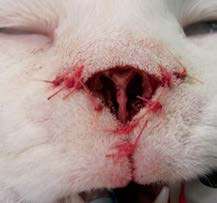 1E: Surrounding dermis was sutured with 4-0 braided suture to the exposed mucosa. 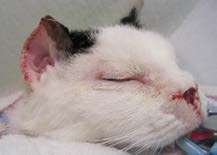 1F: Immediate post-operative view. The cat began eating comfortably with in 3 hours of waking from surgery. 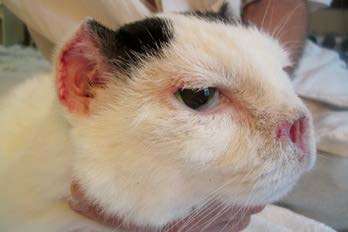 A 7-year-old female spayed Boston terrier presented for excision of a rectal polyp. The area presented a challenge due to its high vascularity and the risk of intra- and post-operative bleeding. 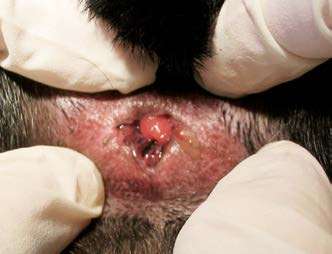 2A: Pre-operative view of a 5 mm rectal polyp. 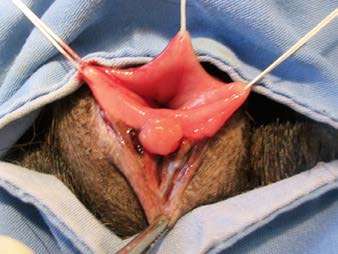 2B: The polyp was externalized and visualized with the help of three traction sutures put through the rectal mucosa. 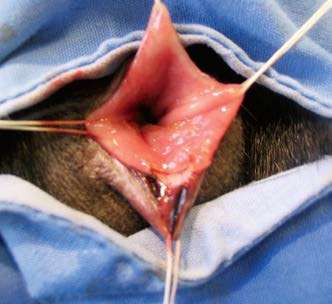 2C: The laser was used at 12 watts in Super- Pulse mode to excise the tumor. The spot size selected on the adjustable handpiece was 0.25 mm. Tension was applied to the polyp. The polyp was outlined with the laser and then undermined. Note the small bloodless excision area. 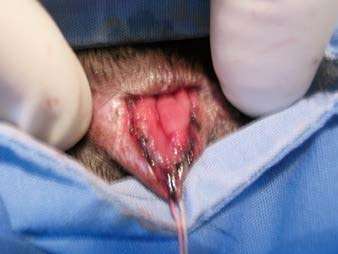 2D: Immediately post-op view of the surgical site. The wound was closed with simple interrupted monofilament sutures through mucosa and submucosa. The patient was placed on metronidazole and carprofen post-operatively. Healing progressed without complications. Rectal exam was normal at 10 days post-operative.

Aphrodite, an 11-year-old female spayed domestic short-haired cat, presented for a low-grade nerve sheath tumor. The condition was complicated by the patient’s hemophilia, which posed a serious risk of intra-operative hemorrhage. Due to its ability to create efficient hemostasis, the laser was chosen for the surgery. One unit of whole blood and one unit of plasma were on hand but not needed. 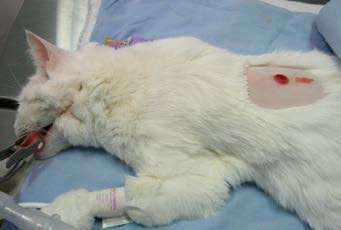 3A: A female hemophiliac cat presented for an excision of a 1-cm, low-grade nerve sheath tumor. 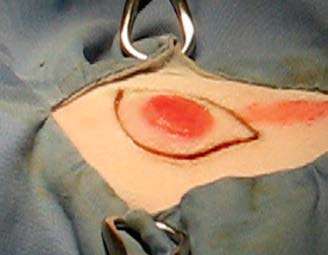 3B: The tumor was outlined with the laser with 3-4 mm safety margins. The laser was used at 15 watts in the continuous-wave mode. The tipless adjustable handpiece was set to 0.4 mm spot size. Note the bloodless surgical field. 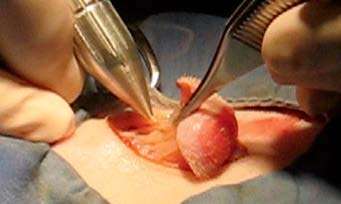 3C: Traction tension was applied to the tumor. The initial incision was deepened and the tumor was then undermined. The adjustable laser handpiece is shown. 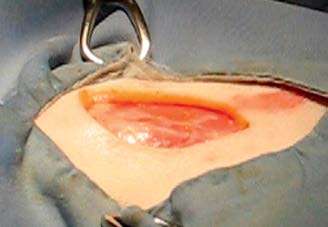 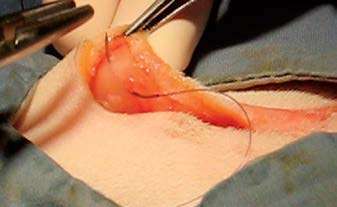 3E: The surgical wound was sutured with subcutaneous and subcuticular sutures, then sealed with skin glue. The surgical incision healed without complication in seven days. 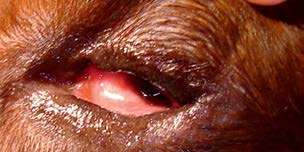 4A: Intermediate congenital entropion of the left lower eyelid. It was decided to surgically correct the entropion with the Aesculight CO2 laser.

4B: Intra-operative view. A narrow shallow crescent of skin was excised from the lower lid with a 0.25 mm spot size with the Aesculight laser set to 15 watts SuperPulse C3 Pulse Mode. Note complete lack of bleeding or distortional swelling. 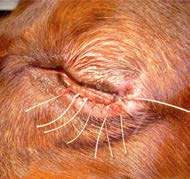 4C: Immediately post-operative. The wound was sutured. Note minimal swelling. During the same visit, neuter was performed along with the entropion correction. Both procedures took 45 minutes to complete. 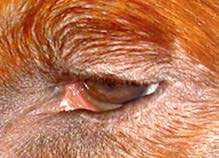 4D: One month after the surgery. Perfect healing without scarring.

A 5-year-old female spayed boxer presented for a surgical repair of an aural hematoma of the left pinna. 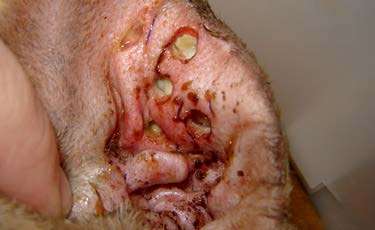 5A: Immediately 24-hour post-operative view. The laser was set at 8-10 watts continuous-wave mode. The 0.8 mm spot size was used. Multiple small 5-8 mm holes were created with the laser to allow for adequate drainage of the hematoma. The holes were created only on the inner surface of the pinna. Clotted blood and fibrin were removed through the holes. Stay sutures were placed through the skin and cartilage to eliminate dead space and ensure the adherence of auricular cartilage to skin. 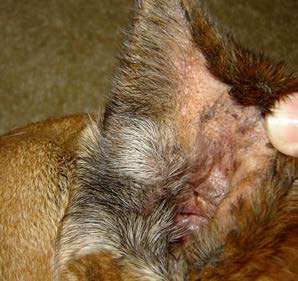 Janine Sagris Dismukes, DVM, graduated from North Carolina State University’s College of Veterinary Medicine in 1998. Upon her graduation, she was recognized with a Clinical Proficiency Award and an Excellence in Aesthesia Award.

Dr. Dismukes began her career as an associate at a small animal veterinary hospital in north Raleigh, NC. A few years later, she joined an excellent small animal practice in Cary, N.C. She became a member of the Veterinary Surgical Laser Society and attended numerous lectures and hands-on laboratories using CO2 and diode lasers beginning in 2004. In 2006, she was certified by the Veterinary Surgical Laser Society with the American Veterinary Medical Association. She has taught laser laboratories at state and national veterinary conferences, including NAVC in Orlando, WVC in Las Vegas and the AVMA Convention in Boston.

This Education Center article was underwritten by Aesculight of Woodinville Wash., the manufacturer of the only American-made CO2 laser.