By Anya Glazkova, Ph.D. For The Education Center

Lucké, a debilitated juvenile green sea turtle (Chelonia mydas) found stranded in Volusia County, Florida, was taken to the Georgia Sea Turtle Center on Jekyll Island. His body, including the right eye, was covered in multiple tumors (Figures 1A and 1B).

Blood tests showed severe anemia (packed cell volume of 9 percent) and low protein and albumin. A CT scan ruled out internal tumors, and a diagnosis of fibropapillomatosis was made. 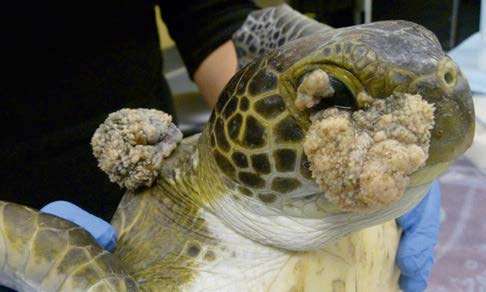 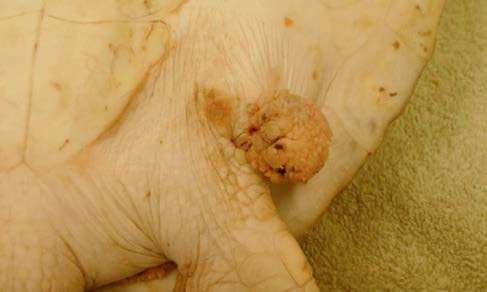 Figure 1B: FP tumors on left hind flipper and behind it, on shell.

FP tumors can compromise the turtle’s vision and normal functions such as eating, swimming, diving and predator evasion; they cause immune suppression.

Terry Norton, DVM, Dipl. ACZM, director of the Georgia Sea Turtle Center and the veterinarian who treated Lucké, says surgery should only be performed if the animal is stranded and the tumors appear compromising. The turtle should never be pulled from the wild just to remove the tumors. Turtles with FP are categorized as grade 1-3. Grade 3 carries a poor prognosis. In very severe cases such as turtles with internal FP or where both of their eyes are severely affected, it may be better to euthanize the reptile.

In this case from 2012, Dr. Norton decided to surgically remove Lucké’s tumors. Prior to the surgery, however, the sea turtle had to regain enough strength to be able to withstand anesthesia. His PCV had to reach 20 percent. Lucké spent one month in the rehabilitation center undergoing supportive care, which included iron supplementation, fluids, antibiotics and good nutrition.

After that, his surgery was performed utilizing the Georgia Sea Turtle Center’s state-of-the-art technology, the flexible fiber CO2 laser (Aesculight).

Historically, FP tumors have been removed with scalpels, electrocautery, cryosurgery and CO2 lasers.[5] However, today the laser has become the standard of surgical treatment of FP tumors in sea turtles.

Comparing his laser to other surgical modalities, Dr. Norton says that “CO2 laser surgery is much quicker than any other technique to remove the masses, [and] to control hemorrhage.” He points out that his Aesculight laser is very important for removing fibropapillomas from the skin and eye (eyelid, conjunctiva and cornea). He also uses it to ablate abscesses, assist in amputations and perform many other procedures.

During scalpel excisions, FP tumors, especially larger ones, can bleed extensively, which can be dangerous in debilitated patients. In addition, scalpel wounds require suturing. In the past, sliding skin grafts were attempted to cover larger skin defects, but the sutures often pulled out, leading to the dehiscence of grafts.[5]

In contrast, Norton says the CO2 laser provides excellent hemostasis during procedures, even with larger tumors (its wavelength allows for the coagulation of smaller blood vessels up to 0.5 mm in diameter), and the zone of thermal damage is minuscule at only 50 microns.[6]

Once the tumor is excised, the surgeon can defocus the laser energy and coagulate the surgical site, thereby reducing the wound size. No sutures are required and the wound heals by secondary intention.

Similar to its effect on blood vessels, the laser seals lymphatics and minimizes post-operative swelling. The laser cuts with a highly focused beam of light, and the non-contact cutting ensures that there is no wound contamination, thereby improving patient recovery.

When compared to scalpel incisions, CO2 laser-irradiated skin heals with less scarring. A number of studies attribute this reduced scar formation to the fact that, with laser surgery, only a small amount of myofibroblasts are found at the surgical site.[7,8,9] 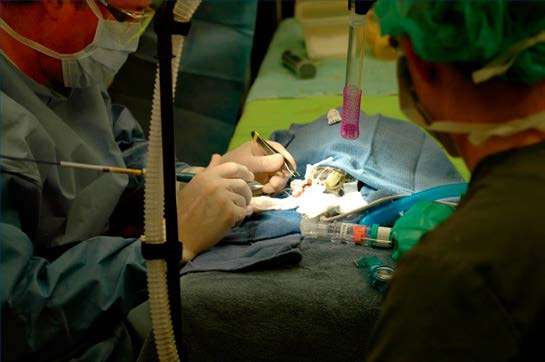 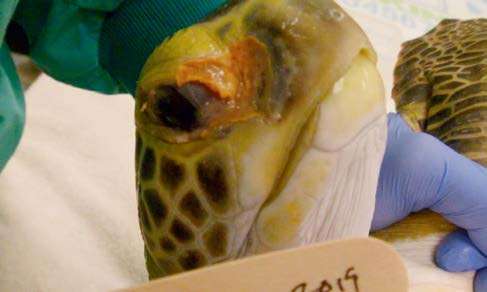 The patient was anesthetized and put on a ventilator. Surgery started with the challenging task of removing several tumors from Lucké’s right eye (Figure 2). The high precision of the CO2 laser was crucial for this delicate procedure. The tumors were narrower at the base—they were attached to the cornea by a fibrous pedicle.

Traction tension was applied to each mass and the laser beam was directed perpendicular to the pedicle (parallel to the cornea) and used to undermine the masses, gradually “peeling” them off the globe with no collateral damage to the healthy tissue.[5]

Dr. Norton emphasizes the importance of preserving the turtle’s vision and using lots of ophthalmic ointment and saline-moistened gauze to protect its eyes. On the other hand, if the cornea is effaced or the tumor invades the globe beyond the cornea, the eye must be enucleated.[5]

After Lucké’s eye tumors were excised, the remaining masses were removed from his neck, flippers and plastron. Veterinary surgeons must use high laser power settings, or else the papillomas will recur (Dr. Norton, for example, uses 14-16 watts in the continuous wave mode for incisions). No sutures were required.

The patient recovered well. He was put on analgesics and antibiotics, and was closely monitored and kept out of his water tank for 24 hours. Afterward, he was returned to his tank. Healing progressed without complications. Figure 3 shows Lucké 10 days post-operatively. Figures 4A-4C show him at four weeks after the surgery. Figures 5A-5C show the patient’s healing at his six-week follow-up examination, soon after which he was released back into the wild. 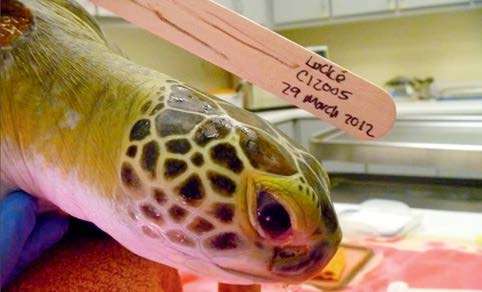 Figure 4A: Four weeks postop view (sites where tumors depicted in 1A used to be). 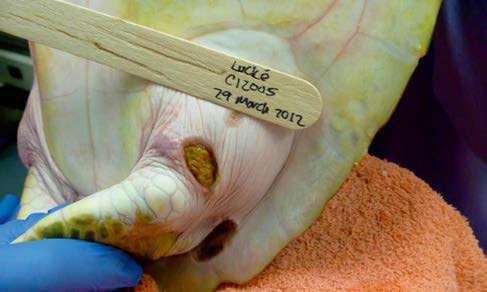 Figure 4B: Healing at four weeks postop (sites of tumors depicted in figure 1B). 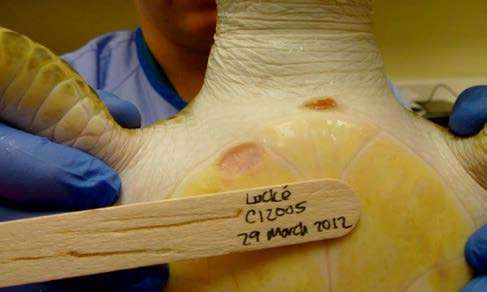 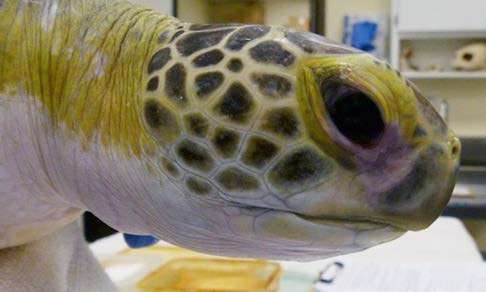 Figure 5A: Six weeks postop. Beautiful healing of the cornea and periocular area. 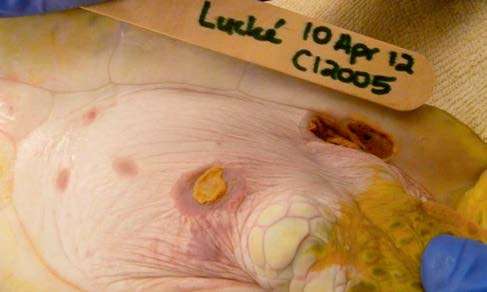 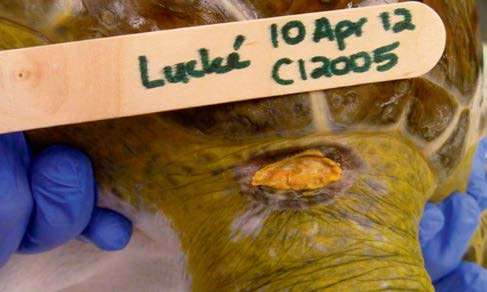 Figure 5C: Six weeks post-op view, healing of the largest surgical site on the back of the neck.

Such success stories are becoming common thanks to organizations like The Georgia Sea Turtle Center, Mote Marine Laboratory, Gumbo Limbo Nature Center, and The Turtle Hospital, among others, all of which have flexible fiber CO2 lasers. By using this technology, surgeons are able to achieve hemostasis, mostly secondary intention healing, diminished swelling, reduced risk of infection, minimized scarring and improved the recovery of their patients.

Terry Norton, DVM, Dipl. ACZM, is the founder and director of the Georgia Sea Turtle Center on Jekyll Island, Ga. He provides veterinary care for the Georgia Sea Turtle Center, the Turtle Survival Alliance’s Turtle Survival Center and St. Catherine’s Island Foundation programs. He has published numerous articles for referred journals and book chapters. He is an adjunct professor at the University of Georgia, University of Florida, North Carolina State University and Tufts University Cummings School of Veterinary Medicine. Dr. Norton is the Vice President of the St. Kitts Sea Turtle Monitoring Network. He was the Chair of the Conservation Planning Committee for Jekyll Island.

Surgical laser is a good addition to our busy practice. The best of all is your local representative, who is a great help to learn the proper use of laser. This has provided us a good opportunity to learn quick and use the equipment every day.