By William E. Schultz, DVM For The Education Center
Originally Published In Veterinary Practice News, January 2019 – Download as a PDF 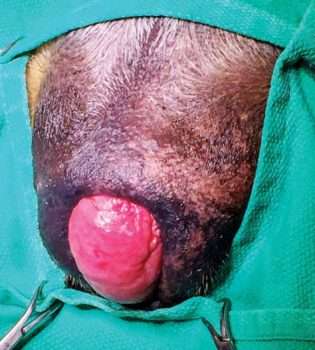 Figure 1: The site is draped for surgery.

During the estrogen phase of heat cycles, bitches exhibit an increased thickening of vaginal tissue for protection during breeding. In some cases, the thickening of the vaginal floor in the ventral aspect of the vagina just cranial to the vaginal vestibule continues to thicken, and the hyperplastic tissue may eventually prolapse (Figure 1).

The prolapsed vaginal tissue may create a mechanical barrier to breeding—the mass may desiccate and/or ulcerate due to the protrusion and may become infected; the prolapsed tissue may act as a dam, causing obstruction to vaginal flow that may lead to cranial vaginal fluid retention. Ovariohysterectomy is usually curative within a brief period if the hyperplastic tissue is not severely damaged. A Caslick suture pattern may be used in early stages, but this will not prevent the return of the prolapse in future heat cycles. The recurrence rate is high, and if the bitch is important for breeding, the hyperplastic tissue may be removed and normal function returned.

Surgical removal is possible with very good results. However, in order to completely remove the prolapsed mass, it is important to perform the procedure during the heat cycle. With the vaginal tissues thickened, blood flow is increased and hemostasis may be difficult. We use our flexible hollow waveguide CO2 laser for this procedure. Electrosurgery is possible, but thermal tissue damage is dramatically greater than when the procedure is performed with a CO2 laser.

Belle, a two-year, nine-month-old Cane Corso, had a history of a prolapsed vaginal hyperplasia at her last cycle and it repeated at the current cycle. It was decided to remove the prolapsed hyperplastic tissue with the laser.

The patient was positioned in sternal recumbency with a pad under the pelvis and the tail elevated. A surgical table that tips up at one end is beneficial for such cases. 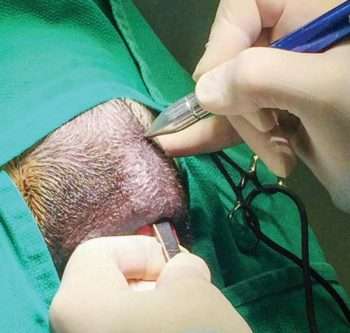 Figure 2: A scalpel handle is used to apply tension to the episiotomy incision. 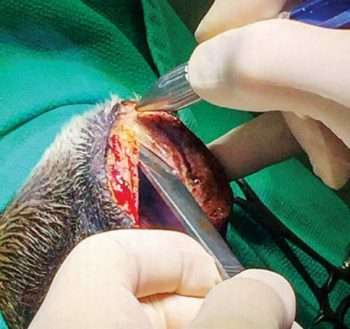 Figure 3: The incision is enlarged until the cranial base of the prolapsed tissue is accessible. 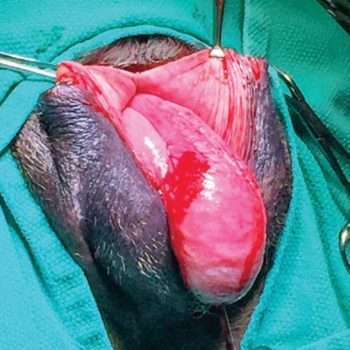 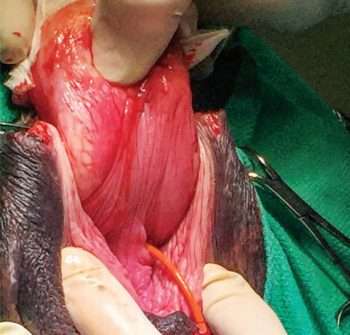 Figure 5: The urethral catheter is easily inserted after the episiotomy, with the prolapsed tissue elevated. 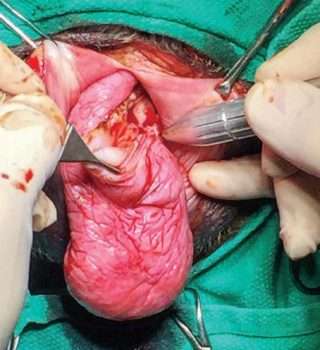 Figure 6: The incision is continued laterally to the extent of the hyperplastic tissue. The margins are easily identifiable. 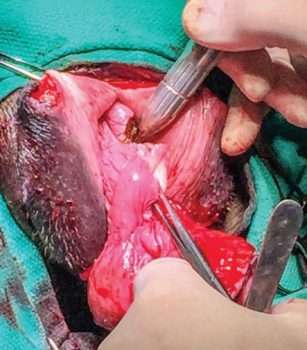 Figure 7: Tension on the prolapsed tissue allows for more rapid cutting with the laser. 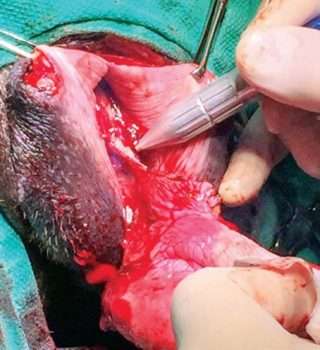 Figure 8: The incision is continued, paying attention caudally to the urethra and not cutting deeply in the area of the urethra. 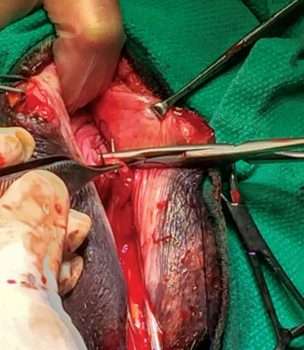 Figure 9: The incision is closed transversely starting in the center, with identification of the urethra distally.

An episiotomy using 15-20 watts CW SuperPulse began at the dorsal aspect of the vulva and was continued dorsally to allow full exposure of the hyperplastic tissue (Figure 2, 3, and 4). Tension was applied to the incision margins for exposure. The hyperplastic tissue was elevated and a urinary catheter was placed (Figure 5). In some cases, the catheter may be placed before the episiotomy, but visibility for catheter insertion is significantly improved after the episiotomy incision.

The laser was then set at 15 watts CW SuperPulse for the dissection of the hyperplastic tissue. The margins were easily identifiable and care was taken during ventral dissection to avoid the urethra. The incision was continued around the hyperplastic tissue until the removal was complete (Figure 6, 7, and 8). The incision was closed transversely with good maintenance of vaginal diameter (Figure 9).

Closure of the episiotomy was performed in two layers. The first layer closed the vaginal mucosa, while the second one closed the fascial and subcutaneous tissues (Figure 10 and 11). Submucosal tissue was closed using 0 monofilament-absorbable sutures. Care was taken to avoid the pelvic urethra during closure. The mucosa was then closed with interrupted sutures of the same material (Figure 10). The urethral catheter was checked during closure to ensure no sutures were placed around or near the urethra. Since the subcuticular layer closure was acceptable, no skin sutures were placed (Figure 12 and 13). Care was taken to have the dorsal commissure of the vulva properly aligned during closure. 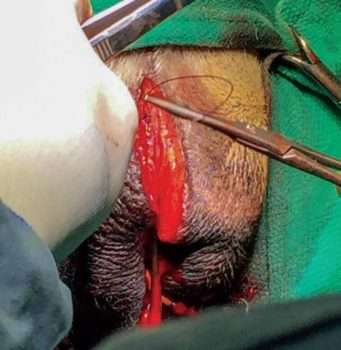 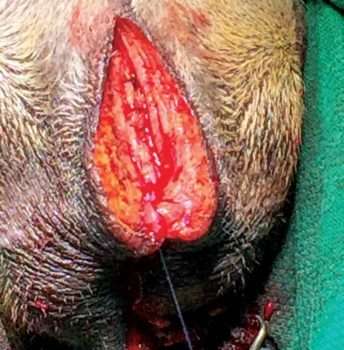 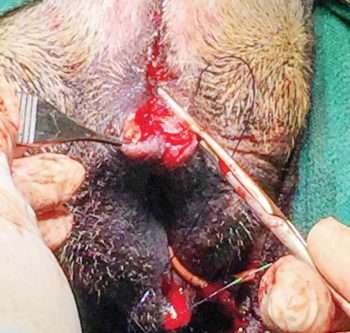 Figure 12: The subcuticular layer is nearing closure. It is important to be sure the labial margins meet centrally. 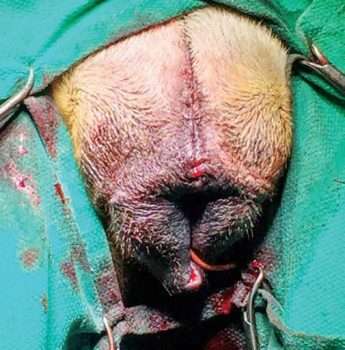 Figure 13: No skin sutures are needed when the subcuticular layer closes properly.

The patient was comfortable immediately after the laser surgery. If scooting occurs, diapers or underwear may be used to protect the incision. An Elizabethan collar may be necessary if licking is a concern.

NOTE: This article has been expanded upon by the author from his chapter reprinted with permission from Laser Surgery in Veterinary Medicine, edited by Christopher J. Winkler, published by John Wiley and Sons.

William E. Schultz, DVM, graduated from Michigan State University College of Veterinary Medicine in 1973 and opened his companion animal practice in the fall of 1974. The practice includes general medicine with special interest in reproduction and orthopedic surgery. Fresh, chilled and frozen semen breedings with semen collection, storage, and shipment are also available. Digital radiology includes OFA (Orthopedic Foundation for Animals) and PennHip procedures. Dr. Schultz has been a board member on the Synbiotics Reproductive Advisory Panel, MOFA Advisory Panel, the Society for Theriogenology, and the Theriogenology Foundation. He has a special interest in canine reproduction and laser surgery and has had speaking engagements at veterinary conferences, veterinary associations, and national specialties. In addition, he was awarded the Veterinary Practice of Excellence award by the Society for Theriogenology in 2014. Dr. Schultz has also published articles related to canine reproduction and soft tissue laser surgery, including a chapter on perineal and urogenital laser surgery in a new textbook.