Editor’s note: This interview with Don Noah, DVM, was conducted in February 2012.

If you practice in North or South Carolina, chances are you’ve spoken to Dr. Noah, an experienced veterinarian and helpful laser surgery consultant. With over 45 years of experience in veterinary medicine, including 15 as a laser sales representative, Dr. Noah offers his insight and expertise in this interview.

We begin with his personal story. Don Noah grew up on a dairy farm in Cleveland, Ohio.

“Born and raised on a dairy farm, I grew up with a lot of different animals,” he recounts. “I had to work mornings and evenings!”

He did so until his senior year of high school, when he was offered a full scholarship to attend Ohio State University.

“After graduating from veterinary school,” Dr. Noah recalls, “I saw that all of my friends were called to Vietnam … and even though my number was in the draft, I never got a call!”

In turn, Dr. Noah volunteered himself and joined the Ohio Air Guard. He served in Korea as well as Vietnam (shortly after North Korean forces stole the USS Pueblo). In fact, Don Noah served 27½ years in the Air Force concurrently with his career as a veterinarian.

“Instead of sitting idly on the weekends, I decided to serve my country,” he explains.

Dr. Noah owned a veterinary practice for 28 years. His first exposure to laser surgery arrived by chance, when his friend and colleague asked him to attend an AVMA meeting on his behalf.

“He asked me to gather information about different lasers, wavelengths, prices, etc.,” Dr. Noah says. “At that time, around 1996, I didn’t know anything about lasers, so it was quite the learning experience.”

There he also attended a CO2 laser wet lab in order to learn firsthand.

“It was an eye-opening experience!” he exclaims. As a result of that conference, not only did Dr. Noah incorporate CO2 laser surgery into his own practice, he also sold a laser to his friend. In time, Dr. Noah would serve as a DVM surgical laser consultant.

I then asked Dr. Noah how his knowledge and firsthand experience in the veterinary field contribute to his work as a laser consultant.

“What I always say to veterinarians is, ‘Although I always enjoyed surgery, it wasn’t what I looked forward to the most,'” he begins. “What I looked forward to was the accomplishment of getting patients better. But in the process of doing that, I did a lot of surgeries. “With the CO2 laser, I saw how much easier surgeries became. I didn’t change the type of surgeries I did. I did the same surgeries, didn’t specialize in anything in particular, but I did many more surgeries with the laser; my patients responded better and I had a greater sense of accomplishment.”

He also cites clients’ responses to their pets’ expressions as another important and gratifying accomplishment: “Their [pets’] ability to walk smooth, to not be tight or limping. Their expression is … they’re comfortable.”

Dr. Noah also calls the Aesculight surgical laser “a superior adjunct to the hospital technology base.”

He explains: “This laser says good things about your office and staff … by getting effective and comfortable results from surgery. It allows the general veterinarian to maximize surgical capability yet does not jeopardize his ability to use surgical referrals. It allows him to do more of what is in the general surgery realm without being competitive to specialists.”

“And how does having a top surgical laser differentiate you from the competition?” I next ask Dr. Noah. “Having the best surgical laser technology indicates your office’s veterinary medical leadership by improving the well-being in patients,” he says. “For example, I have a hard time imagining soft palate resections, entropion or perianal adenomas without lasers. … It’s a dramatic difference. Lasers are also great for utilizing on multiple papillomas, making the animal look and feel so much better. It’s … leading people from where they are into something better.”

From an experienced practitioner’s standpoint, Dr. Noah says his new laser is remarkably easy to use and, like the flexible-waveguide Luxar, allows for superb visualization of the surgical field.

“Without the red stuff,” he jokes. “It’s simple. Just a different modality of cutting, not a change in surgery. It requires a very short learning curve.

“It’s enjoyable to have dynamic lecturers such as Dr. Godbold and Dr. Gores. Labs, they’re just a joy to attend. They allow the imagination to flow. They’re not so structured that there’s only one way to do something; rather, there are several different approaches, and your limit is your imagination. This is one of the things I always stress when I’m in the wet labs. If you have an idea of what you’d like to do, the laser will take you there. All you have to do is loosen your imagination and let it go.”

Dr. Noah recalls how he felt when he attended his first seminar about 15 years ago. 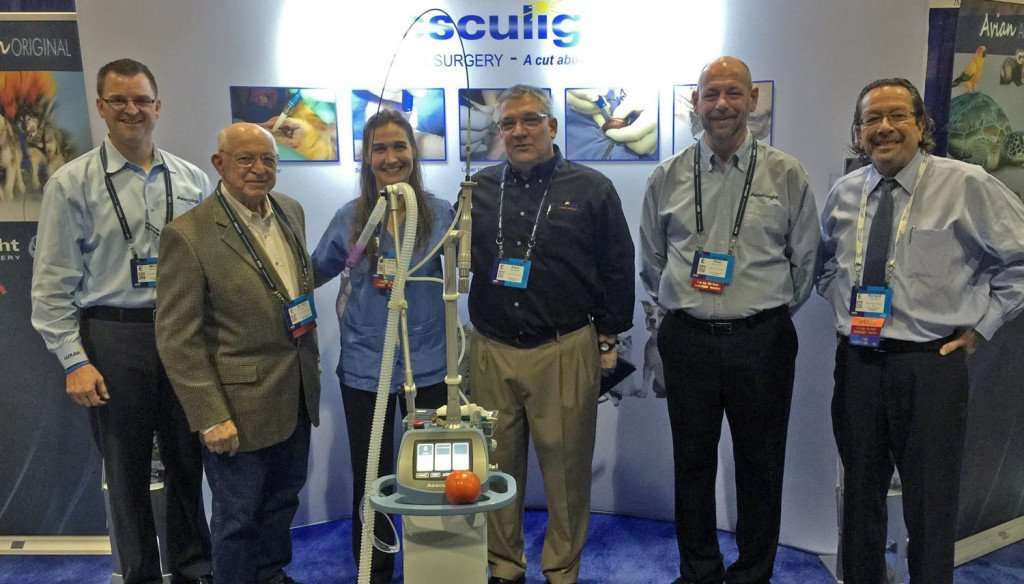 “It’s rewarding to see the light come on. You just see it on the expressions of the students—’Ah, that’s how that happens.'” At the labs, Dr. Noah says, many laser surgeons can fine-tune their technique by better understanding power supply, hand speed, tip-to-tissue distance and interchangeable tip diameters.

“The tipless hand piece is an innovative addition,” he adds, “a great advantage of use in tip cost reduction.”

As a business owner for almost 30 years, Dr. Noah says the flexible-waveguide CO2 surgical laser is “the most valuable piece of surgical equipment in terms of both gross and net income.”

On the topic of return on investment, Dr. Noah asserts that the laser pays for itself with use. He also says the laser may be used to assist payment for ultrasound, chemistry, digital radiography, endoscopy, software and other useful practice technology.

“If there’s one thing that’s changing and needs to change even more, it’s how we as veterinarians place value on our services. It’s easier with laser surgery, because irrespective of fees, clients will generally opt for laser surgery over conventional surgery.”

“If you know it’s the best, why offer less?” he asks. “Your clients will thank you. As a veterinarian, if you think it’s the best way to do surgery, don’t offer the other one. Clients will follow you. They know that you have credibility, they know you’re working for them … they will take you at your word.

“And in time,” Dr. Noah adds, “your number of clients will climb as through word-of-mouth explanations. I’ve seen it happen time and time again.”

We conclude this interview the same way we began, with Dr. Noah’s personal story. Much like he speaks about lasers and veterinary medical leadership, Dr. Noah is a leader in his own family life. He serves as a role model for his sons. All three sons followed in their father’s footsteps and joined the Air Force. (The youngest one is retired.) His oldest son, also a veterinarian, is the vice commander of the U.S. Air Force School of Aviation Medicine.

“That’s where they send physicians to get their two-year residency in aerospace medicine,” the doctor explains.

Dr. Noah also has five grandchildren—two boys in the Ohio Air Guard and attending OSU, one in high school, and two granddaughters in grade school. He currently lives in Charlotte, N.C.

“Is there anything else you’d like to add, Dr. Noah?” I ask the doctor.

He concludes with the following: “I’ve seen many changes in veterinary medicine, but the one that excites me the most is laser surgery. Owners of lasers are adamant; they see their patients respond like never before; they are satisfying their clients as surgery requirements continue to rise.”

We perform every surgery procedure with the laser. This week I had 3 cases of BOAS syndrome and 2 of TPLO. I think the Aesculight laser is the best equipment we have bought so far.

We use the laser almost every day, and the first month billed out $700.00 in laser-use fees running from $35.00 for minor procedures to $150.00 for more complicated ones. Averaging $50-$75. Not one complaint about laser fees. In fact, quite the opposite, clients...