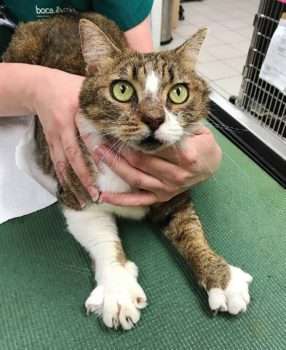 By Boaz Man, DVM For The Education Center
Originally Published In Veterinary Practice News, August 2017 – Download as a PDF

Moo, a neutered 6-year-old domestic shorthair male cat (Figure 1), presented to Boca Midtowne Animal Hospital for a second opinion on two large, erythematous, infected dermal masses attached to the plantar aspect of two separate digital pads of his left pelvic limb (Figures 2-A, 2-B). The previous veterinarian had recommended amputation of the digits due to the rapid growth of these masses and concern for inadequate surgical margins.

Histopathology of the masses confirmed the diagnosis of plasma cell pododermatitis, chronic active, diffuse and severe with ulceration and granulation tissue (Figure 3). This disease is seen uncommonly in cats and rarely in dogs. Lesions may be confined to a single pad or may involve multiple pads or feet. In some cases, increased vascular fragility may result in secondary hemorrhage. Chronic involvement of a single pad may respond best to surgical removal. The cause of plasmacytic pododermatitis is not known; presumably the lesions result from persistent antigenic stimulation, as seen in chronic plasmacytic inflammation of mucous membranes. A few cats have coexistent plasma cell stomatitis, immune-mediated glomerulonephritis or renal amyloidosis.

Upon physical examination, an indolent rodent ulcer was found on the upper lip (Figure 4). This patient previously had been treated for suspected eosinophilic granuloma complex with corticosteroids and antibiotics; he had only a partial response to treatment. Auscultation of this patient revealed a grade 3 sternal heart murmur. 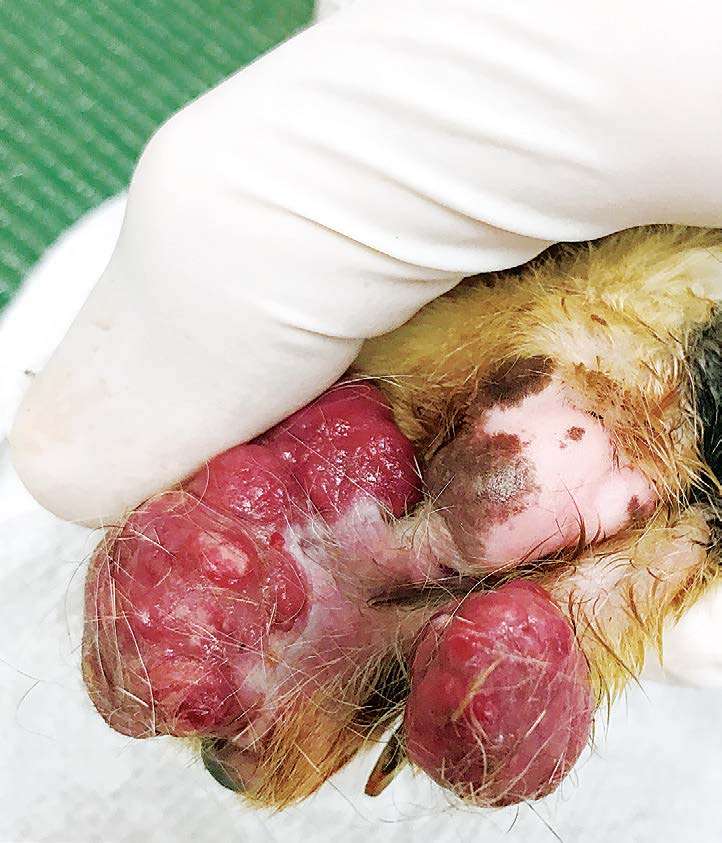 Figure 3: Biopsy/Histopathology. The dermis is diffusely, markedly infiltrated by numerous plasma cells, and many areas admixed with numerous lymphocytes, eosinophils, neutrophils and macrophages. There is extensive fibrosis, edema and ulceration of the pawpad and epidermis. Some areas contain abundant granulation tissue. Blood vessels are dilated and congested. Preoperative tests included a complete blood count, a complete chemistry profile, a cardiopet BNP blood test, a thyroid blood test, a feline leukemia virus/feline immunodeficiency virus snap test, a urinalysis, full body digital radiographs and a radiology consult, an electrocardiogram and an echocardiogram. All preoperative tests were acceptable for anesthesia. Protocol for this patient included a premedication with intramuscular butorphanol, induction with propofol and anesthetic maintenance with isoflurane gas via an endotracheal tube. Medications given intraoperatively included injectable Convenia and Metacam, and postoperative sublingual buprenorphine.

CO2 laser surgery was discussed as the best treatment option for this patient with this client; unfortunately, there were significant financial constraints that precluded the needed preanesthetic tests as well as a surgical treatment plan for this patient. Due to the unusually large appearance of these dermal masses, the suspicion that they were related to plasma cell pododermatitis, and likelihood of a successful laser surgery, I elected to volunteer my time and efforts to help this patient. Laser surgery was performed with our Aesculight flexible fiber CO2 laser (model AE- 2010) with the adjustable tipless laser handpiece and hemostatic forceps. The laser was set to 9 watts with a continuous wave setting. Two dermal growths were removed via laser excision (Figures 5, 6, 7). Simple interrupted 3-0 absorbable biosyn sutures were placed in the subcutaneous layer. The skin was closed using 3-0 nylon sutures in a simple interrupted pattern. (Figures 8, 9). The patient was bandaged postoperatively and remained in our clinic for 30 days to ensure proper healing and postoperative care. Bandage changes were performed every 72 hours. 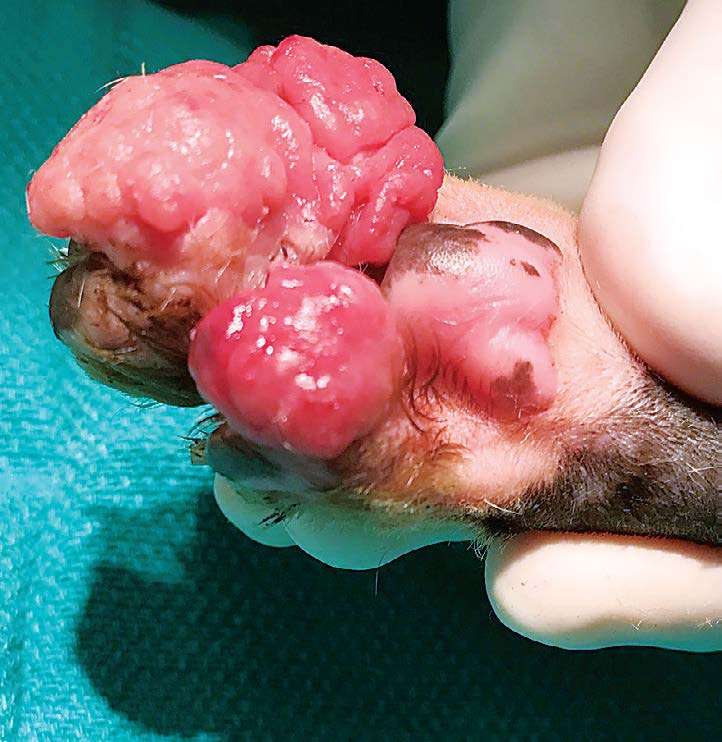 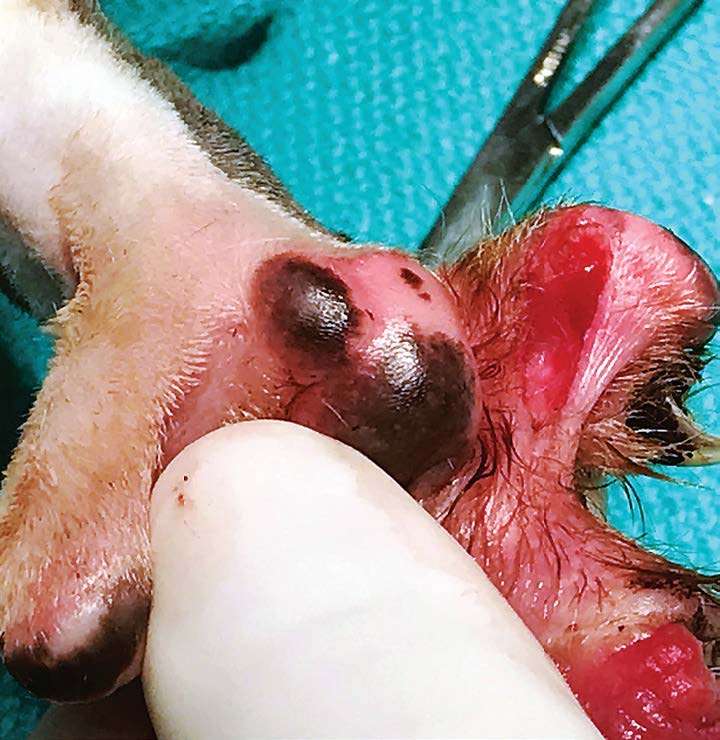 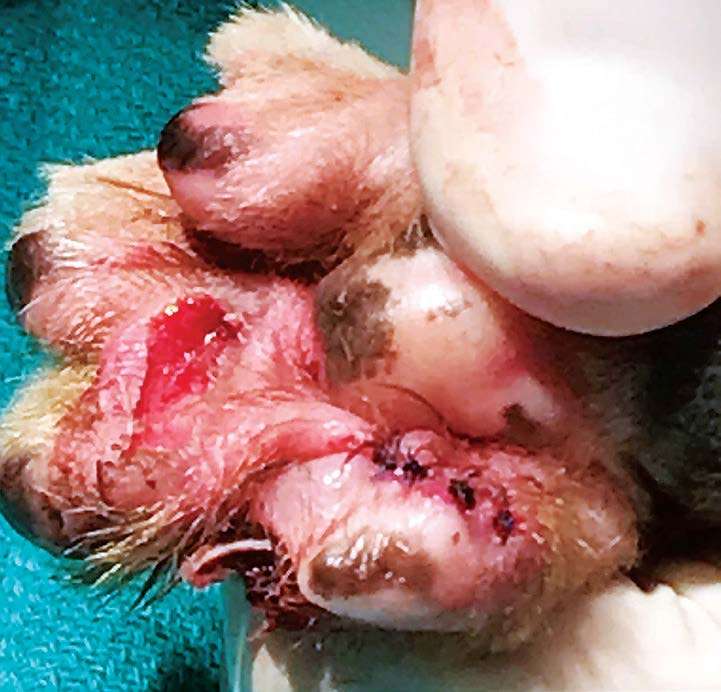 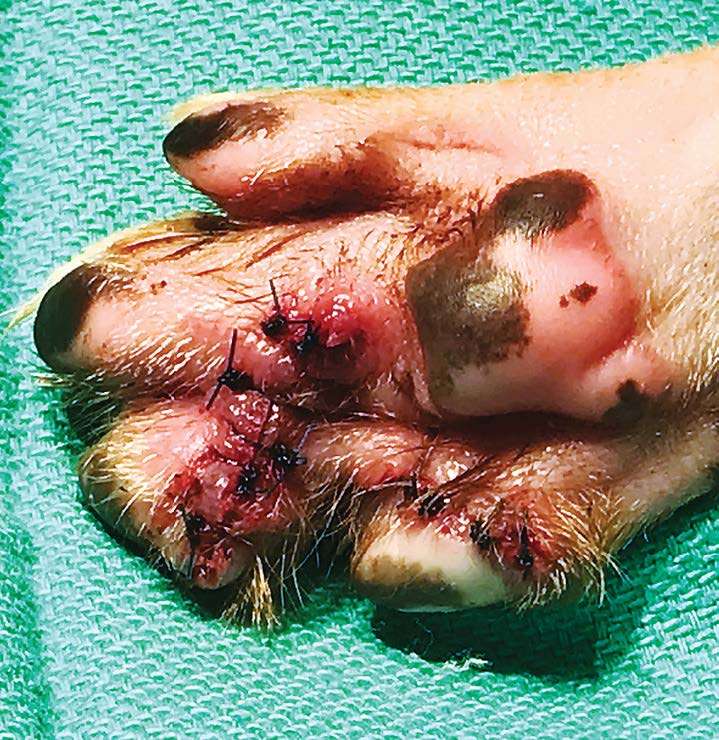 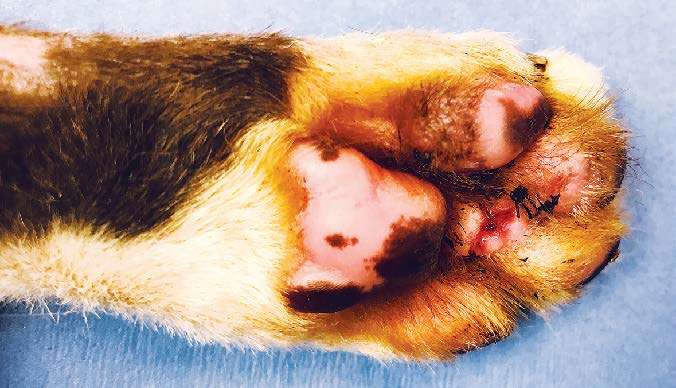 The primary benefit of the laser procedure includes a virtual elimination of bleeding, which allows for full visualization of the large masses, obtaining wide and appropriate surgical margins and providing a cosmetically pleasing, limb sparing procedure. In these cases, surgical time is reduced, which provides for a smoother anesthetic period and quick patient recovery. Histopathology was consistent with a severe case of plasma cell pododermatitis, and the patient recovered remarkably well in our hospital. In summary, this patient, who presented with painful, infected lesions that were deemed “inoperable,” had a successful operation. Postoperatively, the surgical site had no evidence of swelling or bleeding, and this patient was active and energetic within a short period.

Dr. Boaz Man is the medical director and owner of Boca Midtowne Animal Hospital in Boca Raton, Fla. Dr. Man, a South Florida native, has been passionate about caring for pets needs since childhood. He graduated from Saint Andrews High School in Boca Raton in 1995 and completed a bachelor’s degree in biology with a double minor in chemistry and Judaic studies from the University of Miami in 1999. He received his doctorate of veterinary medicine from Ross University in 2004 after completing his clinical training at Oklahoma State University. He believes in providing the highest quality of care to his patients and those who love them, and has special interests in dermatology, internal medicine and surgery. He takes great pride in his commitment to practicing cutting-edge medicine and diagnostics, and believes staying up to date with technology is one of the many essential keys to practicing good medicine.