By Ray Arza, DVM For The Education Center

Early detection and surgical correction of this and other components of the brachycephalic airway syndrome are recommended to prevent the progression of airway pathology. Many surgical techniques have been described in the literature. The purpose of this article is to describe the many benefits of this surgical procedure performed with a flexible hollow waveguide CO2 laser.

Other components of brachycephalic syndrome, such as stenotic nares, everted laryngeal saccules and laryngeal collapse, should be addressed by the veterinarian but will not be discussed here.

Symptoms of elongated soft palate (SP) include difficult breathing, snorting, snoring, stridor, gurgling and gagging. With increased severity, exercise intolerance and collapse may be seen. Some owners of brachycephalic breeds may perceive these symptoms as normal and do not seek veterinary involvement until later in life, and by this time surgical intervention will not be as rewarding due to development of secondary problems.

It is my opinion that veterinarians should discuss this problem with clients early in the animal’s life and recommend surgical intervention.

Because of the many potential complications that are common during and after surgical correction, many veterinarians are hesitant to deal with this condition. In my experience over the past 15 years and after performing over 350 soft palate resections with a CO2 surgical laser, these complications are greatly minimized and the benefits of early detection and surgical corrections are incredibly rewarding both to the patient and the client. 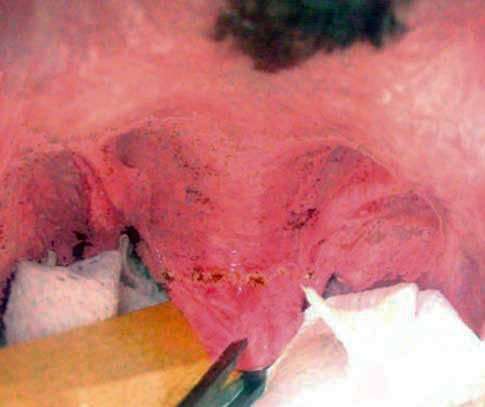 Figure 2A: Before elongated soft palate resection. Part to be excised marked with laser. Provided by Ray Arza, DVM. 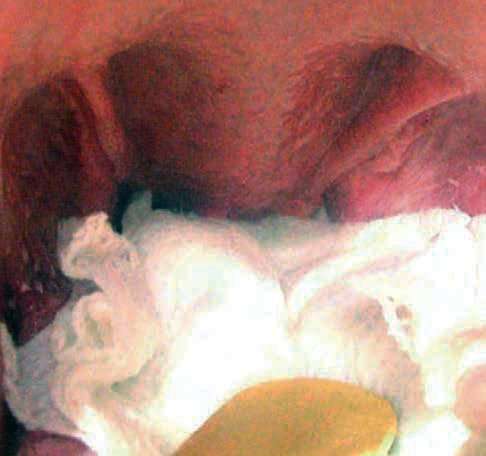 IV catheter is inserted to facilitate fluids, if necessary, and administration of pre-anesthetic and induction agents (propofol is my preference). Patient is then intubated. Patient is positioned in sternal recumbency with maxilla suspended by rolled gauze or tape placed behind canine teeth (Figure 1).

The next step is vital to determination of amount of tissue to be excised. Many techniques have been described in the literature to determine the amount of SP to be excised. After evaluating hundreds of “normal” throats during intubation of patients, I consider any overlap of soft palate and tip of epiglottis beyond 2 to 3 mm to be elongated.

I prefer marking the SP by its functional relationship to the epiglottis, and with the laser this is very easily accomplished with a high degree of certainty that the proper amount of tissue is always removed (not too little or too much).

With patient in deep plane of anesthesia, remove the endotracheal tube momentarily to mark the soft palate using the surgical laser in Pulsed Mode setting, i.e., P-6 or P-7* (Figure 2). This is accomplished by placing the elongated part of the SP over the epiglottis and then tracing a dotted line onto the SP along the entire border (not just the tip) of the epiglottis.

(Note: If patient is not in a deep plane of anesthesia for this part, movement of soft palate and epiglottis will make it difficult to accomplish.) Once the SP has been marked with the dotted line, the patient is then re-intubated and the surgeon can proceed with surgical resection with confidence that proper amount of tissue has been removed.

Endotracheal tube (ET) is tied down to the mandible (see Figure 1) and saline soaked gauze 4x4s are used to cover everything ventral to SP including all of the ET. This will prevent inadvertent lasing of the ET tube (Figure 3). At this point surgical procedure will take one to two minutes.

A skin hook is used to retract the pendulous part of SP and then it is secured with an Allis tissue forceps; a ligature may also be used here but forceps allow better control of tissue to be excised. 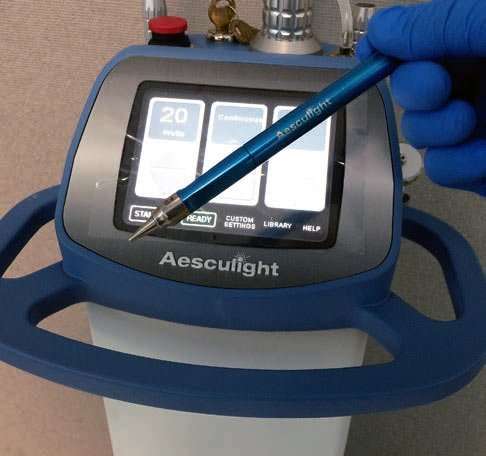 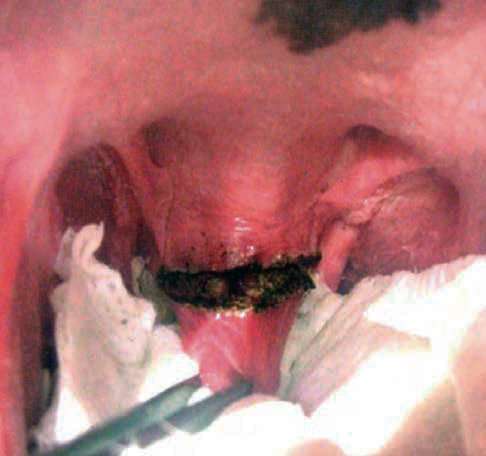 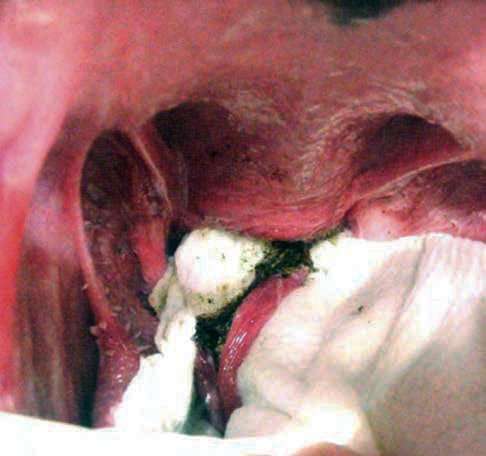 Laser is set to 15 to 20 watts in Continuous Wave with a 0.4 mm Tipless Handpiece and an initial partial incision is made all the way across the SP along the dotted lines previously described (Figures 4 and 5).

With partial incision made, I then retract the tissue more toward me to allow me to start my final incision at right edge of cut and work my way to the left side of the SP (Figure 6). Surgical procedure is complete (Figure 7) and cut surface is evaluated for any hemorrhage.

If hemorrhage does occur, I find that it typically will be coming from one or both of the branches of the palatine arteries. By retracting the cut surface with skin hook, it is usually very simple to isolate the one or two bleeders present and ligate. Since the laser seals all of the smaller blood vessels, this will usually take care of any hemorrhage post surgery. 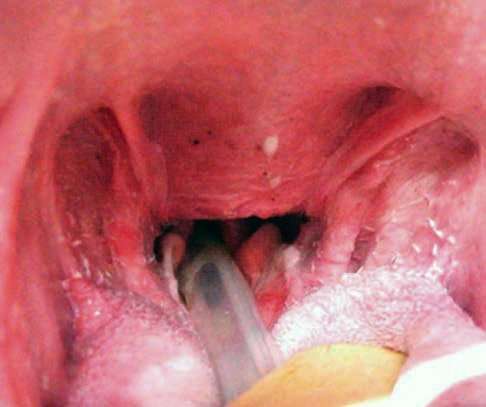 Figure 2B: Immediately after surgery. Provided by Ray Arza, DVM. 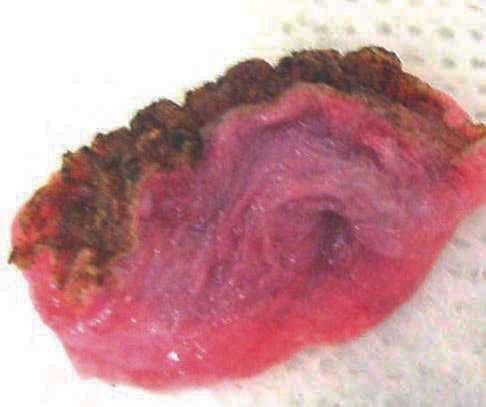 Advantages of using the Flexible Hollow Waveguide CO2 surgical laser in resection of elongated soft palate have allowed me to perform over 350 soft palate resections with very little morbidity.

When weighing the risks vs. rewards of doing this procedure over my first 19 years of practice (without having a CO2 laser), I chose not to do this surgery. After getting a surgical laser and understanding the benefits of this wonderful technology in decreasing pain, decreasing inflammation and greatly reducing hemorrhage, I found that the rewards of using the laser to correct stenotic nares, elongated soft palate and in some cases everted saccules and grossly enlarged tonsils far outweighed the risks commonly seen when performing these surgeries with conventional methods of scalpel, scissors or electrosurgical units.

Most of the dogs on which I have done these surgical procedures have gone home the day of surgery with absolutely no post-operative complication. 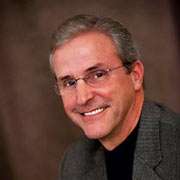 Ray Arza earned his DVM at the University of Tennessee in 1979. He was a small animal general practitioner for 23 years with a special interest in surgery and dentistry. Dr. Arza started using a surgical laser in 1998, and soon became a popular lecturer at conferences, universities and seminars on laser technologies. In 2002, he left private practice to join industry as an educator, trainer, consultant and lecturer. He acquired laser therapy expertise in 2005, and among other positions, has served LiteCure LLC as its veterinary medical director. He is the co-author of both volumes of “Class IV Laser Therapy Treatment of Common Conditions” and a contributor to the veterinary protocols programmed in LiteCure’s veterinary lasers.

We see dramatically less pain with laser patients versus the blade, especially in small dogs.

I love my Aesculight. I do think it makes a big difference in recovery and postoperative care.