CO2 Lasers In Management of Neoplasia

By Pamela Doskey, DVM For The Education Center

Neoplasias are an unfortunate part of veterinary medicine and surgery. Due to the nature of our housecall practice, we see a higher than average percentage of senior pets, which often means a higher percentage of neoplastic cases as pets age.

With every tumor removal, there is a question as to what you will encounter once you get below the surface. How fibrous is it? How vascular is it? Will it be encapsulated or will it invade the underlying tissue? Using a CO2 laser really helps to incise and dissect tissue as well as control bleeding. It can make a difficult surgery much less daunting.

In this article, we will discuss a few cases of pets with neoplasias, either cutaneous or abdominal, that were surgically managed using a CO2 laser. I have been using CO2 lasers since 2000, and have since dispensed with scalpel blades and exclusively use our laser for surgery.

Our practice currently uses a flexible fiber CO2 laser, and I use primarily Aesculight tipless adjustable handpieces so that I can choose the focal spot size of the laser beam and adjust it seamlessly if needed while in surgery. 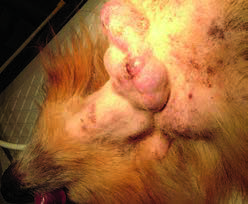 Figure 1. Cierra, a 15½-year-old Pomeranian, presented with a large tumor at the base of the neck. 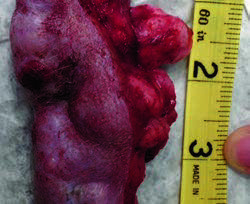 Figure 2. Excised tumor from Figure 1 extended into the underlying tissue. 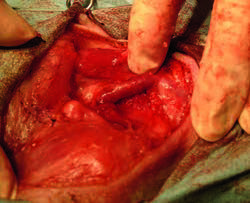 Figure 3. The CO2 laser allowed delicate and clean dissection of the mass from the carotid artery and provided great hemostasis with smaller vasculature. 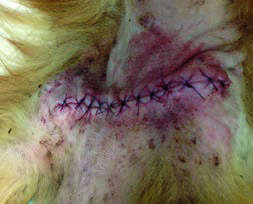 Figure 4. Post-op view of the sutured incision after the removal of the tumor from Figure 1.

Cierra is a 15½-year-old female spayed Pomeranian who presented with a large mass cranial to her sternum at the base of her neck (Figure 1). The tumor was affecting her ability to breathe and swallow comfortably. The owner elected to remove (or de-bulk) the mass in order to improve her level of comfort.

We used the tipless adjustable handpiece with a spot size of 0.25 mm at 5 to 20 watts of power, depending on the tissue being dissected. This mass extended into the underlying tissue, applying pressure on the surrounding structures (Figure 2).

The carotid artery was connected to and directly feeding this tumor. Using the CO2 laser allowed delicate and clean dissection of the mass from the artery, as well as generally providing great hemostasis with smaller vessels (see Figure 3). There was minimal blood loss with this surgery, and Cierra recuperated quickly with negligible discomfort (see the post-op view of the sutured incision in Figure 4).

It has been several months post-op for Cierra, and she is doing great. Her oxygen saturation has greatly improved. She is eating well and is playful again. 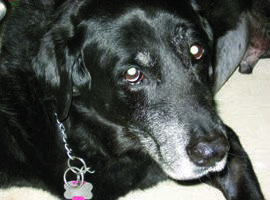 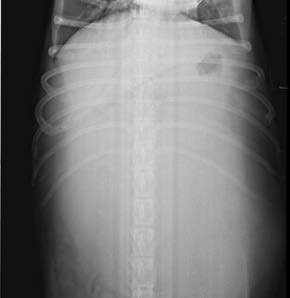 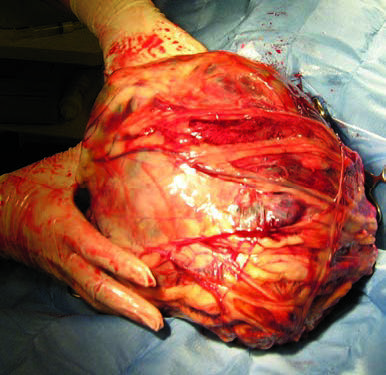 Buddy was a 16-year-old male neutered lab who presented for a second opinion with weakness, vomiting, and inappetence (Figure 5). His owners thought that he was just painful from his arthritis/hip dysplasia. Physical exam and radiographs revealed a large abdominal mass (Figure 6). During exploratory surgery, we found an 11-pound neoplastic spleen with omental adhesions over much of the splenic surface (Figure 7).

The laser was used at 12 to 20 watts of power with the tipless adjustable handpiece set at a 0.4 mm spot size. It greatly aided in removing adhesions quickly and assisting in hemostasis with smaller vessels. Hemoclips ligated the larger vessels.

His recovery was fairly quick and he went back to a normal senior dog’s lifestyle. This splenectomy allowed Buddy to have an extra 12 months of quality time with his family. 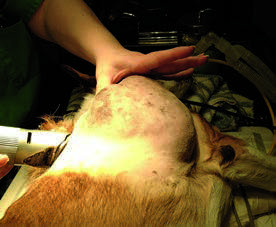 Figure 8. Pitiful, a 14-year Corgi, had a large mass on her right thorax. 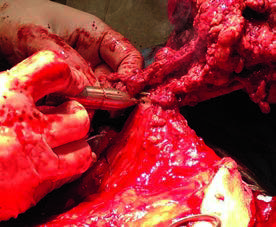 Figure 9. Intra-op view: the CO2 laser proved to be invaluable in dealing with smaller vessels in the extremely vascular tumor mass from Figure 8. 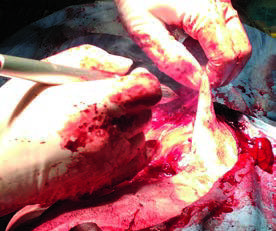 Figure 10. Intra-op view: the CO2 laser helped the surgeon to undermine surrounding subcutaneous tissue in order to allow the surrounding skin to close over the large defect created after the tumor removal. 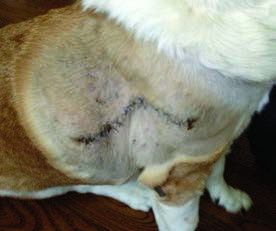 Pitiful is a 14-year-old female spayed Corgi who had a large mass on her right thorax just caudal and dorsal to her right front leg, over the shoulder blade (Figure 8). It was impairing her ability to walk and recline laterally.

Her owner elected to have the mass removed or surgically de-bulked to provide her increased comfort in her daily life. We used the tipless adjustable handpiece with a 0.4 mm spot size at 18 to 20 watts of power.

This mass was extremely vascular, which made the laser invaluable in dealing with smaller vessels (Figure 9). CO2 lasers can significantly reduce blood loss during this type of procedure. In addition to assisting the removal of the large mass, the laser also helped me undermine surrounding subcutaneous tissue to allow advancement of the surrounding skin to close the large defect created once the tumor was removed (Figure 10).

The dead space was then closed and a suction drain was placed. Tension-relieving sutures were used as well. While there was still some tension at the center of the incision, it healed beautifully (Figure 11). It is several months post-op and Pitiful is comfortable and much more playful. 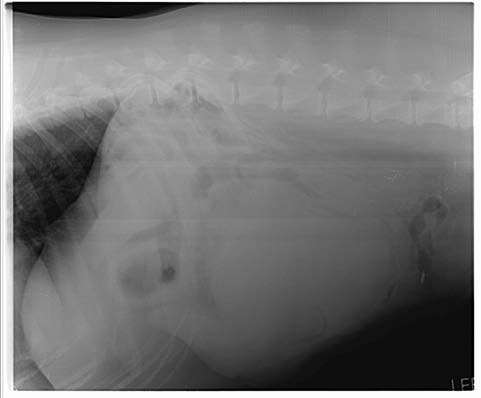 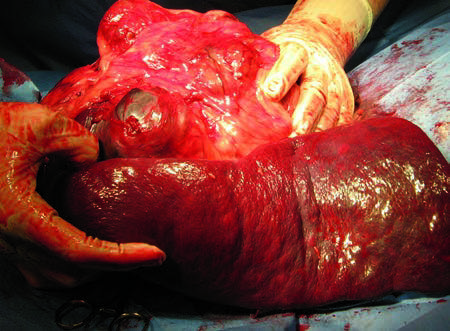 Ben was a 12-year-old German shepherd mix who presented for a second opinion with pale mucus membranes, vomiting, and weakness. Physical exam and radiographs showed a large splenic mass (Figure 12).

On exploratory, we found a nine-pound neoplastic spleen with numerous omental adhesions (Figure 13). We used the tipless adjustable handpiece with a spot size of 0.4 mm at 14-20 watts of power during surgery. The laser helped to quickly and cleanly break down the adhesions with minimal bleeding. Hemoclips ligated the larger vessels. Ben enjoyed 2½ more years with his family before he developed GDV and died.

The majority of our clients consider their pets part of the family. These clients want to pursue any reasonable option available to increase the quality and quantity of time that they can spend with their loved ones. CO2 lasers help us to achieve more precise results with less blood loss as well as less pain and inflammation.

In every case discussed I found the recuperation period was faster and the patient’s pain was greatly reduced compared to past results using a scalpel. I feel that it is our duty as veterinarians to find ways to ease the pain and maximize the quality of life for our patients. I believe that the CO2 laser is a valuable tool in achieving these goals.

Lasers make our jobs as surgeons easier while producing results that are more precise. In each of these cases, the owners were at a crossroads, and they had the choice of either surgery or euthanasia. They all elected surgery in hopes of having their friend around for more walks and tummy rubs. We were delighted to be able to help them enjoy their friends for the extra time that they otherwise would not have had.

Dr. Doskey graduated from Louisiana State University in 1995 and has worked exclusively in small animal and exotic animal medicine with a special interest in soft tissue surgery. She started her house-call practice in 2008, and over the past several years has had surgical cases referred to her by colleagues in the surrounding areas. Dr. Doskey has been using flexible fiber waveguide CO2 Luxar lasers since 2000.

This Education Center story was underwritten by Aesculight of Bothell, Wash., manufacturer of the only American-made CO2 laser.

In using Laser we affect a decrease in pain, swelling, and bleeding during surgery. The laser is used in place of a traditional scalpel. It is very useful in almost every procedure, including such procedures as lump removal, oral and skin surgery. We have...