By Peter Vitruk, Ph.D. For The Education Center The key to the success of soft tissue lasers is their ability to cut and coagulate the soft tissue at the same time. 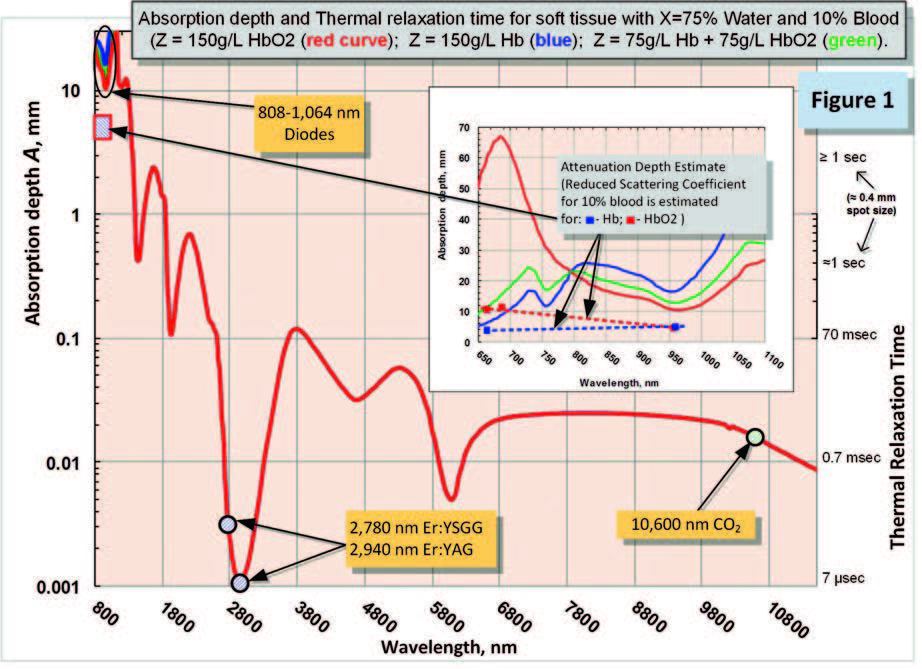 Optical absorption depth (and estimated Near-IR attenuation depth) spectrum for sub-epithelial and subdermal connective soft tissue with 75 percent water and estimated 10 percent blood presence (containing hemoglobin and/or oxyhemoglobin) at normal concentration of 150g/L can be derived from soft tissue absorption and scattering coefficients and is presented in Figure 1. Both Erbium laser (approximately 3,000 nm) and CO2 laser (approximately 10,000 nm) wavelengths are highly efficiently absorbed by the soft tissue and, as will be shown below, are efficient at cutting and ablating the soft tissue purely radiantly (non-contact). At the same time, the Near-IR diode lasers (approximately 1,000nm) are highly inefficiently absorbed by the soft tissue (Figure 1) and, therefore, cannot be used radiantly for cutting and ablating the soft tissue. 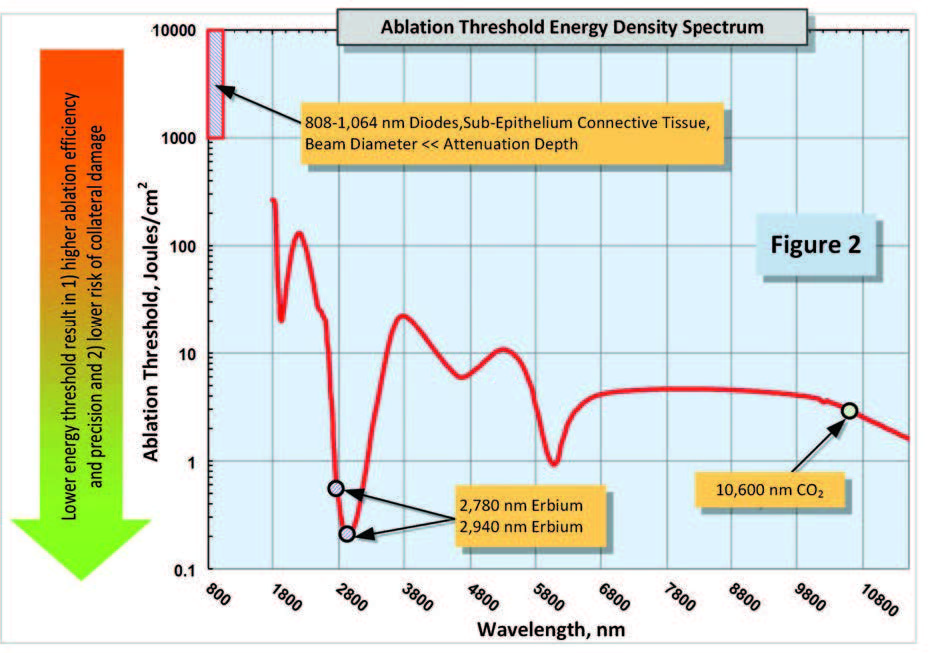 Soft tissue photo-thermal ablation is a process of vaporization of intra- and extra-cellular water by heat generated by laser energy absorbed by the tissue. 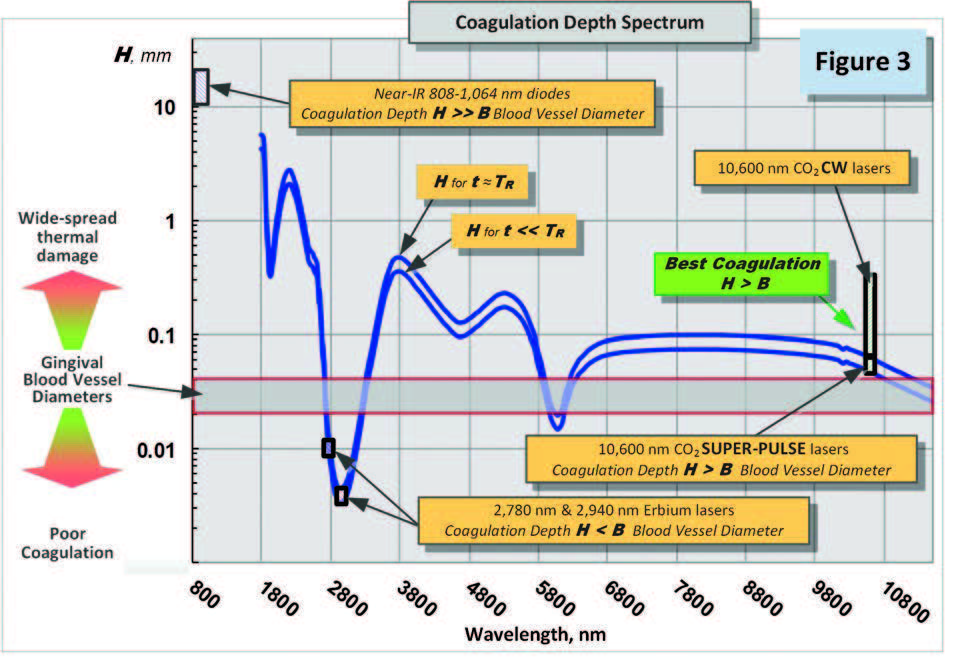 Coagulation occurs as a denaturation of soft tissue proteins that occurs in the 60-100˚C range, leading to a significant reduction in bleeding (and oozing of lymphatic liquids) on the margins of ablated tissue during laser ablation (and excision, incision) procedures. Since blood is contained within and transported through the blood vessels, the diameter of blood vessels B (estimated to range from 21 to 40 μm with average value of 31 μm—from measurements in human cadaver gingival connective tissue[1]) is a highly important spatial parameter that influences the efficiency of photocoagulation process. Photo-thermal coagulation is also accompanied by hemostasis due to shrinkage of the walls of blood vessels (and lymphatic vessels) due to collagen shrinkage at increased temperatures.

The coagulation depth value H relative to the blood vessel diameter B is an important measure of coagulation and hemostasis efficiency; it is easily calculated from the laser energy profile deposited inside the tissue, and is presented in Figure 3. Laser light intensity is assumed at the ablation threshold.

For H>>B (diode laser wavelengths in Figure 3), optical absorption (Near-IR attenuation) and coagulation depths are significantly greater than blood vessel diameters; coagulation takes place over extended volumes—far away from ablation site where no coagulation is required.

For H≥B (CO2 laser wavelengths in Figure 3), coagulation extends just deep enough into a severed blood vessel to stop the bleeding; the coagulation is more efficient then for the above two cases H<<B, and H>>B. Coagulation depth can be further increased by pulse width/rate increase (which allows heat diffusion from irradiated volume into surrounding tissue)—a switch from SuperPulse to CW settings on popular Aesculight and LightScalpel models.

Near-IR diode laser light circa 1,000 nm is not used to optically ablate the oral soft tissue; instead, the diode laser optical energy is used to heat up the charred distal end of the fiber glass tip to 500-900˚C,[1] which then heats up the soft tissue through heat conduction from hot glass tip: soft tissue is burned off (ablated) on contact with the hot charred glass tip, while the margins of the burn are coagulated. Unlike non-contact surgical lasers (such as CO2 or Erbium), the soft tissue ablative diodes are contact thermal non-laser wavelength-independent devices.

Dr. Peter Vitruk is the founder of Aesculight, a member of the Academy of Laser Dentistry’s Science and Research Committee and on the faculty at the California Implant Institute and at Global Laser Oral Health LLC.

With the Aesculight laser, one can change quickly from a cutting mode to ablating mode. Most of the CO2 lasers are designed primarily for cutting. Ablation with these lasers is very tedious and complicated. In dermatology, most of our procedures require...