By Christopher Winkler, DVM, Dipl. ABLS For The Education Center

Benign ear tumors and inflammatory polyps are believed to be brought about by longstanding otitis externa and accompanying chronic inflammation.

Perianal adenomas (circumanal gland tumors) are typically slow-growing, nonpainful and asymptomatic. Given their hormonal dependence, they are known to regress with castration in males. Their surgical removal is recommended should they recur or become ulcerated and infected.

Soft tissue masses in delicate areas such as the oral cavity, nares, eyelids, ear canals and the perianal area sometimes can be challenging to remove surgically. These areas can be prone to infection, are sensitive to pain and can bleed profusely when cut. While surgical sites may be protected with the use of devices such as an e-collar, the perianal area is difficult to protect should the dog be driven to scooting by post-operative discomfort.

Using a carbon dioxide laser helps to ease these burdens.

The CO2 laser cauterizes blood vessels up to 0.5 mm in diameter as it cuts, allowing excellent visualization of the tissues as the surgery proceeds. This is especially valuable when care must be taken to preserve delicate structures such as the cranial rectal artery and caudal rectal nerve.

The laser can be easily configured and programmed for a variety of precise desired effects on tissue. Coupling these factors with the use of a low-profile hand piece facilitates operations in the confining areas of the oral cavity and ear canals, and specially constructed laser delivery tips for use with otoscopes and endoscopes extend our operative reach even further.

Simba, an 11-year-old neutered male toy poodle, presented with a history of chronic otitis externa and a growth in the left ear canal (Figure 1) and a large perianal mass at the 10 o’clock position. A smaller perianal mass was observed on the presenting examination dorsal to the anus at 12 o’clock (Figure 8).

Pre-operative cytology of the masses had been declined by the client but is recommended prior to surgery for a better understanding of differential diagnoses and invasiveness. The use of the laser also could affect the assessment of biopsy margins, making pre-operative cytology important for establishing margins for removal. 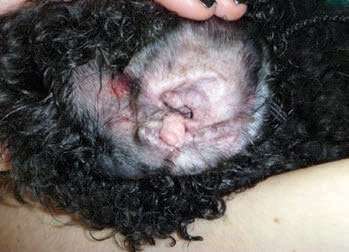 Figure 1. Left ear with polyp prominently visible in the canal. 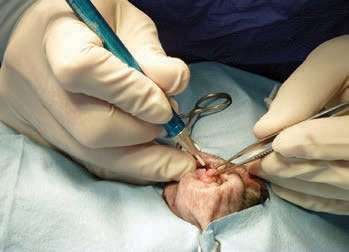 Figure 3. Dissection proceeds through the peduncle as close to its point of origin as possible. 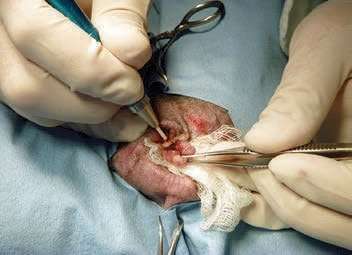 Figure 4. Dissection of the majority of the polyp is complete. 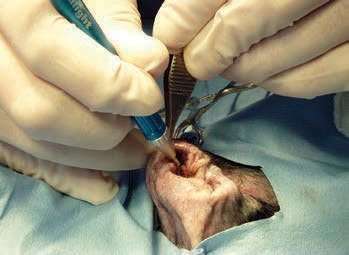 Figure 5. The laser is reset for 6 W CW with a 1.4 mm tip to finish ablating any remaining peduncle. 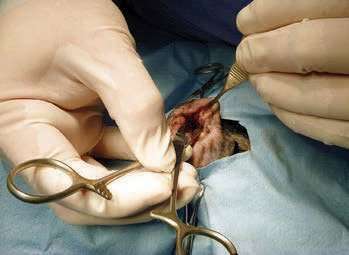 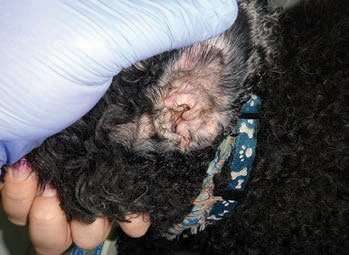 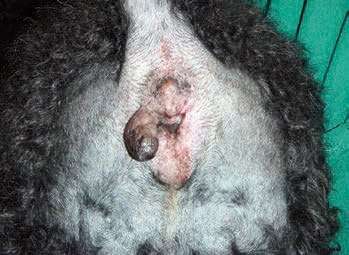 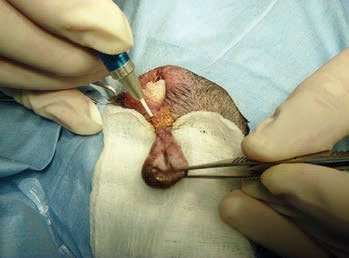 Figure 9. Moistened gauze is used to pack the anus and protect underlying structures as the peduncle is removed. 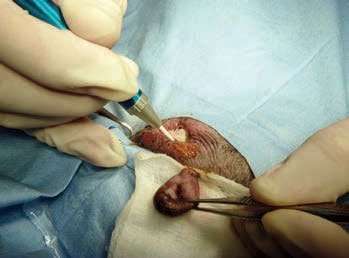 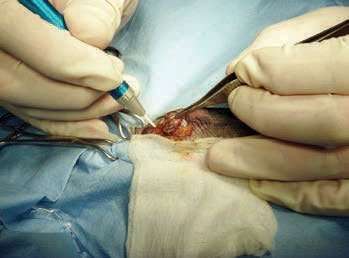 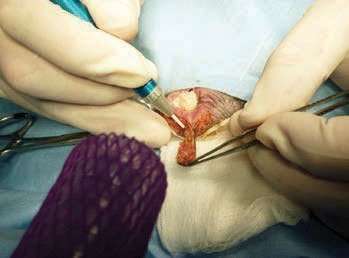 Figure 12. Removal of the smaller mass. 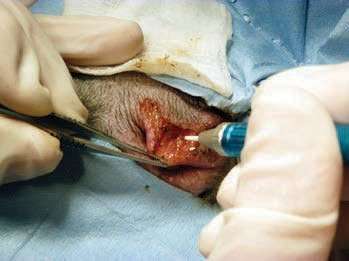 Figure 13. Hemorrhage is controlled by defocusing the hand piece. 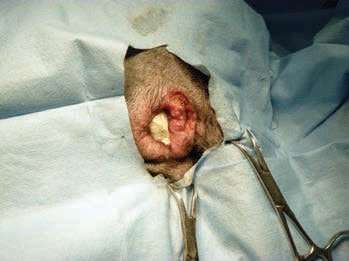 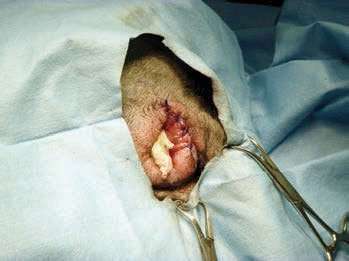 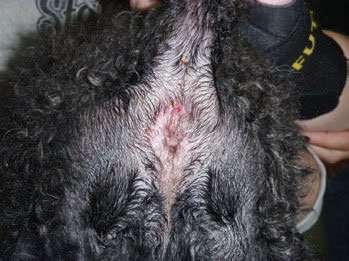 The patient was pre-medicated with dexmedetomidine 125 mcg/m2 IM, carprofen 4.4 mg/kg SQ and cefovecin 3.6 mg/lb SQ. The patient was induced with Propofol 3 mg/kg IV, and general anesthesia was maintained with isoflurane via endotracheal tube.

The left ear was cleaned, prepped and draped, and as much hair as possible was removed from the canal. The laser was set for 10 W continuous wave (CW) with a 0.8 mm ceramic tip (Figure 2).

Dissection proceeded through the polyp as close to its point of origin on the canal as could be comfortably visualized and manipulated, while still taking care to protect surrounding healthy tissue from collateral thermal injury (Figure 3).

Moistened gauze or such flat-bladed instruments as a scalpel handle or groove director may be used as backstops to help protect surrounding tissue; moistened gauze is preferred as shiny metal instruments may reflect laser energy onto the surrounding tissue in the narrow canal space, so they are best used outside the canal where such reflections may be directed safely.

Traction via forceps provided tension to facilitate effective cutting of the polyp. Following removal of the main body of the polyp and its submission for biopsy (Figure 4), the remaining tissue was more easily visualized to be traced back to its point of origin for removal.

The laser was set for 6 W CW with a 1.4 mm tip to gently ablate the surface of the stalk down the canal to its point of origin while controlling hemorrhage (Figure 5). Frequent cleaning with moistened gauze or cotton-tip applicators in between ablation removed char to prevent excessive thermal necrosis and facilitate ablation (Figure 6). If the polyp’s point of origin should extend to the horizontal canal where the hand piece could not reach, dissection via endoscope or otoscope may be required.

Following the ear mass removal, the anus was cleaned and packed with moistened gauze to prevent ignition of flammable gases with the laser, and the perianal area was clipped, prepped and draped (Figure 9). The laser was set for 8 W CW 0.4 mm tip to remove the larger mass at its base in an elliptical incision (Figure 10). No hemorrhaging was observed. The incision was then extended dorsally (Figure 11) to remove the smaller mass (Figure 12). Both masses were submitted for biopsy.

The CO2 laser was then utilized to “paint” the exposed surface to remove any possible tumor cells remaining and defocused to control scant hemorrhage at the 12 o’clock position (Figure 13). After the area was flushed with sterile saline, the subcutaneous tissue was closed via 3-0 PDS horizontal mattress sutures (Figure 14), and the skin was closed with 3-0 PDS in cruciate fashion (Figure 15).

The patient was administered atipamezole 250 mcg/ kg and butorphanol 0.2 mg/kg at surgical recovery, and an e-collar was applied. The patient was discharged later the same day with carprofen 12.5 mg PO BID for seven days. Biopsy results reported the ear mass to be an ear canal polyp, and the perianal masses to be circumanal gland tumors. Removal of both was expected to be curative with resolution of the underlying otitis externa, although the owners were cautioned that regrowth could occur in the ear canal should chronic otitis persist.

Follow-up and suture removal of the perianal site occurred 11 days later and was uneventful, with excellent healing noted at both sites and no regrowth observed (Figures 7 and 16). The patient continues to do very well following topical therapy for otitis externa.

Dr. Christopher Winkler graduated from Ross University School of Veterinary Medicine in 2001 and is the owner of Suffolk Veterinary Group Animal Wellness and Laser Surgery Center in Selden, N.Y. He uses both CO2 and diode laser wavelengths in his practice, often combining them when possible. He is a diplomate of the American Board of Laser Surgery and a member of the American Society for Laser Medicine and Surgery. He appeared as an instructor on CO2 laser surgery at the 2015 American Veterinary Medical Association convention and is available for consultation and training in small animal laser surgery and therapy.