By Ruth Garvenell, RVN, For The Education Center
Originally Published In Veterinary Practice News, June 2017 – Download as a PDF

Zara, a 26-year-old mare, presented for an ulcerated dermal mass (presumed to be a sarcoid) on her left hind fetlock (Figure 1). Prior to 2014, a small, reoccurring wound was present for approximately nine years. In 2014, it developed into a 2-centimeter firm, pink lump, and within a year, it slowly increased to about the size of a golf ball. In October 2016, the tumor suddenly became ulcerated, and in November, the owner opted for surgical removal.

The patient was premedicated with phenylbutazone (anti- inflammatory), penicillin (antibiotic) and acepromazine (sedative/tranquillizer). General anesthesia was induced with romifidine, ketamine and diazepam, and maintained with isoflurane in oxygen via an endotracheal tube.

A 40-watt surgical CO2 laser with a flexible hollow waveguide (Aesculight by LightScalpel LLC, Bothell, Wash.) and a tipless adjustable handpiece (Figures 3-A through 3-E) were used.

The patient was positioned in right lateral recumbency. A large clip and routine skin preparation around the distal metacarpus and the left hind fetlock were performed (Figures 2-A, 2-B). An indelible marker was used to plan 1.5- to 2-centimeter margins for surgical excision (Figure 2-C).

A sterile skin preparation was performed, followed by a standard sterile scrub and gloving.

Drapes were applied and secured with towel clamps. 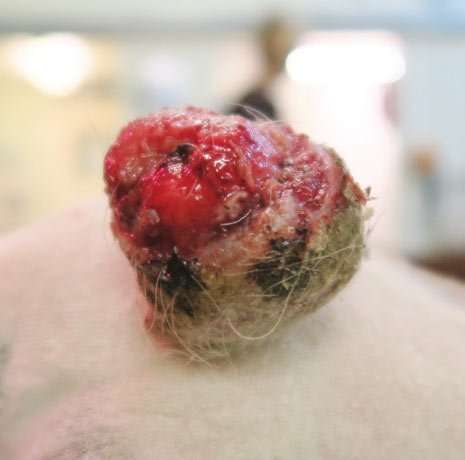 Figure 2-A: Large clip and prep around distal metacarpus and left hind fetlock. 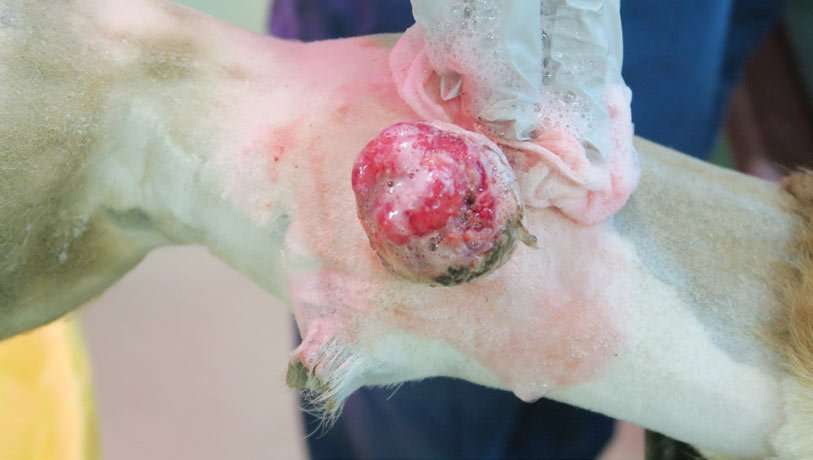 Figure 2-B: Aseptical preparation of the mass. 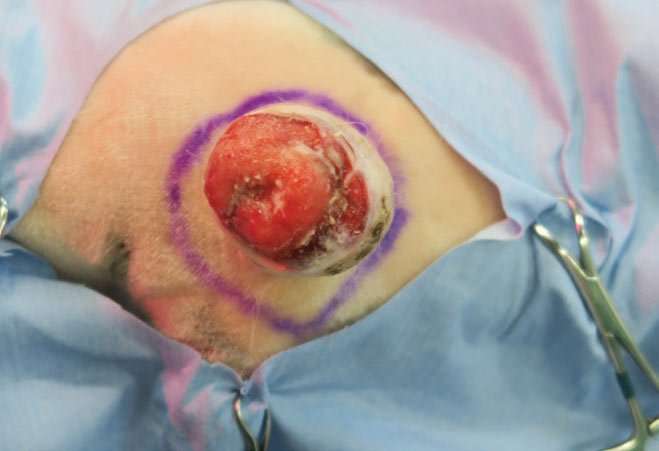 Figure 2-C: 1.5- to 2-centimeter margins for planned incision, marked with an indelible marker

Figure 3-A: Initial elliptical incision around the mass. 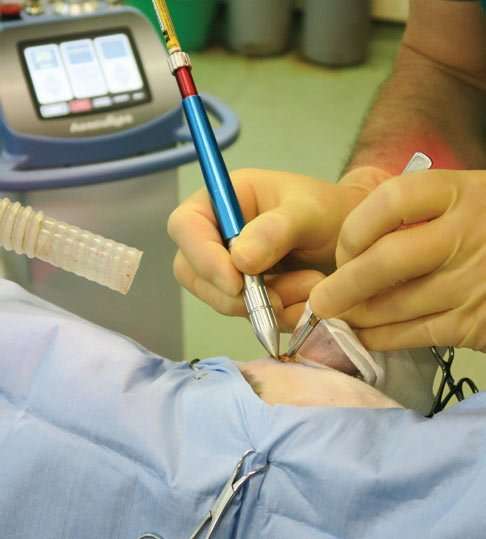 Figure 3-B: Laser incision was deepened. 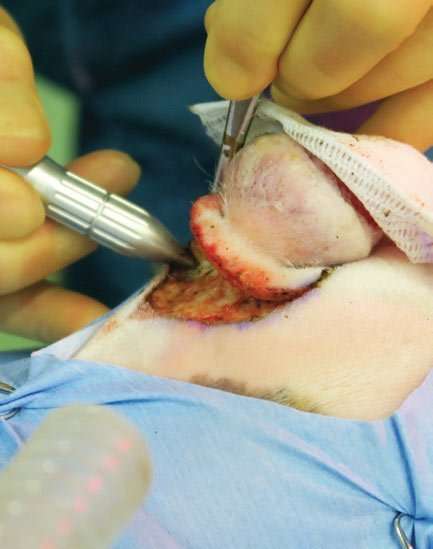 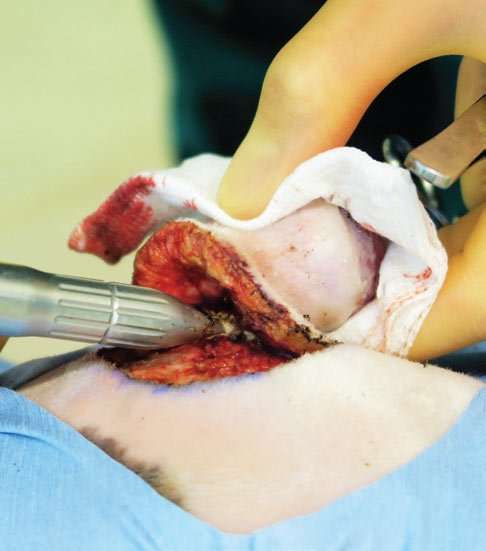 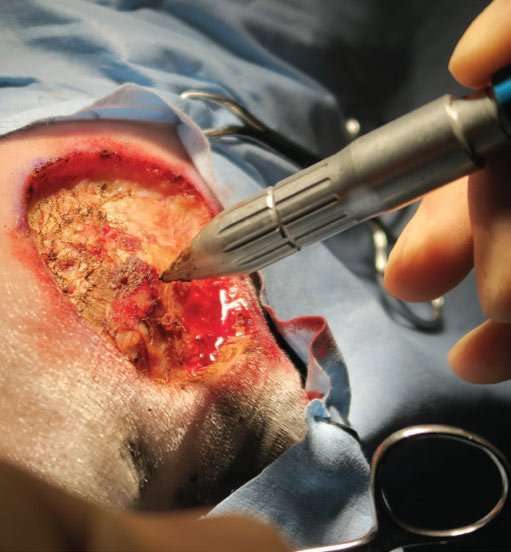 Figure 3-E: After the excison, the underlying surface was ablated to ensure the removal of remaining tumor cells and to achieve hemostasis. 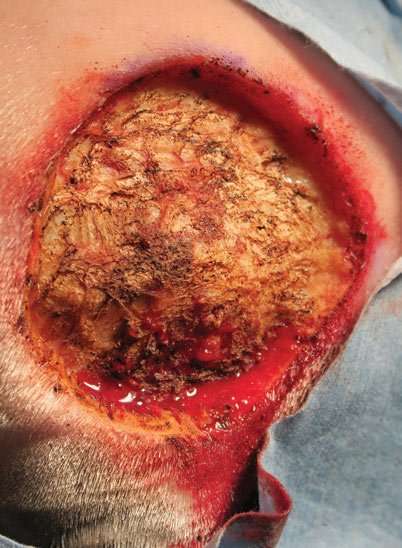 Using the CO2 laser, the mass was circumscribed (Figure 3-A). After the initial incision, traction tension was applied via forceps to ensure faster, more efficient resection (Figures 3-B, 3-C, 3-D). The mass was undermined sharply (Figures 3-C, 3-D).

Post-resection, the focal laser spot size was increased to 1.4 millimeters, and the exposed subcutaneous surface was ablated lightly to remove any possible remaining tumor cells and to control minor bleeding (Figure 3-E).

The large wound was left unsutured to heal by secondary intention (Figure 3-F). Hydrogel was placed within the surgical site, and a single layer bandage was applied.

The excised specimen (Figure 4) was submitted for histopathology. The histopathologic appearance of the mass was somewhat unusual and of an adnexal tumor, and it was most consistent with a diagnosis of an apocrine ductular adenoma. 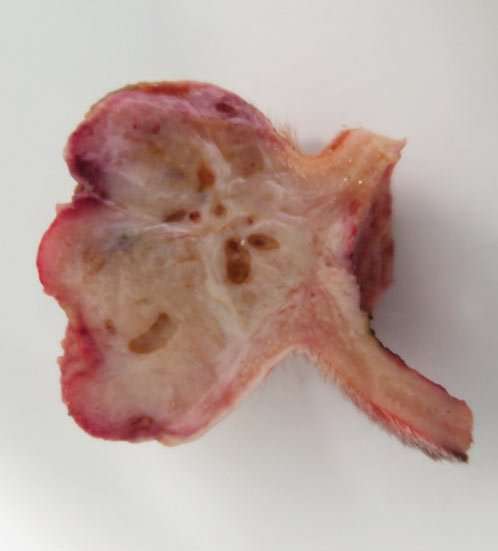 Figure 4: View of the excised specimen sent for histopathology. 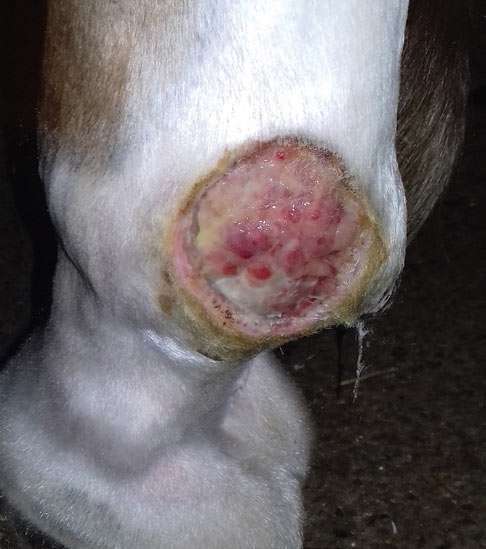 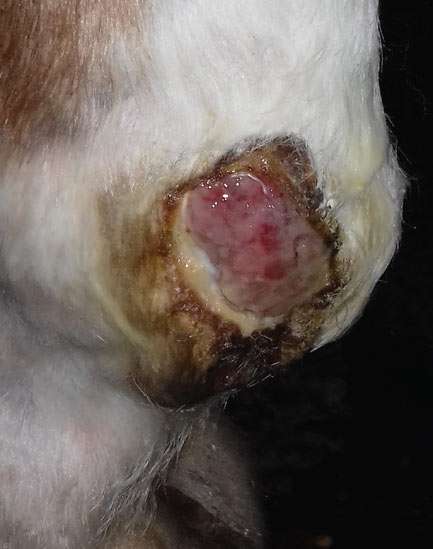 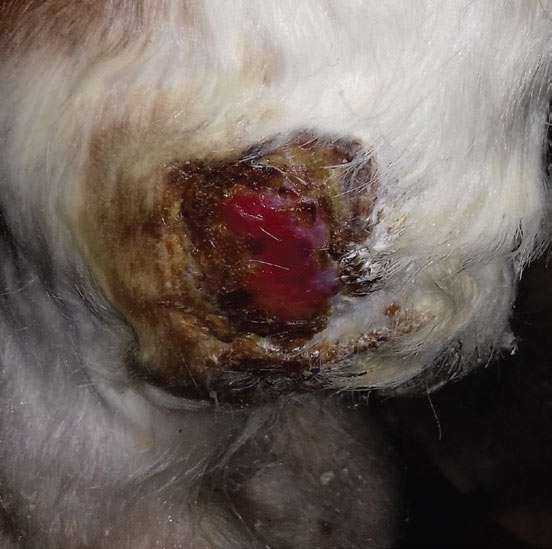 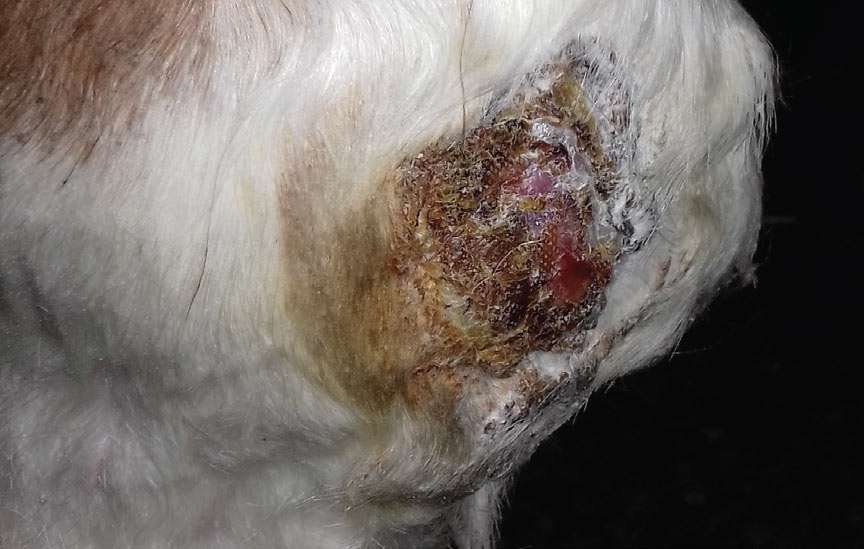 The mare was maintained on box rest for two to three days with in-hand grazing. Phenylbutazone and potentiated sulphonamides (antimicrobials) were administered twice daily for five days. Daily bandage changes were performed initially. Following re-examination, the bandage was changed every other day for a further 14 days, with the addition of an anti-bacterial ointment (flamazime) being applied at every change. Figures 5-A through 5-D show the healing progression of the wound. Eleven and a half weeks after the surgery, the surgical defect almost completely re-epithelialized.

Some of the Benefits of CO2 Laser Surgery

Considering the numerous advantages of the CO2 laser, such as benefits for veterinary personnel and patients, as well as its efficiency and predictable outcomes, the laser is a better alternative to conventional surgery for equine cutaneous tumor removal.

I have been using my [Luxar] laser for all my surgeries for, I believe, 2 decades.

I had a problem recently and phoned in this morning and talked to Chris. I was so impressed with his cheerful, knowledgeable help that I wanted to let you know. Chris was able...

“I love the laser. I use my laser for all our procedures. I still have the same pack of surgery blades from six years ago.