Persistent ductus arteriosus (patent ductus arteriosum bottali or PDA) is a congenital defect of the cardiovascular system in which connection between pulmonary and systemic circulation still exists—via the persistent ductus—after birth. In PDA, due to the existing shunt of the left to right flow, the left ventricle and left atrium develop volume overload and secondary mitral regurgitation. An increase of left atrial size leads to atrial fibrillation and congestive heart failure. When pulmonary resistance increases, the leak in the persistent connection further reverses into right to left flow, resulting in right-heart failure, and peripheral cyanosis, which leads to Eisenmenger’s syndrome.[1,2] 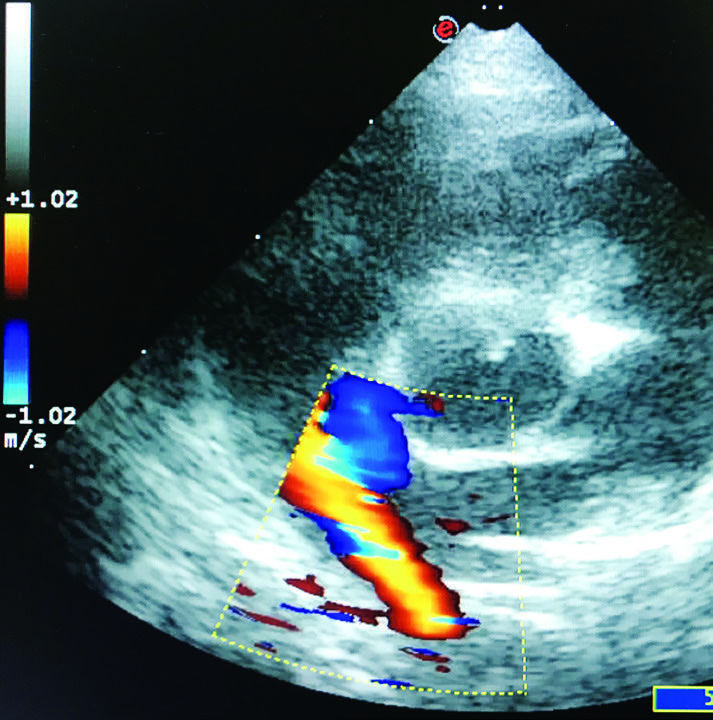 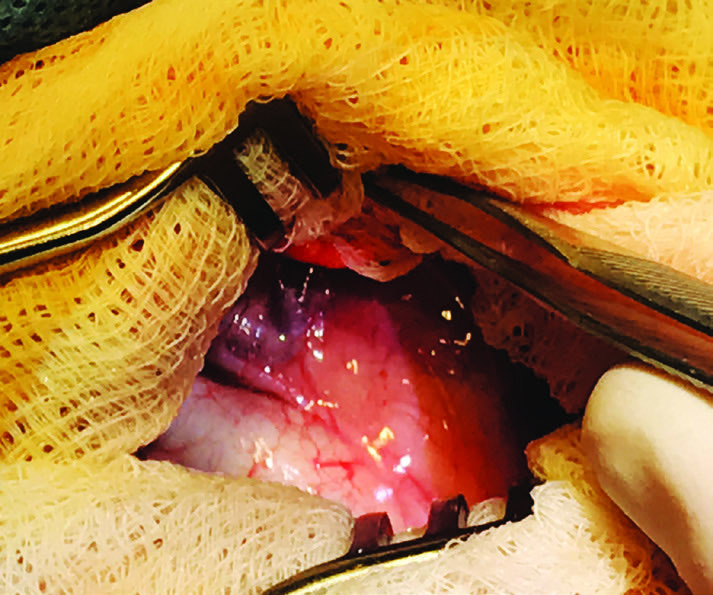 Figure 2: Location of the surgical site in the fourth intercostal space. Here, we see the heart and the aorta with pulmonary artery and between them, the PDA.

Surgical closure of a persistent ductus

There are several methods of achieving surgical closure of a persistent ductus. The classical thoracotomy involves opening the chest and closing the PDA using nonabsorbent surgical sutures or titanium clamps. Other methods involve transcutaneous closure of the duct under the control of a fluoroscope using occlusion devices, such as coils or amplatz canine duct occluders (ACDO).

For best surgical results in a suspected PDA patient, diagnosis should happen during the first visits in the veterinary clinic. Using auscultation, the veterinarian (and cardiology specialist) listens for pathognomical machinery murmur over the entire chest, followed by an ECG, chest X-ray, and echocardiography (which defines the severity of the defect).

The best surgical results are obtained in very young patients; the closing procedure should be performed as early as possible (from six weeks of age up to four to six months of age) and the patient’s body weight should be no less than 0.5 kg. In patients where the ductus has a wider diameter, we can expect a reverse of the flow much faster in the later period. Referred to as “reverse PDA,” this condition complicates surgical procedures and increases the risk of unsuccessful complete closure.

Patients undergoing surgical PDA closure are classified as either ASA III or ASA IV. This depends on the severity of pathophysiologic changes as a consequence of the existing flow and whether the patient requires pharmacological treatment before surgery. 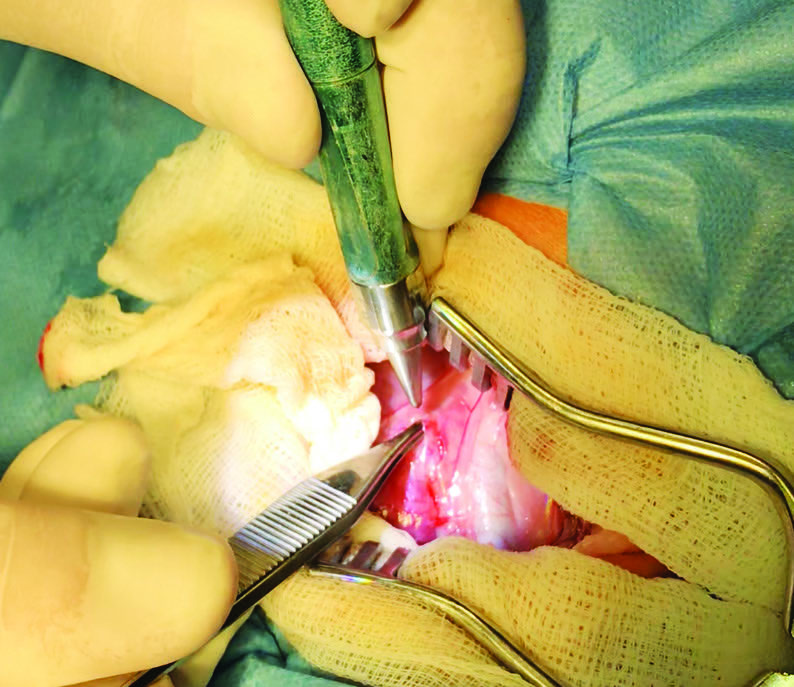 Figure 3: Cutting the pericardium with a CO2 laser. 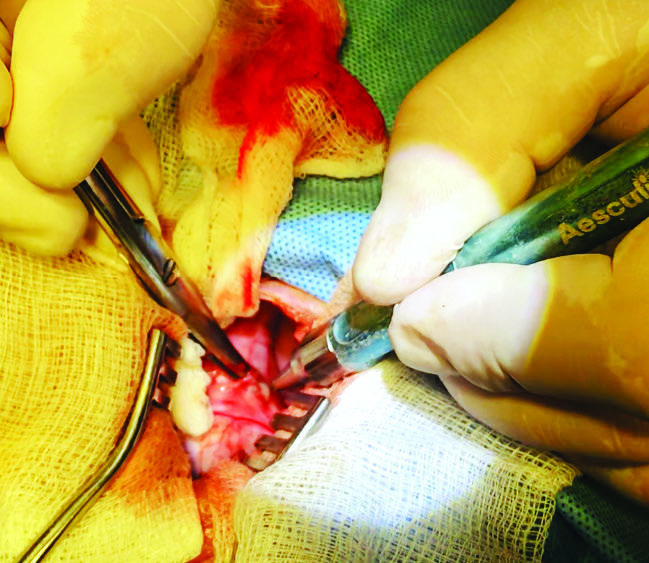 Figure 4: Cutting between the nerves with a CO2 laser. 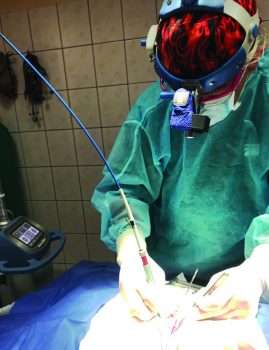 Figure 5: The author, Ziemowit Kudła, DVM, during the procedure.

For successful closure of PDA using thoracotomy, the chest must be opened in the fourth intercostal space after preparing the patient for surgery in a manner consistent with the principles of surgery. We position the patient on the right side, putting a roll of towel under the chest to better expose the surgical site. After putting on surgical drapes, we proceed to the surgery. Using a CO2 laser with an adjustable handpiece focal spot size set at 0.25 mm, 15 watts of power, continuous mode, we open the chest in the fourth intercostal space by cutting through the skin, subcutaneous tissue, and the thoracic muscles, reaching the fourth intercostal space where we cut through the intercostal muscles. At each of these steps, the traditional scalpel surgery may cause bleeding, which requires the surgeon to use clamps or electrocautery to achieve hemostasis. When using the CO2 laser, we see practically no bleeding from the target tissue. With the laser technique, the surgeon doesn’t have to spend time managing excess bleeding, thus reducing the surgical time. Furthermore, the lack of bleeding from cut tissues improves visibility in the operating field. It is especially important in smaller-size patients (600 to 800 g) when even a little bleeding can be dangerous; so the reduction of bleeding with the use of CO2 laser significantly improves the procedure’s success. Prior to the procedure, blood is prepared for transfusion in an emergency situation. Compared to the scalpel, the CO2 laser enables a significant degree of edema reduction due to the closure of lymphatic vessels and diminishes damage to the severed nerve endings, thus resulting in less postoperative pain.

After opening the chest in the fourth intercostal space, we can move the left frontal lobe to expose the left side of the heart and see the persistent ductus. After securing the edges of the wound, we establish a retractor for thoracotomy.

Due to the very high precision required for the incision in the thoracic pleura between the vagus nerve and the diaphragmatic nerve, we also use a CO2 laser with the focal spot size set at 0.25 mm, 8 watts of power, in the continuous mode. Under the mediastinal pleura, a tool is introduced into the cutting line to protect the heart and surrounding tissues. Extreme care is required, as the procedure is performed on the heart, which works all the time, so cutting with the CO2 laser reduces bleeding and provides high precision. We gently move the vagus nerve to visualize the persistent ductus arteriosus. With bent forceps, we begin to prepare the patient’s ductus arteriosus. We add two nonabsorbent sutures around the ductus. Firstly, we tie from the aortic side, gradually closing it for one to two minutes until it is closed completely, all while controlling the blood pressure. Secondly, we tie the sutures on the side of the pulmonary artery. At the same time, the anesthesiologist can control the reduction of the murmur intensity with an esophageal stethoscope, until it completely disappears. Because our patients are mostly pediatric, we control the glucose level throughout the entire procedure.

The next stage is the suturing of the mediastinal pleura between the diaphragmatic nerve and the vagus nerve in order to avoid herniation of the left atrial auricle. Subsequently, we release the left frontal lobe of the lung, which was moved during the surgery to obtain better visibility; the lobe is slowly expanded by the anesthesiologist using the respirator’s PEEP function to restore normal lung airflow. We close the chest surgical wound (pleura, muscles, subcutaneous tissue, and skin) following the protocol described in the literature.[3,4] It is noteworthy that no additional hemostasis is needed throughout the rest of the procedure. During the postoperative period, analgesics and anti-inflammatory drugs, antibiotics, and limitation of movement are prescribed for a period of about 10 to 14 days. This allows for the proper healing of wounds, without swelling and pathological serous exudate from tissues that may appear after surgery performed on such a large surface. 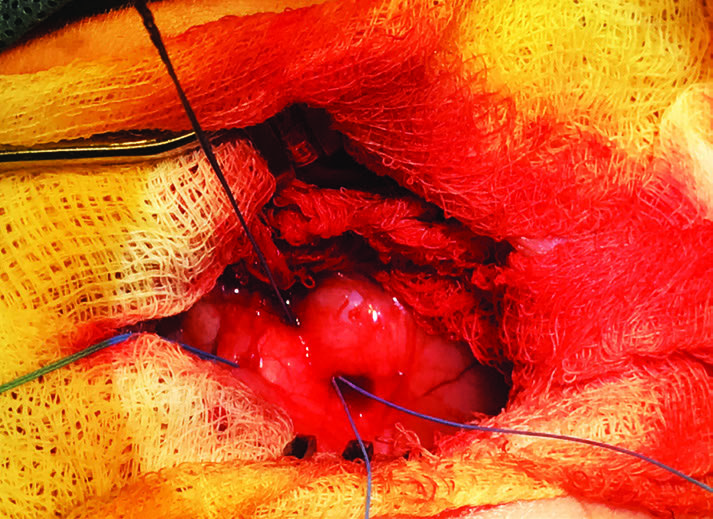 Figure 6: Insertion of surgical threads on the PDA. 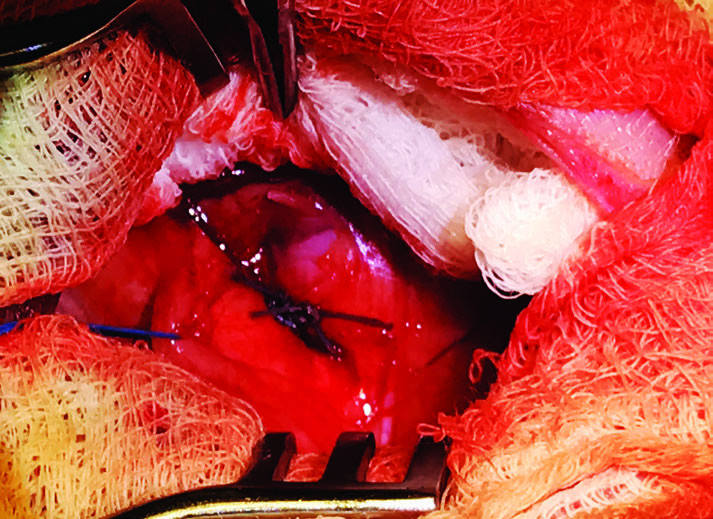 To date, we have successfully performed six procedures of thoracotomy closure of PDA using a CO2 laser. All dogs returned to full mobility within a few weeks of the procedure. One dog showed a slight degree of PDA reopening, but according to the echocardiographic examination, this leakage will not result in the recurrence of pathological symptoms. This patient is rechecked every couple of months and shows no progress in leakage. The reopening of the PDA resulted from the loosening of the sutures, which can happen primarily in large diameter PDAs.

Figure 8: Monitoring of patient’s glucose level during surgery and transesophageal control of the lack of murmur over the heart. 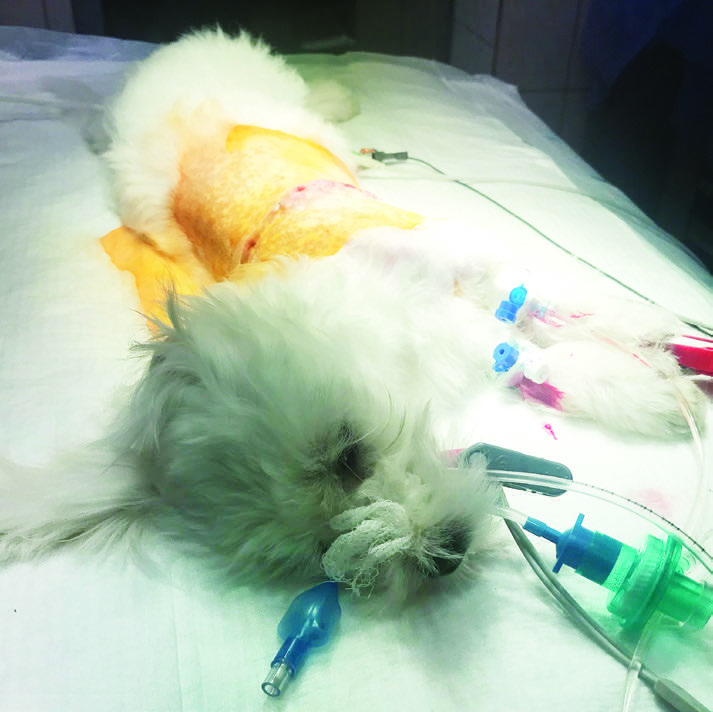 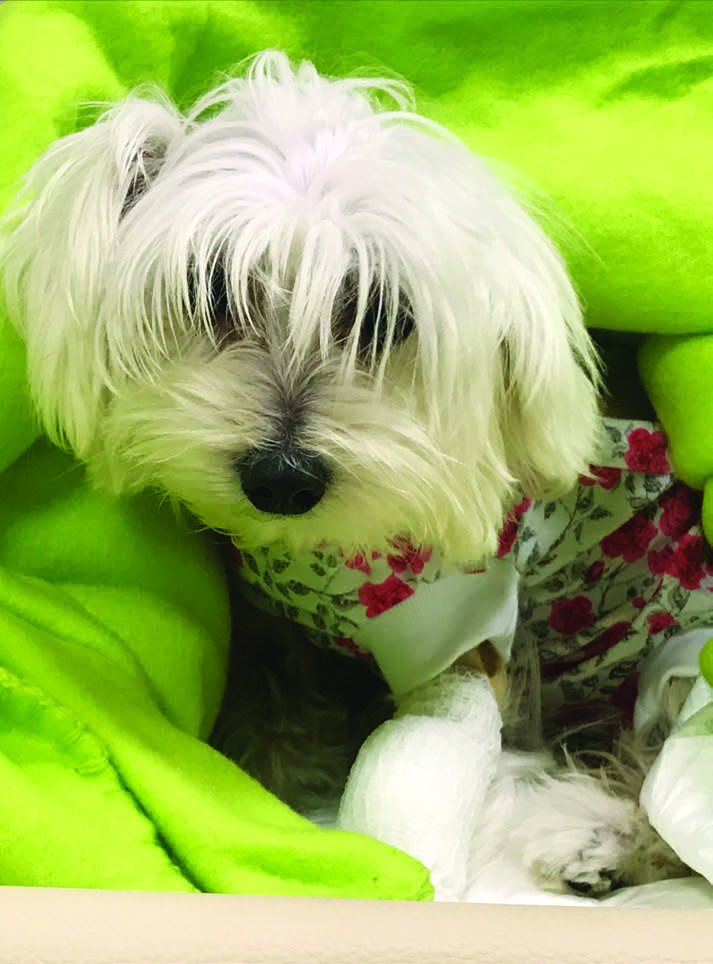 Figure 10: Kiki, the patient, one hour after surgery.

The use of the CO2 laser during thoracic surgery shortens the operative time due to a significant reduction in both bleeding and subsequent tissue edema. These properties enable much faster-wound healing and a shorter convalescence period for our patients, compared to scalpel surgery.

Anna Nikolajdu-Kudła, DVM, was born in Wrocław, Poland, in 1976. She studied at the Wrocław University of Environmental and Life Sciences at the Faculty of Veterinary Medicine. After graduating in 2004, Dr. Nikolajdu-Kudła and her husband opened their own veterinary practice in Bielsko-Biała, Poland, which they continue to this day. Nikolajdu-Kudła works mainly in the fields of anesthesiology, hematology, and dermatology of dogs and cats. She is the author of several publications in the national press on hematology. Nikolajdu-Kudła has participated in many conferences, workshops, and courses as a speaker and participant, and has lectured on the use of CO2 laser in veterinary surgery and on veterinary hematology in Poland. She runs first-aid veterinary courses and courses for dog owners. In 2018, she graduated from the Veterinary School of Anaesthesiology under the direction of Peter Kronen, Dipl. ECVA.

Ziemowit Kudła, DVM, studied at Poland’s Wrocław University of Environmental and Life Sciences, Faculty of Veterinary Medicine. In 2004, he opened his own veterinary practice in his hometown of Bielsko-Biała, which he runs to this day with his wife, Anna Nikolajdu-Kudła, DVM. Looking for new solutions in veterinary medicine, Dr. Kudła purchased an Aesculight, the first CO2 laser offered in Poland. Since 2012, he has adapted all surgical procedures in his practice to laser surgery. Kudła is the author of several publications in the national press on the use of the Aesculight CO2 laser in veterinary practice. He has participated in many conferences, workshops, and courses as a speaker and participant, and has lectured on the use of CO2 laser in veterinary surgery and on veterinary cardiology in Poland. He runs first-aid veterinary courses and courses for dog owners. In 2018, Kudła graduated from the Veterinary Anesthesiology School and received the veterinary anesthesiology technique (VAT) certification.

I don’t know how I would practice without my laser.