By Jon Plant, DVM, DACVD For The Education Center
Originally Published In Veterinary Practice News, March 2020 – Download as a PDF

Tail fold pyoderma (intertrigo) is common in certain brachycephalic breeds, especially English bulldogs, French bulldogs, and pugs. Chronic pyoderma and dermatitis of the tail folds may result in pain, pruritus, and malodorous skin that can be difficult to manage with medical therapy alone. Combined with topical antimicrobial therapy of the tail folds, good hygiene is indicated for these dogs, but is often imperfect due to skin invaginations being quite deep as a result of obesity and/ or screw tails. The treatment burden on the pet owner of chronic daily treatment may contribute to the frequent failure of medical therapy.

Surgical removal of the tail folds and amputation of the tail can permanently alleviate the discomfort associated with tail fold intertrigo. Tail fold caudectomy has a high success rate and complications are uncommon when care is taken to avoid the anus and rectum while dissecting. Controlling hemorrhage by using CO2 laser makes this task easier, while also having the benefit of sealing nerve endings to reduce postoperative pain.

A two-year-old spayed female English bulldog was presented for tail fold caudectomy. Over the previous year, food hypersensitivity had been ruled out as a cause of her facial and perianal pruritus with a hydrolyzed protein diet trial (Royal Canin, Ultamino) and she received allergen immunotherapy formulated based on percutaneous prick testing. She received Cytopoint (Zoetis) approximately every eight weeks. A fold of redundant skin was present dorsal to the tail, forming a blind pocket (Figure 1). Despite the owners cleaning the tail fold daily with antimicrobial pads (Douxo Chlorhexidine) and applying mupirocin ointment, the area remained a significant source of discomfort and odor.

Butorphanol (0.2 mg/kg s.c.) and carprofen (2.2 mg/kg s.c.) were given prior to induction with alfaxalone (2.1 mg/kg i.v.). Anesthesia was maintained with isoflurane via endotracheal tube. Cefazolin (22 mg/kg i.v.) was given 30 minutes before surgery and repeated two times at 90-minute intervals. 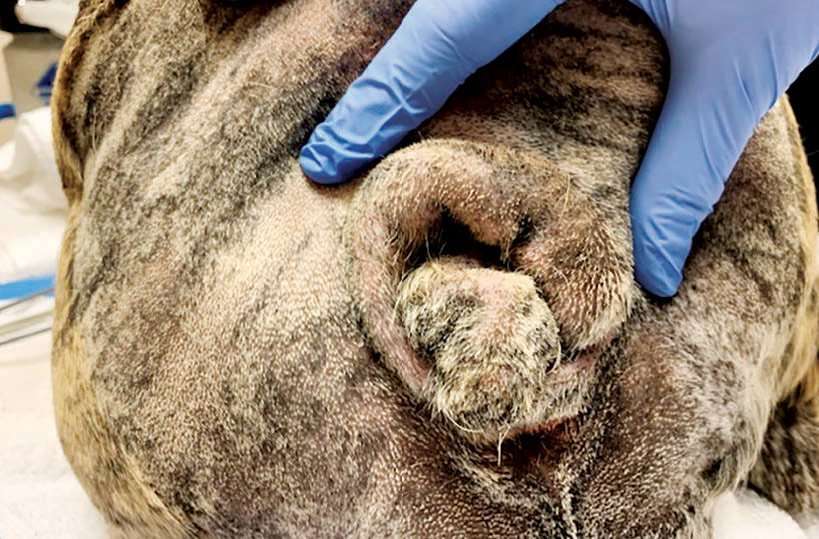 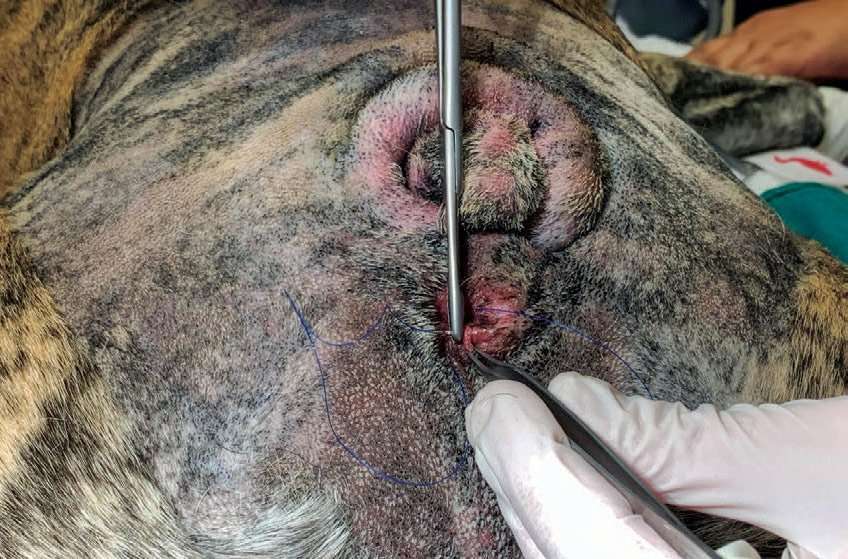 Using a surgical flexible hollow waveguide CO2 laser (VetScalpel by Aesculight, Bothell, Wash.) with a 0.25-mm spot size and a power setting of 20 watts in continuous mode, the skin was first incised in a U-shape dorsal to the tail (Figure 3). A second, longer U-shaped incision was then made from the same points and extended below the tail but dorsal to the anus (Figure 4). Saline-soaked gauze was used to wipe away char. Traction was applied to the skin as the CO2 laser was used to dissect ventrally to the level of the caudal vertebrae at CA2-CA3 (Figures 5 and 6). The laser beam was defocused by increasing the tip-to-tissue distance when needed to control hemorrhage. Dissection along the incision ventral to the tail was performed with a power setting of 10 watts, continuous mode, taking care to stay as close to the tail as possible (Figures 7 and 8). During dissection, the coccygeal vertebrae were repeatedly palpated to provide a landmark and care was taken not to dissect too far ventrally. 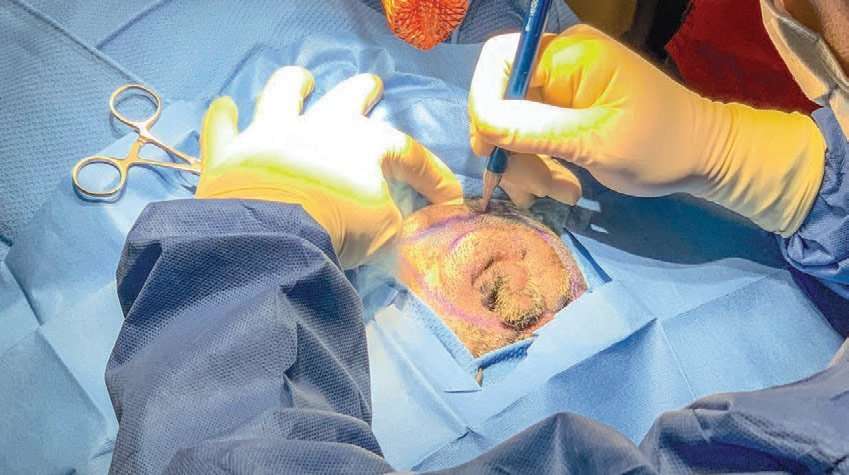 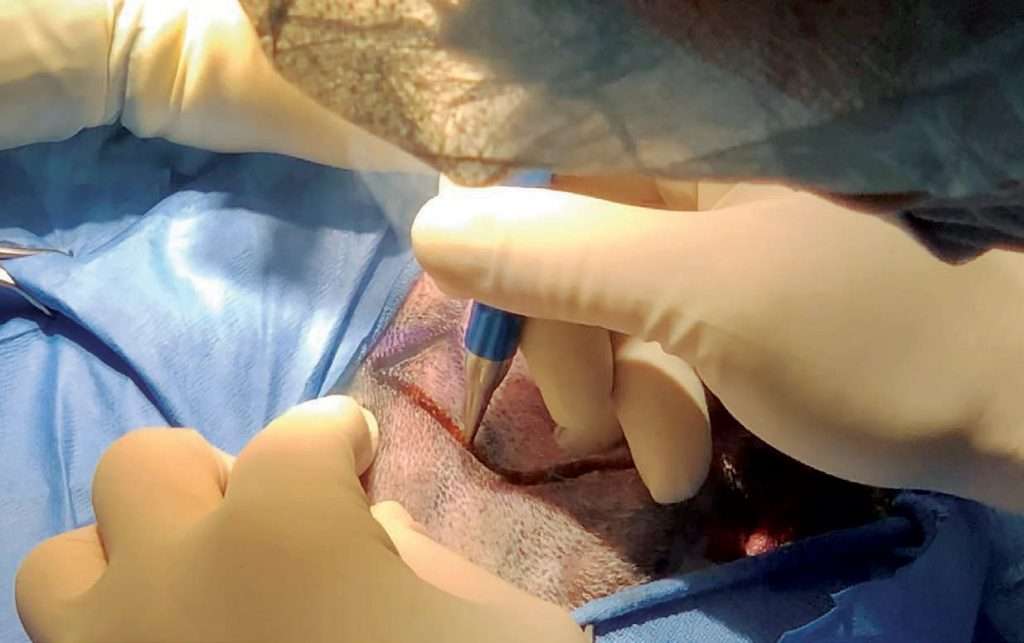 Figure 4: A longer U-shaped incision is made ventral to the tail fold, starting from the same points. 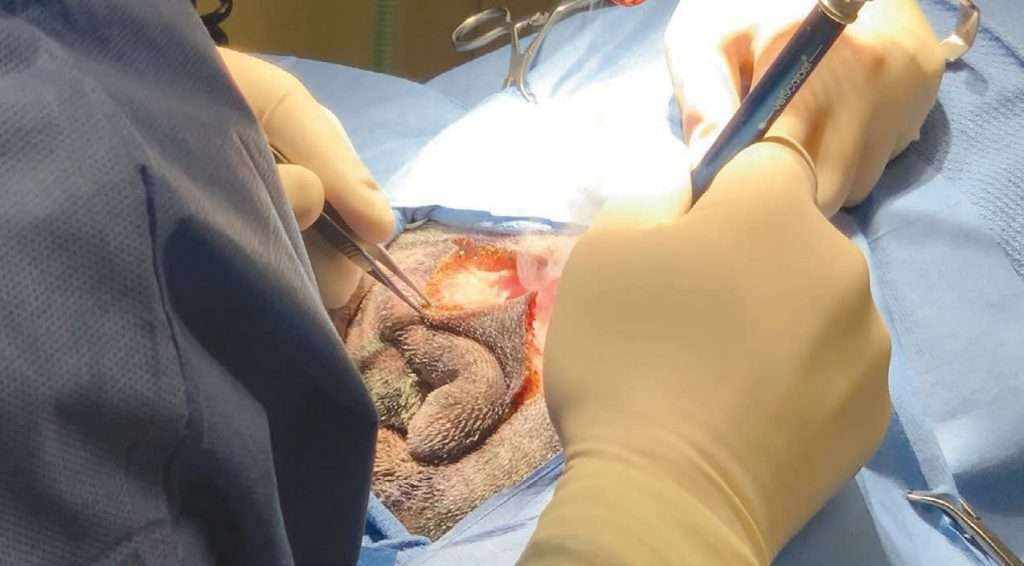 Figure 5: The laser is used to dissect deep to the cranial incision to the level of the caudal vertebrae. 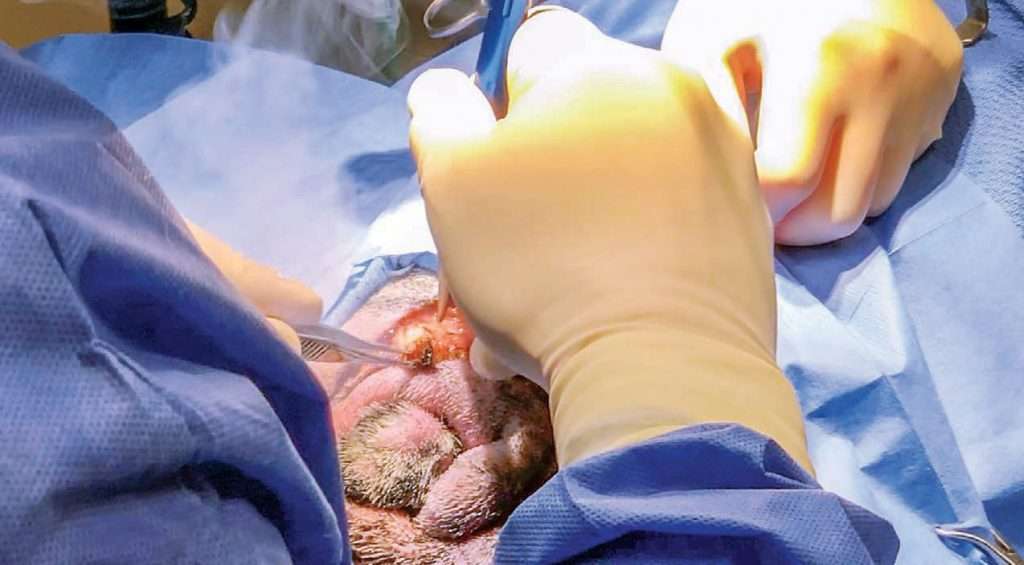 Figure 6: Traction aids in the dissection.

CA3 was tentatively identified and Liston bone-cutting forceps were used to amputate the tail mid-body. One can also dissect between vertebrae if the space can be identified. In this case, there was very little hemorrhage from the vessels of the tail, which include the median caudal artery and the lateral caudal arteries. Hemorrhage from these vessels should be controlled by ligation or cautery, when significant.

Once the amputated tail and skin folds were removed, the area was lavaged with saline and suctioned. The surgical drapes were changed and clean surgical gloves and instruments were used once the chronically infected skin was removed. 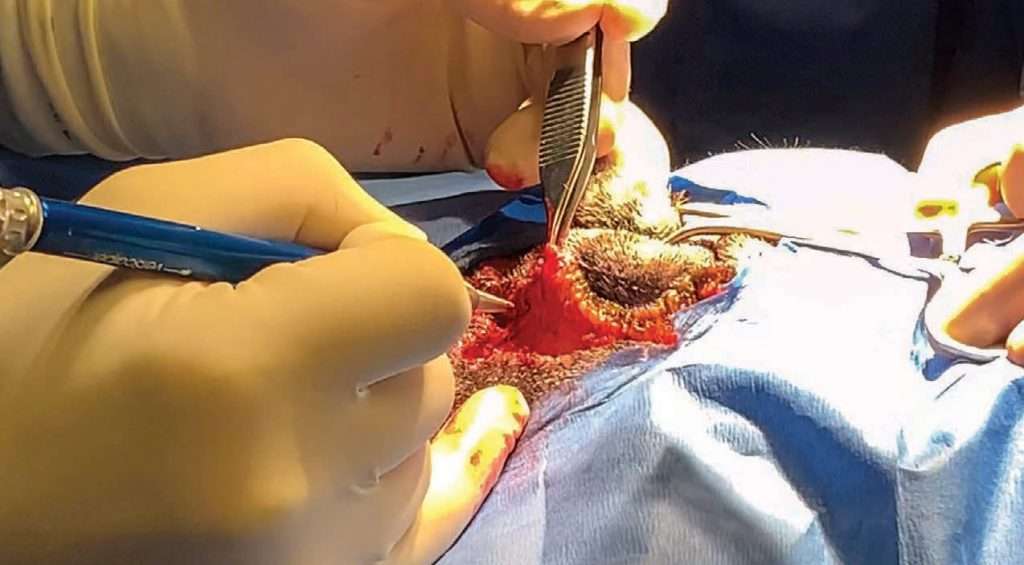 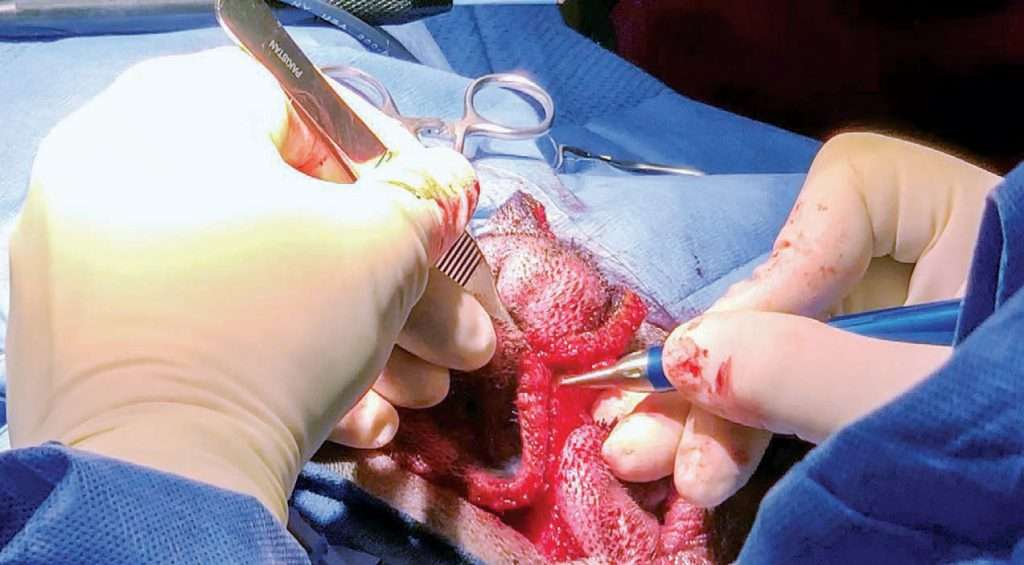 Figure 8: Staying as close to the tail as possible. 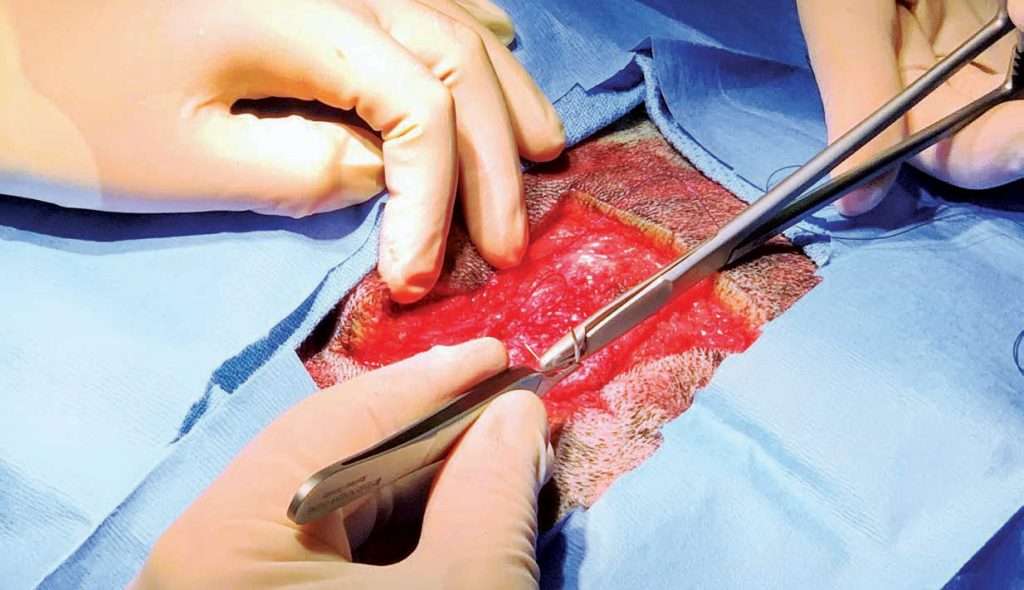 Figure 9: After removal of the tail and associated skin, the subcutaneous tissue is closed in two layers.

Mupirocin was applied to the incision and was continued twice daily for three weeks. An ice pack was held to the region for one hour postoperatively. With the high risk of bacterial contamination of the site, cefpodoxime (7.1 mg/kg p.o. q24h x 21 days) was dispensed. Carprofen (2.7 mg/kg p.o. BID and gabapentin (11 mg/kg p.o. BID) were dispensed. The patient was monitored overnight and did not require additional intervention before being discharged. 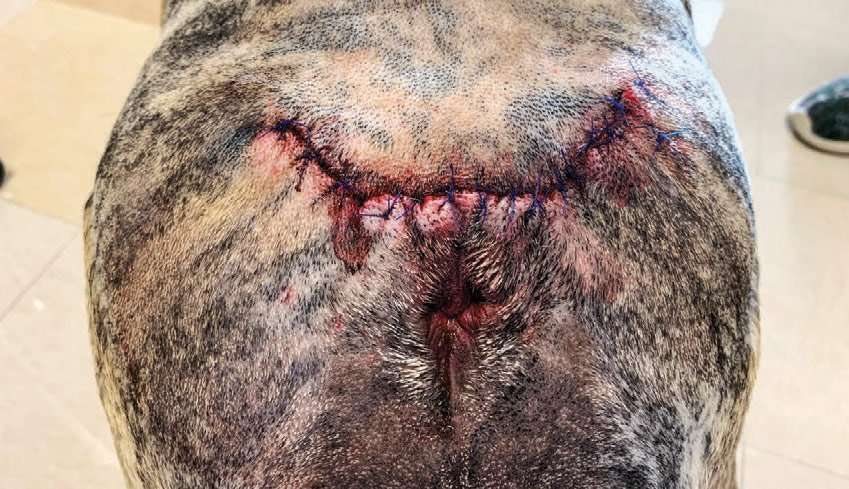 Figure 10: The skin was closed with interrupted cruciate sutures and a cold pack held to the area for 60 minutes during recovery. 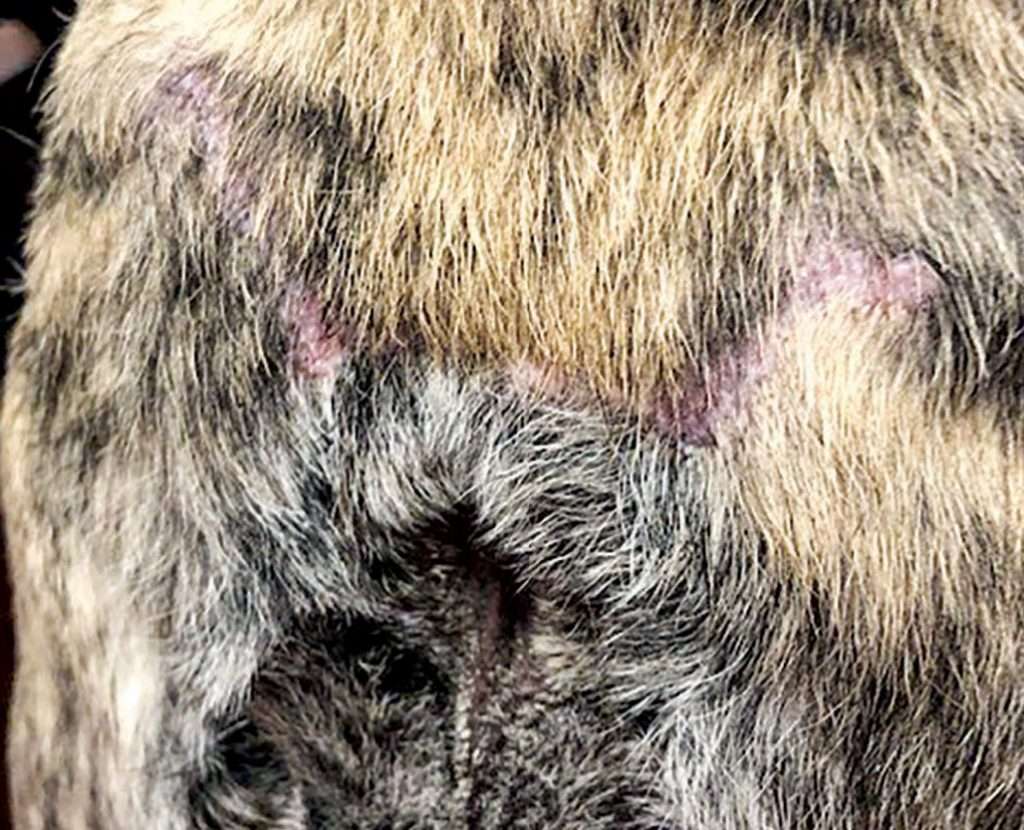 Figure 11: Thirty-six days after surgery, the incision has healed and the owner reports she is “doing great” with no more pain, pruritus, or odor.

Three days after surgery, it was noted a single suture had dehisced. The site was cleaned with chlorhexidine and tissue glue was applied. On the ninth day following the procedure, the owner reported the patient was back to her “wiggly-happy” self. After CO2 laser surgery, sutures are often left in place for three weeks. In this case, the owner returned for suture removal after 24 days, at which time the incision was healed. Approximately five weeks after surgery, the owner reported the dog was doing great and the tail fold issue had resolved completely (Figure 11).

Jon Plant, DVM, DACVD, was an early adopter of the flexible hollow waveguide CO2 laser in veterinary medicine. After 15 years of dermatology referral practice in Southern California, he taught at the Oregon State University, College of Veterinary Medicine, served as a dermatology consultant for Banfield Pet Hospitals and Dechra, founded SkinVet Clinic (skinvetclinic.com) in Oregon, and developed RESPIT allergen immunotherapy. Dr. Plant is a graduate of Reed College and Oregon State University.

With the Aesculight laser, one can change quickly from a cutting mode to ablating mode. Most of the CO2 lasers are designed primarily for cutting. Ablation with these lasers is very tedious and complicated. In dermatology, most of our procedures require...

We use the laser every day that we do surgery, and have had about 80% client compliance. The laser has many uses, and is a lot of fun.