BISC is believed to be unrelated to sun exposure. Papillomavirus (PV) antigen has been found in 45 to 47 percent of affected cats, although the exact role of PV in BISC pathogenesis is unknown.[4-6] Moreover, concurrent Demodex infestation has been reported (possibly due to weakened immune system).[4]

Typically, BISC most commonly affects thick-haired areas on the head, neck, dorsal thorax ventrum, and legs.[4] BISC lesions are normally multiple and characterized by irregularly shaped, scaled, and crusted plaques with peripheral pigmentation skin. Lesions are superficial and confined to the epidermis. Chronic lesions may become ulcerated. Rarely, lesions are so severely keratinized that they may have protruding keratin horns.[3]

The most definitive diagnosis of BISC is made through biopsy and histopathology results. With prompt appropriate treatment, this neoplasm is unlikely to spread to other organs of the body.[4] Therefore it is critical to properly diagnose and detect BISC early. The full extent of the lesions caused by this disease is not appreciable until the patient’s hair is clipped. The more severe lesions can be felt as crusts or raised scabs, but the full extent of the crusts and the associated pigmentation are not discernible due to the thick hair coat. Therefore, shaving the cat in the regions of the lesions is recommended to avoid missing early, mild lesions.

Topical treatment with imiquimod cream is used in humans for Bowen’s disease. In humans, however, there is no thick hair coat and the lesions are less extensive. Application of imiquimod cream to the haired skin of cats is impractical. Imiquimod does not clear the lesions in cats, thus allowing the disease to progress into squamous cell carcinoma—a very serious cancer. In a recent publication on feline BISC, the cat that was treated with topical imiquimod cream only, and the treatment resulted in metastatic squamous cell carcinoma and death of the patient.[7]

If one focuses on only the crusted or ulcerated lesions, the majority of the lesions will be missed. Unfortunately, many people are advised to use this cream or just leave the lesions alone, as there is no other treatment available. Laser ablation is not widely recommended in the veterinary profession at this time.

CO2 laser surgery, however, in the author’s opinion, is typically a noninvasive, effective treatment modality. Conventional surgery is mostly not an option due to the numerous BISC lesions. The laser is preferred because the disease is confined to the outer layers of the epidermis; with the CO2 laser, the clinician can precisely control the depth of ablation to eliminate just the affected part of the epidermis and leave the normal underlying skin intact. Laser ablation completely removes the lesions, thus preventing their development into the more serious squamous cell carcinoma. The cosmetic outcome is normally very good. Germ cells from the remaining hair follicles provide a complete regrowth of both hair and epithelium.

Because BISC is caused by a PV that remains in the skin, new lesions do develop over time. The normal recurrence rate is once per year, with fewer lesions than seen during the initial procedure. The usual case is more advanced when first seen, as often, the owners are not told that laser ablation is and available option. Once the clients see how much better laser ablation is compared to topical imiquimod cream they return sooner to have recurrences treated.

Affected cats are always older. Removal of these lesions keeps them normal in the last years of their life and prevents the development of squamous cell carcinoma, which can be severe and fatal to the cat.

A nine-year-old domestic shorthaired cat was brought to the clinic with multiple crusted, in places erosive, hyperpigmented cutaneous lesions on the head, abdomen, hind limbs, and perianal area. (Figures 1A, 1B and 1C show the shaved skin with the lesions clearly visible.) Histopathological findings confirmed the diagnosis of BISC. 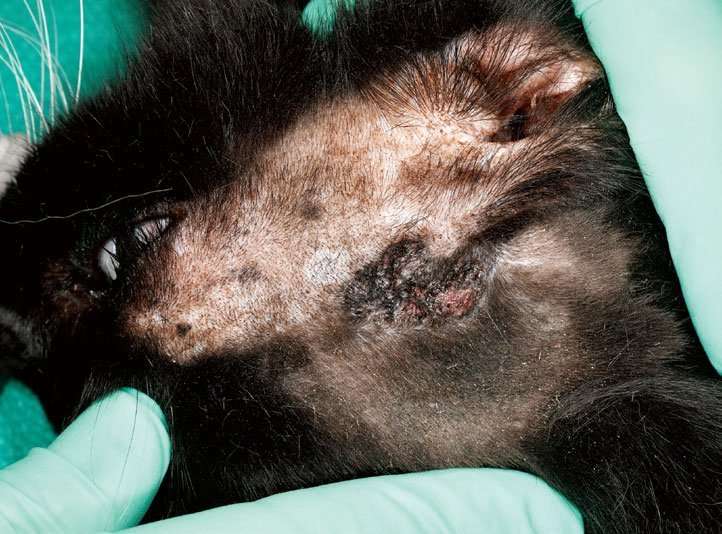 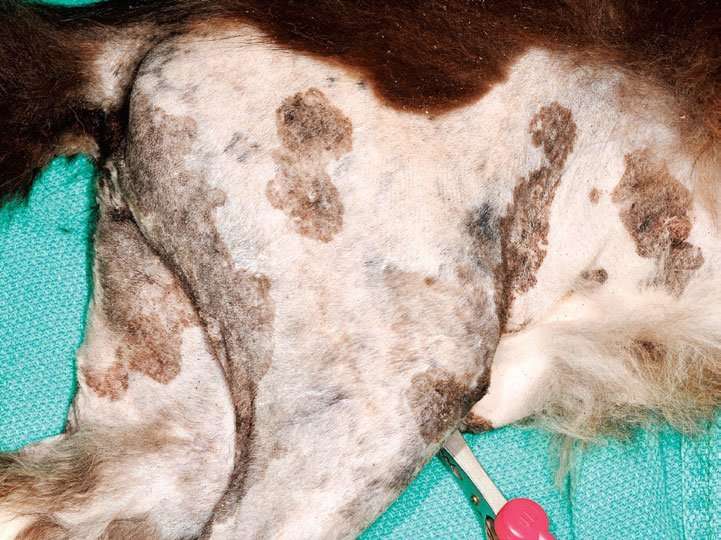 Figure 1B: Side view. 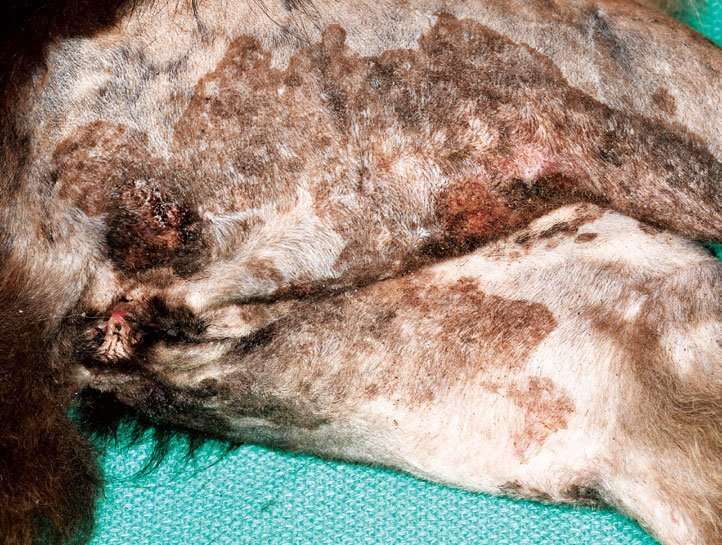 The patient was premedicated with butorphanol. Propofol IV was given to induce general anesthesia. The patient was maintained with isoflurane in oxygen via endotracheal tube.

The lesions were ablated with the VetScalpel laser (from Aesculight in Bothell, Wash.) equipped with the wide ablation nozzle with the focal spot size of approximately 2.5 mm by 0.4 mm (shown in Figure 2 and Figures 4A-C and 4E-F). The following laser settings were used: 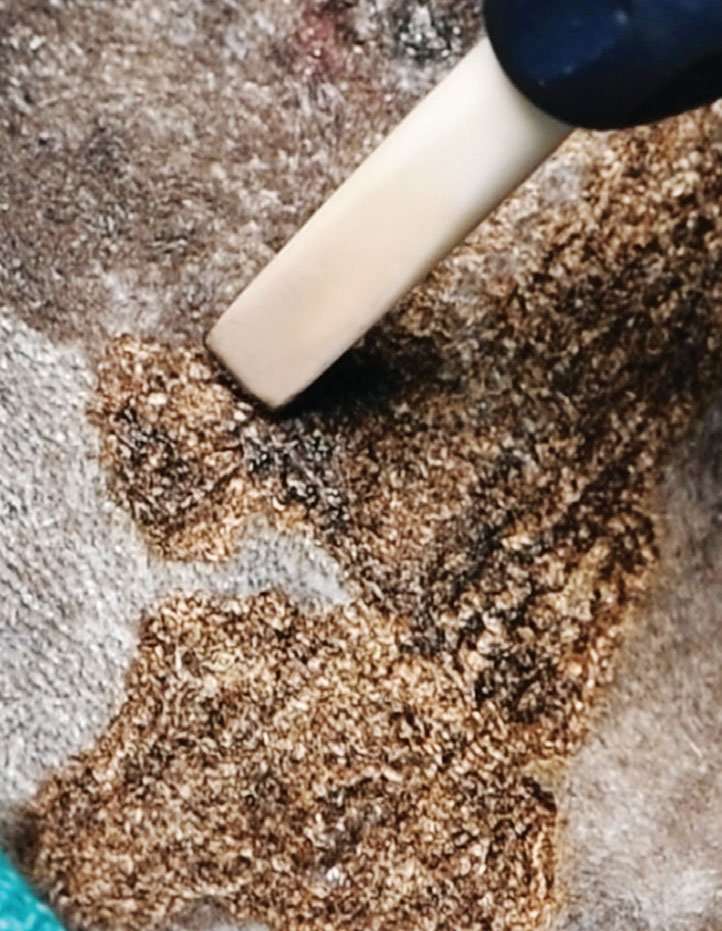 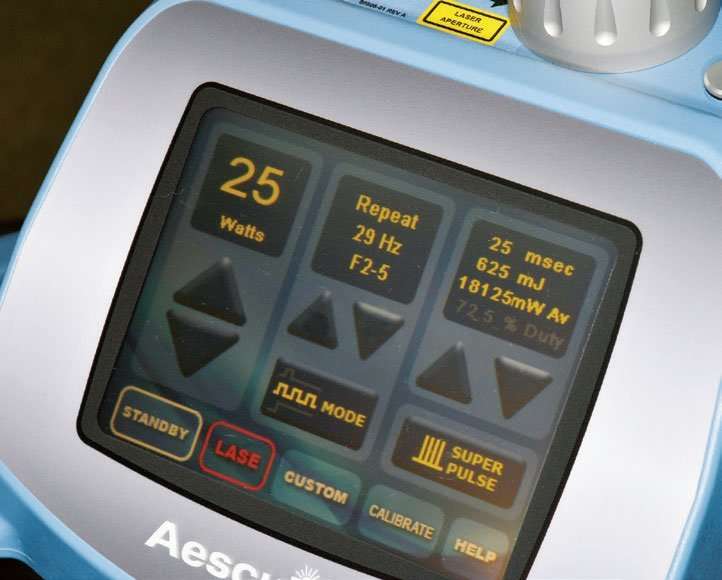 Figure 3: The VetScalpel laser setting used most frequently for ablation of BISC lesions.

The patient was placed in the left lateral recumbent position. The patient’s hair was clipped and the skin was surgically prepped.

The goal of CO2 laser treatment is to ablate the affected epidermis until the level of healthy tissue is reached. The use of the wide ablation nozzle allows covering large areas (this patient had numerous large lesions, so the wide nozzle was especially helpful). The high power of 25 watts enabled the surgeon to move faster, thus reducing the surgical time.

The lesion was “painted” in back-and-forth strokes at the highest power setting at first, until the lesion was mostly ablated (Figures 4A and 4B). Then the lesion was gently wiped with saline-soaked gauze to remove carbonization. The laser settings were then reduced and another laser pass was made (Figures 4C and 4D). If necessary, the lesion was wiped and ablated again (the lowest of the three settings was used at the base of the lesion) (Figures 4E and 4F). Ablation was completed once the lesion pigment was completely gone. With occasional ulcerated lesions, minor bleeding was encountered and easily controlled with the laser energy. 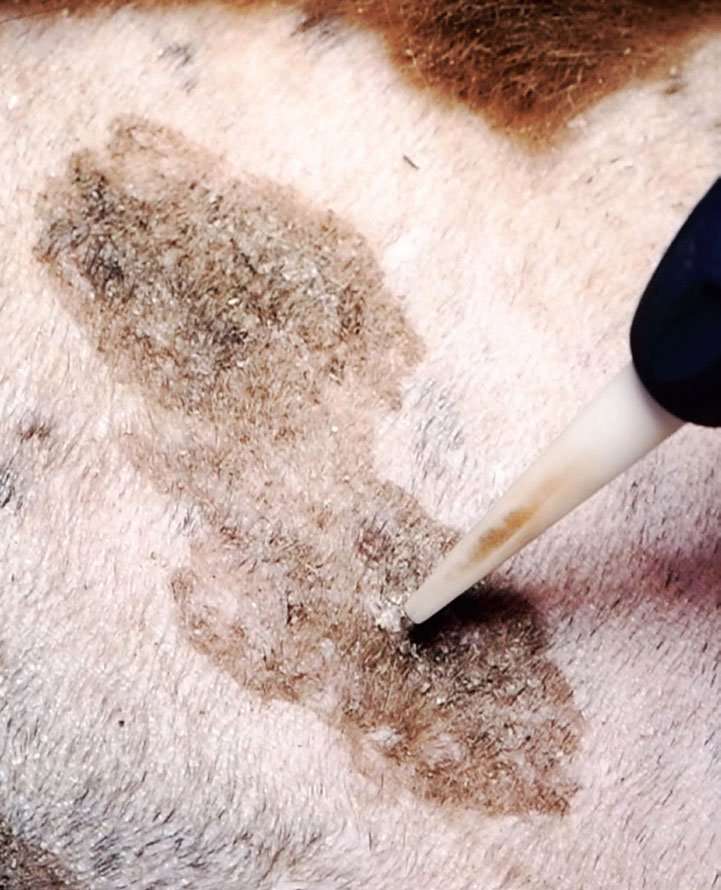 BISC lesion ablation performed with the Aesculight wide ablation nozzle. 4A: Pre-op view of the lesion. 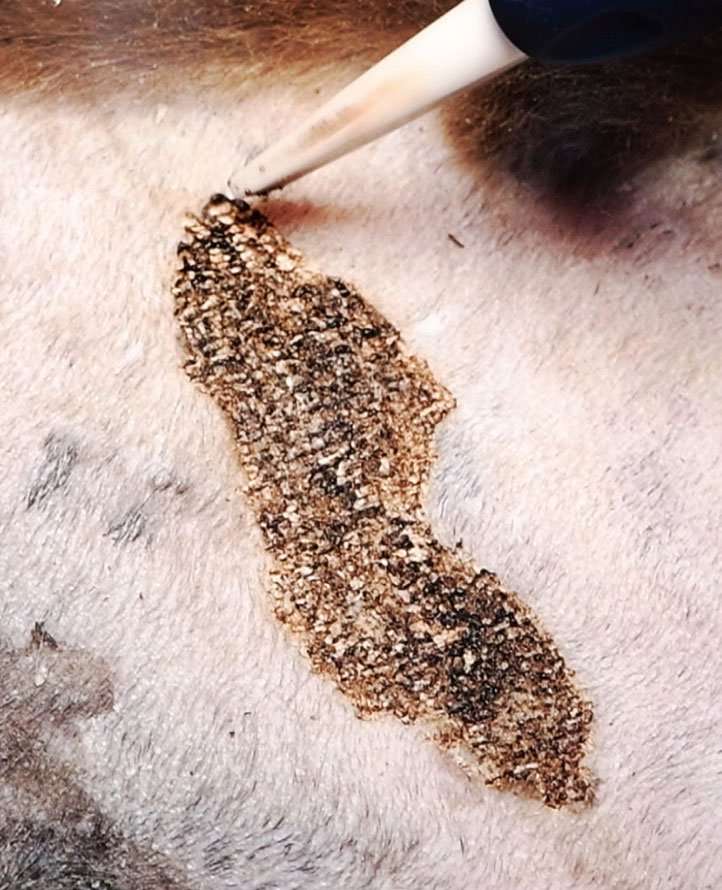 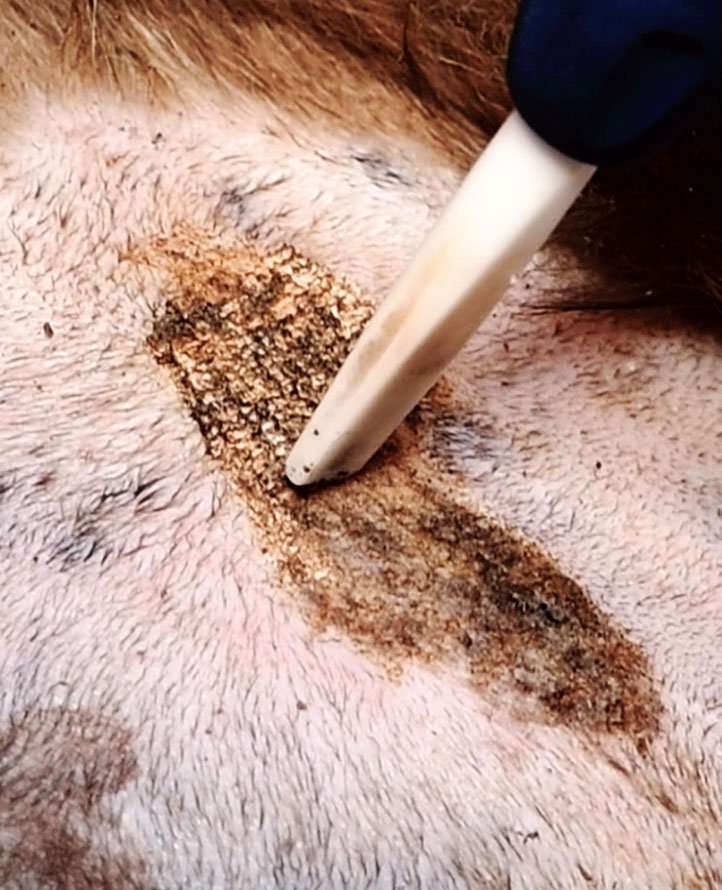 Figure 4C: Carbonization was removed with salinesoaked gauze and the second laser pass was made. 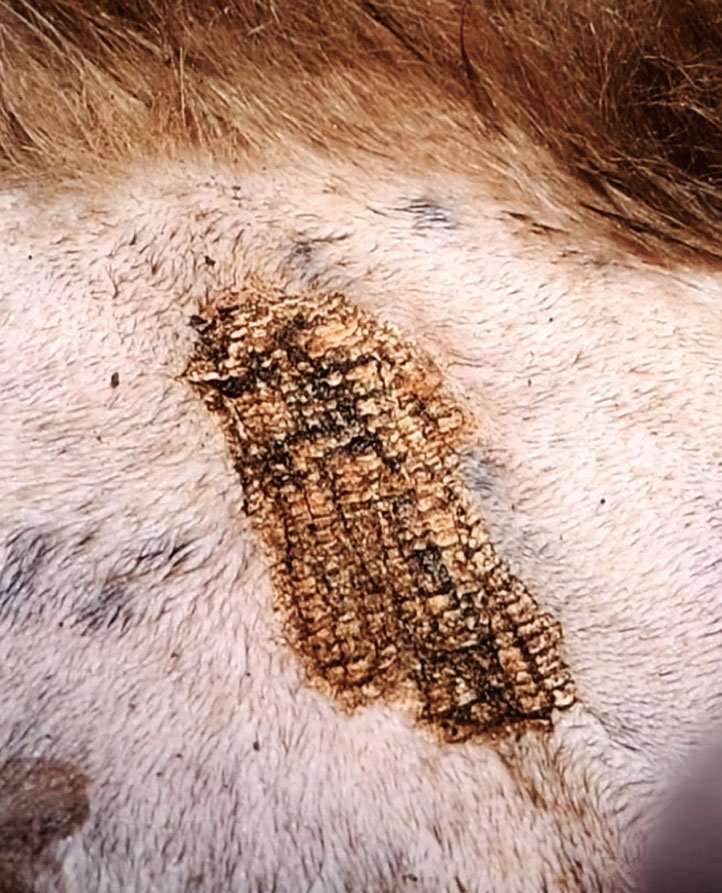 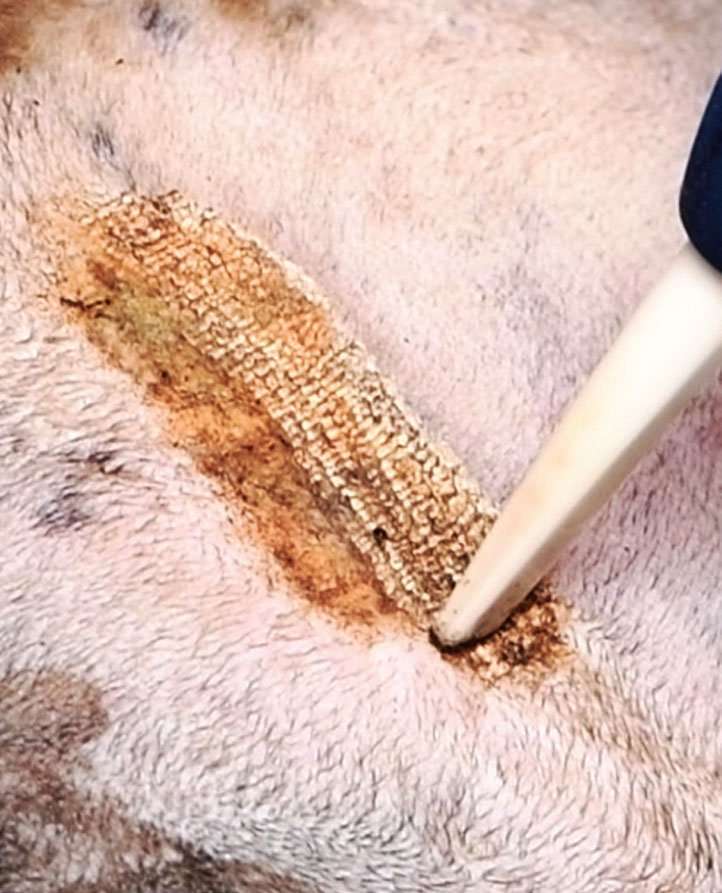 Figure 4E: 4E: Carbonization was removed and the third, final, laser pass was made. 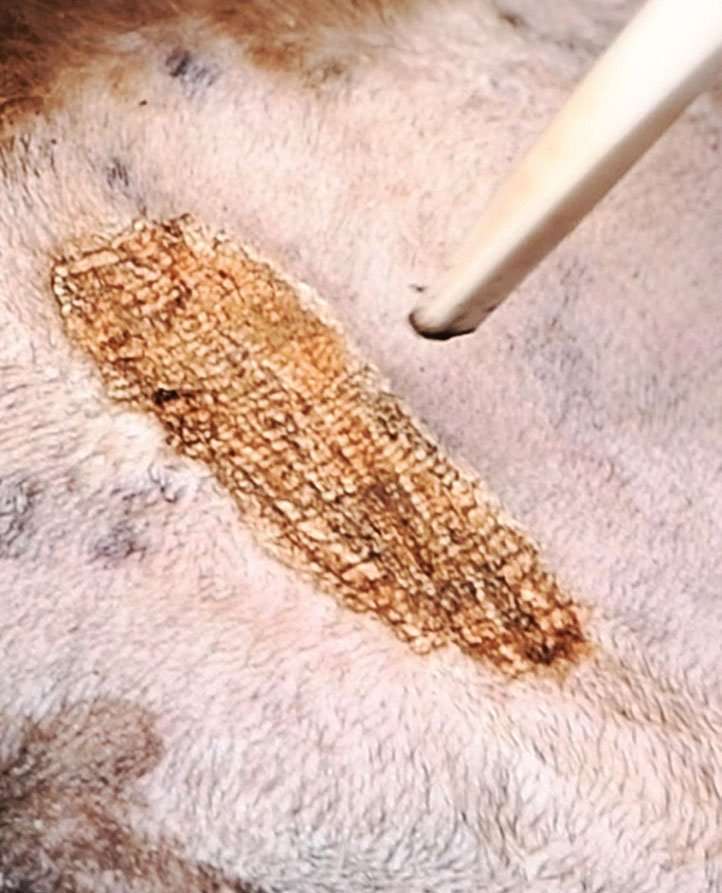 The laser settings typically are changed during the procedure because in the early stages of ablation, the lesions are hard, dry keratin and treatment requires higher power. When the ablation is down close to normal skin, the power is decreased so that only a few cell layers are removed with each laser pass. These lesions are all surrounded by pigment, which is the guide to how deep the surgeon needs to go. When the pigment is gone, the clinician has gone deep enough. During this procedure, a skin tag was located in the perianal area and quickly removed with the laser.

The time for surgery usually depends on the full extent of the disease. In this cat, the lesions were extensive and involved the entire trunk, legs, and head. The surgical time was 90 minutes. Sutures were not required at any point. (In general, some cats may have one or more lesions that have progressed below the skin into squamous cell carcinoma and these ones need to be excised; the skin is then sutured.)

Post-op care consists of pain meds for the first one to two weeks as needed. Most cats do not need pain meds longer than three days; however, some do exhibit pain longer and pain meds can be continued. Robenacoxib (Onsior) is used for the first three days; if necessary, it can be used longer off label. No other medications are needed in most cats. In some, where lesions are deeper, topical lotions and bathing may be required.

It typically takes two to three weeks for the surgical sites to heal and the cosmetic result is excellent.

Although BISC remains in the outer layers of the epidermis, it will invade if not removed.[7] CO2 laser ablation removes the cancer early while it is still above the basement membrane and removal leaves the underlying normal epidermis. The use of various settings from high-power pulsed settings in the keratinized layers and lower-powered pulse settings when near the normal viable epidermis allows for precise and time-efficient surgery. More importantly it keeps the cat from developing fatal, invasive squamous cell carcinomas.

David D. Duclos, DVM, DACVD, is a small-animal practitioner in Lynnwood, Wash., where he is the owner and clinical dermatologist at the Animal Skin & Allergy Clinic. He is an associate clinical instructor for the Western University College of Veterinary Medicine in Pomona, Calif., and teaches senior veterinary students as externs at his clinic. He frequently hosts veterinary students from other veterinary medical colleges around the U.S. and from Europe who are seeking to learn about the specialty of veterinary dermatology during their third and fourth year of veterinary school. In addition, he teaches veterinary residents in dermatology who are seeking to learn more about laser surgery for two- to four-week externships sponsored by the American College of Veterinary Dermatology. He has authored a number of book chapters and scientific papers on various subjects in veterinary dermatology, and lectures extensively in North America and Europe. Dr. Duclos is well known in the veterinary dermatology specialty for his expertise in CO2 laser surgery and for his interest in clinical photography.

I can’t live without my laser!

Easy to use, fun to use, neat to do surgeries we would not have tried with a scalpel, and the only piece of technology that gives us income and profit every day that we use it, which is five days a week.